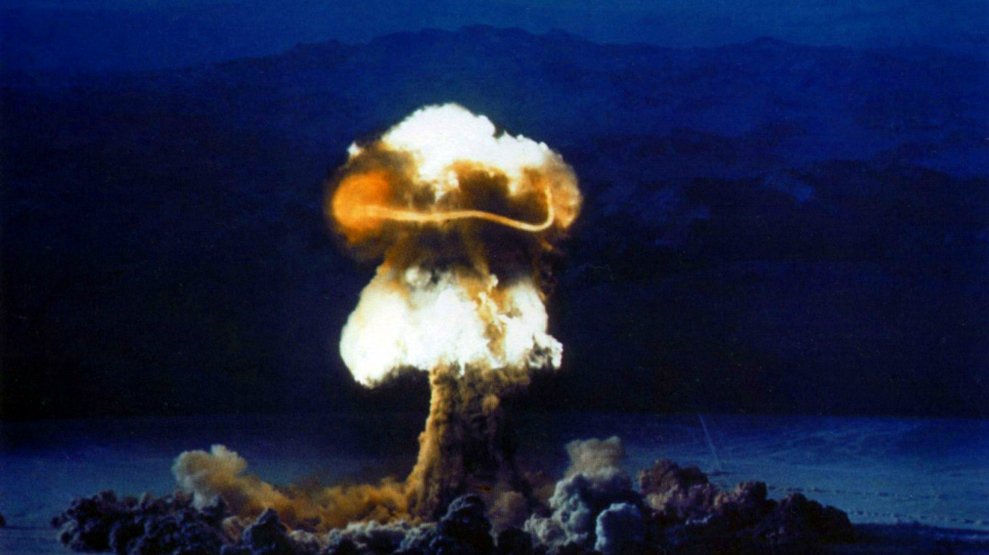 The atomic bomb was born in the desert. In the early hours of July 16, 1945, after a spate of bad weather, a 20-kiloton plutonium-based nuke referred to as “the gadget” detonated near Alamogordo, New Mexico. Firsthand testimonies of the test, codenamed Trinity, converge on the uncanny axis of awe and dread. The Manhattan Project’s Chief of Field Operations, General Thomas Farrell, wrote that “the strong, sustained, awesome roar…warned of doomsday and made us feel that we puny things were blasphemous.”

The bomb produced a massive cloud column that drifted in several directions, dusting large swaths of the surrounding region with radioactive snow—fallout that settled on buildings, plants, and animals, and that continued to permeate the air as invisible particulate in the weeks and months that followed. Five years later, the Nevada Test Site was established to continue the work that Trinity set alight.

Although the mushroom cloud became the icon of American nuclear activity in the 20th century, the harms of these bombs did not fade with their dimming fireballs. No group in the US understands this better than the downwinders, communities throughout the American Southwest and beyond who were exposed to the fallout of the military’s domestic nuclear test program.

In 1990, the US government passed the Radiation Exposure Compensation Act (RECA), which provided financial remuneration to downwinders who had contracted cancer or other illnesses linked to radiation exposure. (The law also provided compensation for certain on-site test participants and uranium miners.) As of April 2018, the program had awarded more than $2.2 billion to some 34,370 claimants.

As the law was written, however, only downwinders in specific counties in Arizona, Utah, and Nevada were eligible for compensation. Even residents of New Mexico, the site of the Trinity test, were excluded. Since the law was passed, studies and fallout reconstructions have suggested that the health impacts of the nuclear tests likely extend to areas as far away as Idaho, Montana, and Guam. Residents in those far-flung locales have provided vivid testimonies of glowing dust, strange maladies befalling livestock, and cancer clusters ravaging whole families.

For more than a decade, civic groups have lobbied lawmakers, unsuccessfully, to open RECA to a broader population of downwinders. That Congress has so far balked at those proposals is a testament to many factors; legislative decisions are informed not only by science but by moral and political calculus. But lawmakers’ inability to come to terms on who suffered, and on who deserves reparations for that suffering, points to a little discussed weak spot of modern politics: its uneasy relationship with uncertainty.

RECA’s compact delimitation of “affected areas” was based on dose estimates produced by the Department of Energy’s Off-Site Radiation Exposure Review Project—a complicated calculation that drew from atmospheric transport models, reconstructions of fallout patterns, and reports of dosimeters and other radiation recorders. The bill was amended once, in 2000, to include a larger population of uranium workers and to expand the time frame, eligible diseases, and geographic locations covered. Two years later, in response to a congressional mandate, the Health Resources and Services Administration commissioned the National Research Council (NRC) to review the RECA program and determine if additional populations should be covered. Their final report was published in 2005. Based in part on mortality and disease-incidence data on atomic bomb survivors in Japan, uranium miners in the US, and Utah schoolchildren exposed to fallout from the Nevada Test Site, the committee concluded that in most cases involving downwinders who had been excluded from RECA, “it is unlikely that exposure to radiation from fallout was a substantial cause to developing cancer.”

But radiation epidemiology is a science of uncertainty, and tracing a person’s illness to a single exposure event can be challenging even in seemingly clear-cut cases. Although high doses of radiation are known to lead to disease and death, the effects of lower doses are far less predictable. Moreover, an individual’s radiation dose—the amount of radiation that he or she internalizes—depends on the person’s age, sex, diet, and pre-existing risk factors; weather conditions; and the characteristics of the nuclear event itself. Extrapolating results from one nuclear event to another, as the NRC study did, is bound to introduce some error.

Consider the Trinity test, which has been consistently ignored by lawmakers. According to the Los Alamos Historical Document Retrieval and Assessment (LAHDRA), conducted in 2010 for the Centers for Disease Control and Prevention, previous efforts to determine exposures from Trinity ignored the specific characteristics that distinguished it from all other subsequent tests. Unlike tests conducted at the Nevada Test Site, the Trinity “gadget” detonated only 100 feet from the ground. At this height, more organic material would’ve been swept into the explosion and returned to the earth as fallout. Another compounding factor was the relative inefficiency of the device. Of the 13 pounds of fissile material contained in the device, only about 2.6 pounds exploded; the rest was dispersed into the environment, where it remained radioactive.

The LAHDRA report also faulted previous studies for failing to adequately account for internal exposure, caused by the inhalation or ingestion of radioactive material. Research shows that internal exposure is significantly more harmful to the human body than the external exposure that occurs, say, when X-rays or other high-energy radiation penetrate the skin. Internal dosages are influenced by occupation, diet, local environment, and other sociodemographic factors. Any assessment that does not account for those factors is incomplete. And, according to the LAHDRA report, no assessment has properly accounted for the internal radiation dosages experienced by residents near the Trinity site.

In the case of the Trinity test, there’s reason to believe that sociodemographic factors would have been significant. During the 1940s, New Mexican communities were largely agrarian; most people were farmers or ranchers who grew their food, hunted and fished, and drank water collected from cisterns or holding ponds. If those sources were contaminated, residents would likely have been at an increased risk for radiation-linked illnesses.

Last summer, members of the New Mexico community organization Tularosa Basin Downwinders Consortium (TBDC), along with representatives from the Navajo Nation, argued in a Senate Judiciary hearing for amending RECA. Stated TBDC co-founder Tina Cordova, “The New Mexico downwinders are the collateral damage that resulted from the development and testing of the first atomic bomb.”

“The New Mexico downwinders are the collateral damage that resulted from the development and testing of the first atomic bomb.”

Their appeals appear to have fallen on receptive ears. This March, a bipartisan coalition of US Senators, including New Mexico Senators Martin Heinrich and Tom Udall, reintroduced Senate Bill 947 (S. 947), “Radiation Exposure Compensation Act Amendments of 2019.” It is the most recent in a long line of bills that attempt to expand the RECA’s coverage. Among other changes, it seeks coverage for downwinders in New Mexico, Colorado, Montana, Idaho, and Guam. A companion was introduced in the House in July.

Meanwhile, the National Cancer Institute (NCI) is currently conducting a three-phase study on the diet and lifestyles of mid-century New Mexicans. The models generated in this study may help scientists draw firmer links between present day cancer cases and the Trinity test. In an email, NCI spokesperson Michael Levin confirmed that the results of the study are anticipated to be published in late 2019.

Like other epidemiological studies of its size, the NCI’s study has been expensive to run and frustratingly time-intensive. And time is precisely what many downwinders feel they don’t have. More than 70 years has passed since the Trinity test. Many downwinders have passed away or are battling cancers and other diseases. Over time, it becomes increasingly difficult to demonstrate that a disease was caused by nuclear fallout rather than, say, cigarettes or bad luck.

The government, meanwhile, plods along at its own pace, unconstrained by the length of a single lifetime or the distressing span between a diagnosis and its terminal conclusion. In response to a news article about S.947 posted to the Idaho Downwinders public Facebook page, one commenter wrote, “The government are just waiting for all of us to die off so they won’t have to be bothered with it.”

In its 2005 review of the RECA law, the National Research Council stated that, although scientific recommendations were meant to inform policy, the “attendant policy decisions must come from the larger body of citizenry” and “applying this new scientific knowledge may require additional societal value-based decisions.” This is particularly true of probability-based information on cancer epidemiology. When there is simply not enough data available to definitively estimate risk, the question of compensating the citizens who live in the long shadow of the nuclear testing era becomes a moral one: How much uncertainty can we stand?