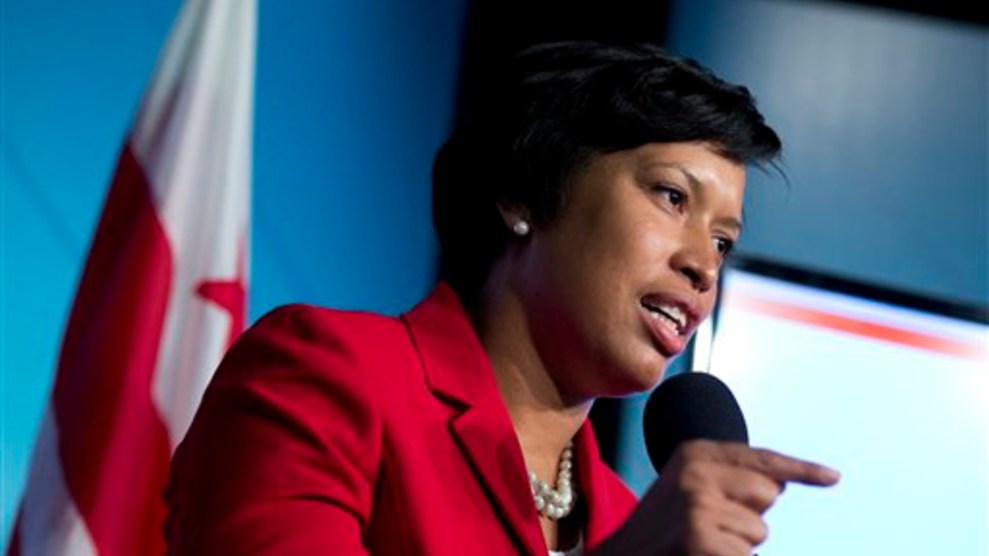 In search of additional space to house migrant children, the Trump administration awarded a contract this month to a company that wants to open a facility in the administration’s own backyard of Washington, DC. On Tuesday, Mayor Muriel Bowser announced that she would not allow the center to open in the staunchly Democratic city.

“We have no intention of accepting a new federal facility,” Bowser said in a statement Tuesday in response to an inquiry from Mother Jones, “least of all one that detains and dehumanizes migrant children.”

The detention center would house up to 200 unaccompanied migrant children from ages 12 to 17 in the Takoma neighborhood in Northwest Washington. It would be run by Dynamic Service Solutions, a company based in nearby National Harbor, Maryland, that has no record of experience running facilities for children.

The Department of Health and Human Services, which is responsible for caring for children who arrive at the border without a parent or legal guardian, awarded Dynamic Service Solutions a $20,549,911 grant this month to operate the shelter, according to a statement sent to Mother Jones by the press office of HHS’s Administration for Children and Families (ACF). Washington, DC, has several options to prevent the center from opening, including passing legislation to ban the facility and using regulatory restrictions. The shelter program is being called ChildrenFirst DC, according to the ACF press office.

Brandon Todd, the DC Council member who represents the area where Dynamic Service Solutions wants to operate the shelter, said he was “shocked and appalled” by the shelter proposal. HHS has been criticized for inadequate medical care at its contractors’ shelters, as well as for failing to provide required legal services for children in its custody.

ACF’s press office pushed back against criticism of its shelters, which are sometimes conflated with the Customs and Border Protection temporary holding facilities at the border where people have been held in cages. It stressed that children in HHS custody receive educational services and have access to recreational activities including sports and board games. “Unfortunately, uninformed individuals continue to perpetuate erroneous and irresponsible stories which only hinder our ability to run this program successfully and unify children with their parents, family member or other suitable sponsor,” the press office said.

In 2017, Dynamic Service Solutions was awarded an $8.7 million contract by the US Department of Health and Human Services to shelter and care for unaccompanied minors in the United States. The new $20.5 million contract awarded in August has not previously been reported.

The company recently posted job openings in Washington for bilingual youth care workers and teachers. One posting, for a “lead teacher” position, stipulates that the teacher will have to meet the Office of Refugee Resettlement guidelines, which dictate that unaccompanied minors must receive “a minimum of six hours of structured education.”

But the DC government, which has consistently opposed Trump administration policies, would have none of it. “Washington D.C. will not be complicit in the inhumane practice of detaining migrant children in Warehouses,” Bowser stated.

ACF said there are currently about 8,100 unaccompanied children in its custody, down from a record high of about 14,000 in November. Children in HHS care are generally released to live with sponsors who are usually parents or close relatives. ACF said children are spending 45 days on average in HHS custody, down from a peak of 93 days in November. The average stay was 34 days in January 2016.

Dynamic Service Solutions referred Mother Jones to HHS’s Office of Refugee Resettlement, the part of ACF responsible for unaccompanied children. The company has nine employees listed on LinkedIn. According to its website, the company has worked with the US Army Corps of Engineers to train US soldiers and Iraqis on electrical safety and provided engineers and technicians to other federal agencies, including the Federal Emergency Management Agency and the Department of Health and Human Services.

This story has been updated with new information from the Administration for Children and Families.