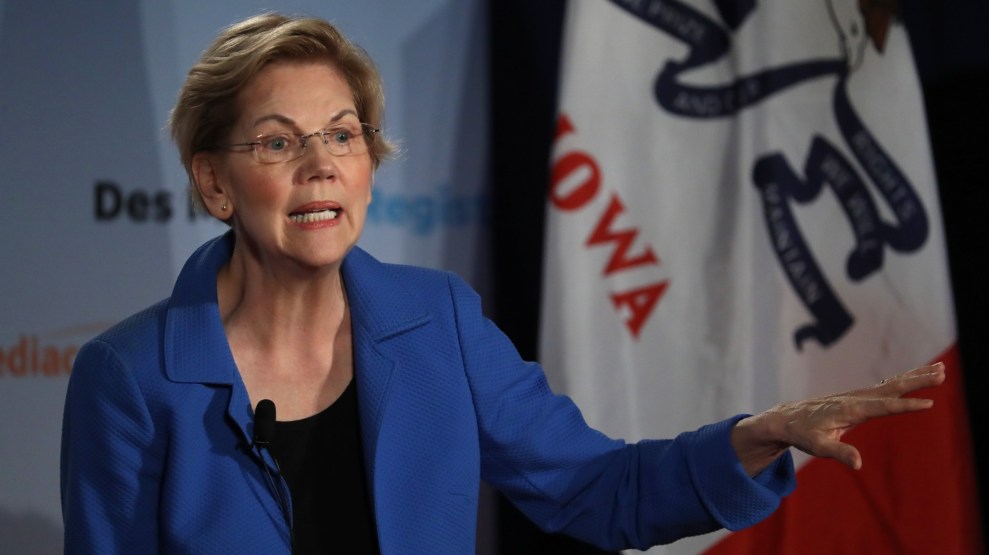 The deadly shootings last week in Dayton, Ohio, and El Paso, Texas, catapulted gun violence to the forefront of the Democratic presidential primary. Now Sen. Elizabeth Warren (D-Mass.) has laid out a detailed plan to combat the problem.

The proposals, which Warren says will reduce deaths from gun violence by 80 percent, were released Saturday morning in advance of a candidate forum in Iowa hosted by three gun control advocacy groups.

“We might not know how to get all the way there yet,” Warren wrote in a post on Medium, where she has laid out most of her campaign’s policy proposals. “But we’ll start by implementing solutions that we believe will work.”

Like many of her Democratic rivals, Warren supports an assault weapons ban and universal background checks before gun purchases, but her plan also would hike taxes on gun manufacturers, establish a federal licensing system for gun owners, set a uniform, one-week waiting period for purchases, bar anyone convicted of a hate crime from owning guns, and support urban-intervention programs.

“The next president has a moral obligation to use whatever executive authority she has to address the gun crisis.”

Warren’s most ambitious ideas, such as raising tax rates by 30 percent on guns and 50 percent on ammunition, would require congressional approval, but other solutions detailed in her plan would not. She proposes signing executive orders to raise the minimum age for gun purchasers to 18, crack down on gun trafficking across state lines, and reverse Trump administration rules that have allowed weapons to be modified in ways that evade legal restrictions. “The next president has a moral obligation to use whatever executive authority she has to address the gun crisis,” Warren wrote. “But it is obvious that executive action is not enough.”

Other candidates, like Sens. Cory Booker (D-N.J.) and Kamala Harris (D-Calif.), have also released plans in recent weeks to curb gun violence. Harris proposed several executive orders, which she has promised to implement if Congress drags its feet on gun control legislation, while Booker’s 14-point plan was the first to introduce a federal licensing proposal, which Warren has since adopted.

More than any Democratic proposal so far, Warren takes direct aim at the National Rifle Association, which she said “represents a particularly noxious example of Washington corruption at work.” Her plan would close federal loopholes that benefit the influential gun rights group and fully staff the embattled Bureau of Alcohol, Tobacco, Firearms and Explosives, an agency that NRA lobbyists have worked for decades to weaken.

Using $100 million in grants, Warren would direct federal researchers to look into the causes of gun violence and find evidence-based ways to prevent it. “Every year, I will send Congress an updated set of reforms based on this new information,” she wrote. “That’s how we’ll meet our goal.”