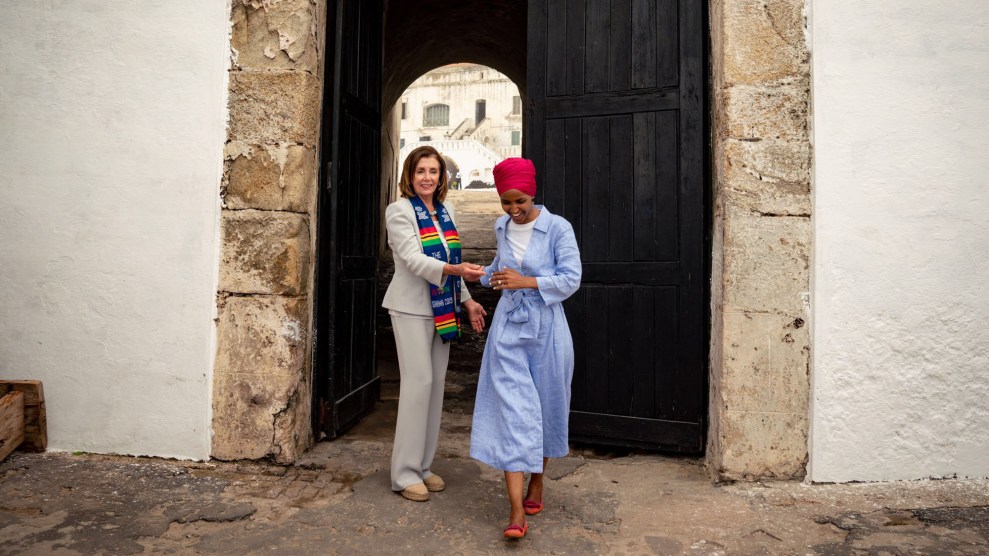 So much for the apparent feud between House Speaker Nancy Pelosi (D-Calif.) and the progressive freshman congresswomen who make up “the squad.” Pelosi joined Rep. Ilhan Omar (D-Minn.) on a recent trip to Ghana, standing in solidarity against President Donald Trump and his supporters, who have said that Omar—who emigrated from Somalia as a child and became a US citizen—should go back to the country of her birth.

Omar posted to Twitter photos of herself hand-in-hand with Pelosi beneath the “Door of Return” in Ghana. “The said ‘send her back,'” she wrote, “but [Pelosi] didn’t just make arrangements to send me back, she went back with me.”

They said “send her back” but Speaker @SpeakerPelosi didn’t just make arrangements to send me back, she went back with me ✊🏽

So grateful for the honor to return to Mother Africa with the @TheBlackCaucus and commemorate The Year of Return! #Doorofreturn #Ghana pic.twitter.com/0yVBLcAEs5

The trip, attended by 13 members of the Congressional Black Congress, honored the Year of Return, an effort to promote tourism to Ghana by members of the African diaspora 400 years after the first enslaved Africans reached the United States in 1619.

Last month, in the midst of a public dispute between Pelosi and the squad—a group of progressive first-term congresswomen of color that includes Omar, Rep. Alexandria Ocasio-Cortez (D-N.Y.), Rep. Ayanna Pressley (D-Mass.), and Rep. Rashida Tlaib (D-Mich.)—Trump tweeted that the squad members should “go back” to their home countries. All four are US citizens, and only Omar was born outside the United States.

Despite the political differences between Pelosi and her more progressive colleagues, the photos of the speaker smiling with Omar suggest that Democrats can still band together for a cause: trolling Donald Trump.