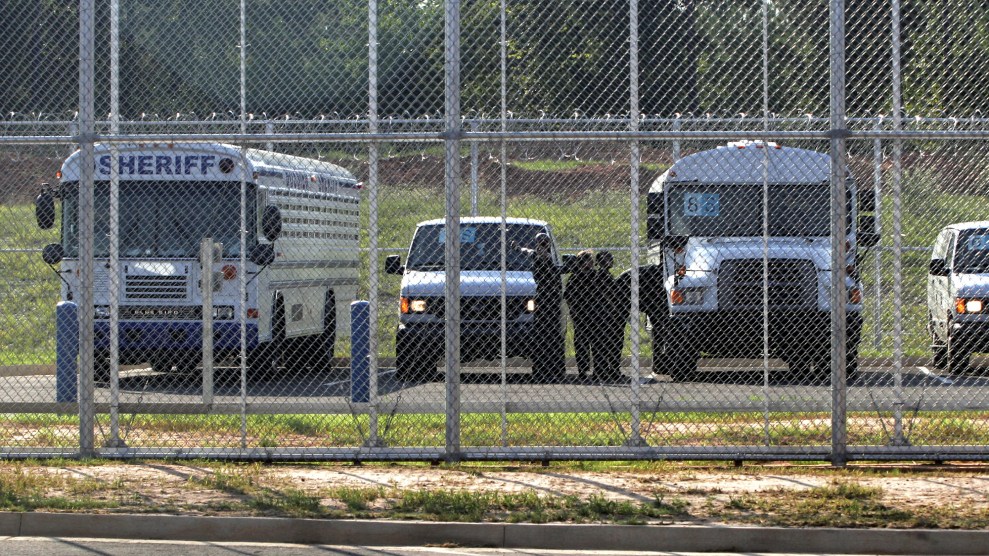 Immigrants held at a Louisiana jail say they were beaten and pepper-sprayed Friday after protesting their indefinite detention at the hands of Immigration and Customs Enforcement.

Mother Jones obtained several text messages sent by detainees to attorney Lara Nochomovitz, who represents clients held in the Bossier (Parish) Sheriff Medium Security Facility, about 30 miles north of Shreveport. Nochomovitz said she first received a phone call Friday afternoon from one of her clients, who told her detainees were fainting after being pepper sprayed.

“There are lots of cops who came from another prison, they beat up the Cubans, they pepper spray them and handcuff them,” read one of the messages in Spanish from a man inside the jail.  “There’s even an ambulance here. Help us please this is ugly!”

Another text message from the same man said that Cuban immigrants detained there were asking for release on bond and “to change the judge because he’s violating our rights.”

Lt. Bill Davis of the Bossier Parish Sheriff’s Office confirmed that a “small disturbance around lunchtime” caused a lockdown at the facility for a few hours. He said that a group of about 30 ICE detainees began yelling at the lunch table, and though the immigrants didn’t get physically violent, deputies used pepper spray to “deescalate” the situation. One of the detainees had to be transported to a local hospital “for anxiety attack issues” stemming from Friday’s incident, said Davis, who denied that the use of force went beyond pepper spray.

“There are lots of cops who came from another prison, they beat up the Cubans, they pepper spray them and handcuff them…Help us please this is ugly!”

The incident Friday seems to have started with a hunger strike that has been “going on and off for a a while,” Nochomovitz said, because detainees wanted ICE to “come and let them know why nobody was getting out.” Last April, the US Department of Justice issued an order directing immigration judges to keep immigrants detained instead of releasing them on bail; Bossier officials said the average length of stay for an ICE detainee there is between 60 and 90 days, but it can be longer.

Davis said he had heard that the immigrants had complained about the long detention times, and the protest “appears to be linked to what they were overall frustrated about,” he said. “We are in contact with ICE officials to ensure that they do adequate visits with them, so that they can feel like their due process of law is maintained.”

The Bossier facility houses regular inmates as well as immigrant detainees; according to Davis, the facility started contracting with ICE a year ago. About 300 of the 600 men imprisoned there are immigrant detainees, a large number of whom are Cuban, Davis said.

Until January 2017, when Barack Obama ended the “wet foot, dry foot” policy, Cubans who set foot on US soil were released and set on the path to citizenship, a benefit provided to the citizens of no other nation. Now Cubans are treated like everybody else: jailed, pushed through harsh courts, and then deported.

Nochomovitz said her clients inside Bossier have complained that they’ve been placed in solitary confinement after asking for medical help, that they aren’t allowed to go outside every day, and that there are no in-person family visits allowed for ICE detainees. These complaints echo a July piece in the Washington Blade by Cuban asylum-seeker Yariel Valdéz González, who wrote that upon arriving at Bossier other Cubans greeted him by saying, “Welcome to hell.”

Meanwhile, hunger strikes are a familiar tactic inside ICE detention facilities. In 2015, more than 300 immigrants stopped eating to protest the conditions at a detention center in Adelanto, California. Last March, NPR reported that the hunger strike held by asylum-seekers at the River Correctional Center in Ferriday, Louisiana, was the sixth such strike at a detention center in the first three months of 2019. And just last week, three Indian nationals seeking asylum in the United States were forced to get IV drips during their third week of a hunger strike in Texas.

An ICE spokesperson said Friday that the agency was not aware of any ICE detainee who was on a hunger strike at Bossier. The spokesperson did not respond to questions regarding their communication with detainees or the length of their time in detention.

Hours after the incident Friday, Nochomovitz received an email from the Bossier Parish Sheriff’s Office saying that the medium security facility would be shut down for all visitation for the weekend.