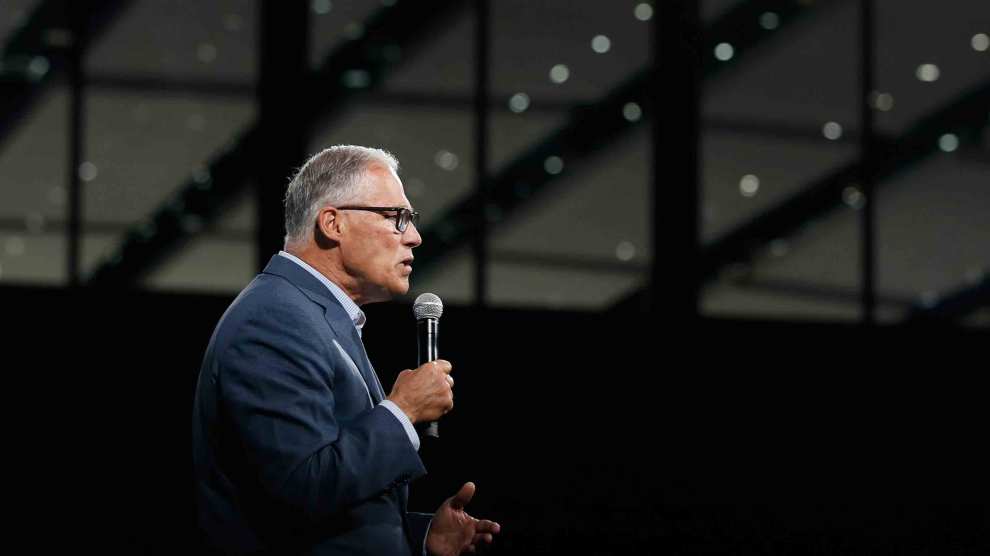 Washington Gov. Jay Inslee, the self-described climate candidate, announced on Wednesday night his decision to drop out of the race for the 2020 Democratic presidential nomination. His departure was greeted by claims this his lackluster results in opinion polls proved that climate change doesn’t move Democratic voters. Nate Silver, editor in chief of FiveThrityEight, became one of the first to make the case:

Inslee, who could never improve on ~1% in the polls despite an intense focus on climate change, is a datapoint against the proposition that Democrats' votes are deeply motivated by policy concerns. https://t.co/JBA1fVJ3Ro

It’s a narrow view to take on the impact of Inslee’s single-issue candidacy. While he was never in the top tier, environmentalists credit his prioritization of climate with pushing the issue forward, simply by changing the frame of reference and establishing what a genuine climate action plan would look like. His early and focused embrace of the issue brought nearly the entire field on board, prompting them to release similar plans.

Whether or not the DNC approves resolutions authorizing a climate debate this week, Inslee’s campaign helped build momentum behind the proposal. Amid his calls for a formal climate debate, two forums on the issue were scheduled for September, and candidates are facing pressure to attend; Kamala Harris recently canceled a conflicting fundraiser so she could be at the first event. While Inslee was not set to appear at these forums, which have adopted the DNC’s increasingly stringent debate qualification rules, his presence on the race’s early stages helped make them a reality.

Without the polling numbers needed to access to the upcoming debates and forums, Inslee’s days as a candidate were surely numbered. But he used his time in the race to release more than 200 pages of climate change policies spanning the transportation, food, and energy sectors, and touching on jobs, justice, and rural issues. Those ideas have returned again and again in the national conversation around climate and a Green New Deal.

All of this is evidence of the difference a single-issue candidacy can make. As I wrote in a profile of Inslee and his presidential run for Mother Jones‘s March/April issue, many analysts expected the campaign would play this role:

That reasoning may not take him to the White House, but just as Sanders spotlighted economic inequality in 2016, Howard Dean drove Democratic opposition to the Iraq War in 2004, and Ross Perot’s third-party run in 1992 fixated on balancing the federal budget, Inslee’s unrelenting focus could open the Overton Window a bit wider. “It is expected now that candidates will talk about climate change,” says Jesse Ferguson, a Democratic consultant and former top spokesperson for Clinton’s 2016 campaign. “There was a gauntlet that Jay Inslee laid down when he announced. You can’t just talk about climate—you’ve got to mean it.”

“It’s hard to see how he doesn’t pull the entire field toward the issue,” says Anthony Leiserowitz, director of the Yale Program on Climate Change Communication. While voters want politicians to reflect their priorities, candidates’ rhetoric does shape the agenda. The more that candidates, not just Inslee, talk about climate, the more voters “could easily be tipped into saying, ‘I got it—this is a real issue,”’ Leiserowitz says.

Silver may be right that climate policy may not have driven voters in the chaotic Democratic primary, especially one in which most serious contenders have released plans tackling the issue. But joint polling by the Washington Post and ABC shows is that climate is a problem for President Trump: his position is deeply unpopular, as his broader treatment of the environment remains a major electoral problem for the president among millennials and suburban women.