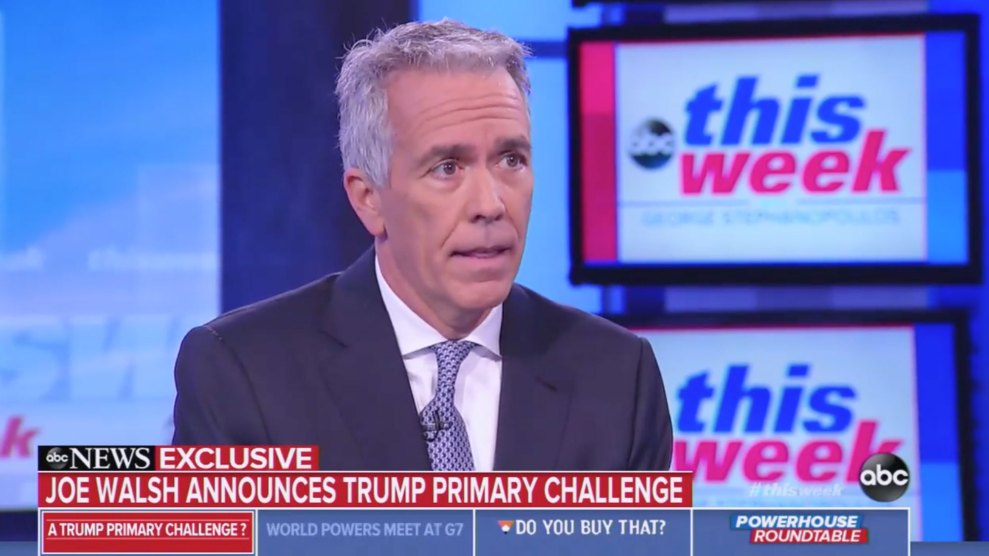 Former Republican lawmaker Joe Walsh officially announced his longshot run for the presidential nomination on Sunday, challenging President Donald Trump. After hinting at it in recent interviews, Walsh announced his candidacy in an interview with George Stephanopoulos on ABC’s This Week, criticizing the president and attempting to address his former support of Trump and his own long history of racist statements.

When @GStephanopoulos pointed out the massive uphill climb Joe Walsh has thanks to President Trump's overwhelmingly high approval rating within the party, the controversial former congressman argued that conservatives don't have an alternative to Trump https://t.co/JmbrJf0GKe

The conservative radio show host from Illinois served one term in the House of Representatives. He was a vocal Trump supporter in 2016, tweeting, “if Trump loses, I’m grabbing my musket. You in?” Now he hopes he can flip other former Trump supporters to weaken his base.

“I have—I helped—I helped create Trump. There’s no doubt about that, the personal, ugly politics. I regret that. And I’m sorry for that,” Walsh told Stephanopolous. “I went beyond the policy and the idea differences and I got personal and I got hateful. I said some ugly things about President Obama that I regret.”

Walsh has a long history of racist comments. He promoted birtherism and other conspiracy theories against former President Barack Obama. He also defended the use of racial slurs on his nationally syndicated radio show, among other controversial statements.

Walsh joins former two-term governor of Massachusetts Bill Weld in challenging the president for the Republican nomination. Weld has called Trump a “clear and present danger to our country, to the globe and to himself.”

.@realDonaldTrump is a clear and present danger—to our country, to the globe and to himself. #AmericaDeservesBetter#25thAmendment

When asked about Walsh’s challenge, the Trump campaign reportedly commented a single word: “Whatever.”