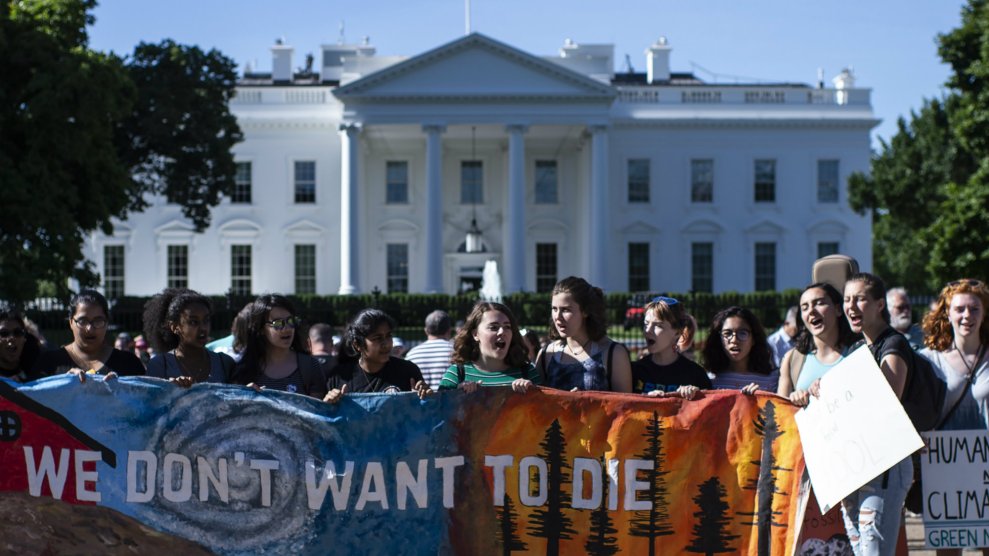 A group of teenage climate change protesters gather in front of the White House in May 2019.Eric Baradat/AFP/Getty

Food shortages, social disruption, and riots. That’s the future 19-year-old Giovanni Tamacas envisioned during the 10 days he starved himself in the nation’s capital in a hunger strike protest at the lack of action to thwart the climate crisis.

A student at the University of California in San Diego, Tamacas spent seven days baking in the sun in front of the White House and three more at an American Civil Liberties Union advocacy institute. He also staged a “die-in” in front of the US Capitol building.

Tamacas’s mother is from Vietnam, and his father is from El Salvador—two places expected to be hit hard by the chaotic climate changes that will come from rapidly rising temperatures.

In an interview at the Smithsonian Natural History Museum, Tamacas recited the projections that scare him the most: an ice-free Arctic and a disrupted jet stream that will lead to droughts, floods, and grain scarcity. Walking through the dinosaur fossil exhibit, he compared humanity’s trajectory to previous mass extinctions.

His father’s family in El Salvador is seeing coffee and corn crops failing. At least 1.4 million climate migrants could flee their homes in Central America in the next three decades.

“I have to do something like this in order to show people how hungry my generation will be,” Tamacas said.

About a week into his strike, Tamacas could only sleep four or five hours a day. One night he got up to refill his water bottle and collapsed from dizziness.

Tamacas was visiting Washington DC in the middle of a historic heatwave, with temperatures some days feeling as hot as 110F. Global data shows this July was the hottest ever recorded.

The heat and physical weakness compounded Tamacas’s anxiety over the climate crisis.

“I did cry. And I did feel extreme frustration and hunger and just overwhelming feelings of sadness at times,” he said. “But at the end of the day I remembered what I was fighting for and that’s what kept me going”

People from a wide spectrum of political affiliations approached Tamacas in front of the White House, he said. One called him an idiot. But others were shocked when he explained the urgency of the climate emergency, as well as an ongoing extinction crisis.

In a blogpost explaining his hunger strike, Tamacas said: “People need to be terrified. We are racing toward the extinction of human beings.” He calls the US government “criminally complicit.”

Tamacas also protests with the group Extinction Rebellion. On his campus, he has chained himself to trees and camped in a tent outside the university library during final exams.