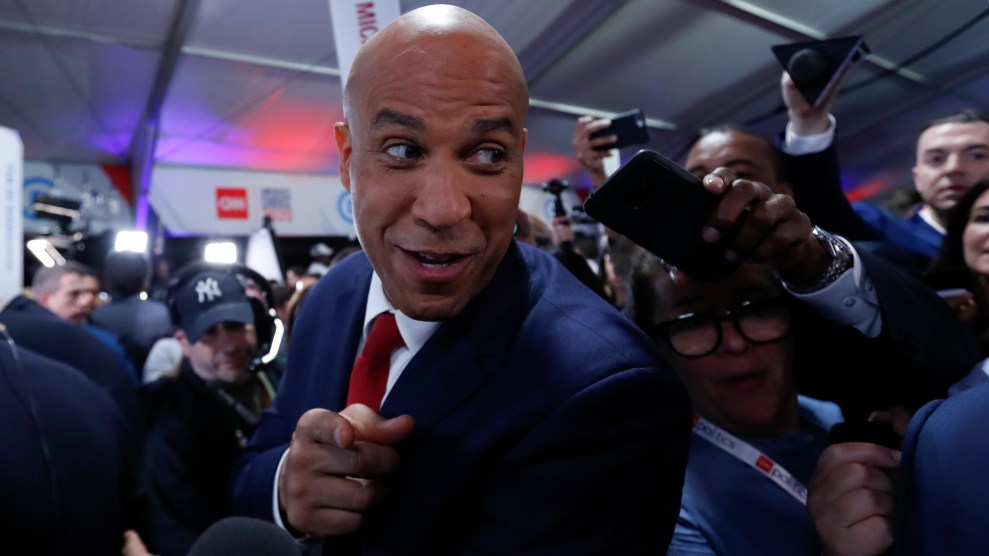 Cory Booker was the clear winner of Wednesday night’s Democratic presidential debate, according to members of the progressive activist group Indivisible.

Indivisible conducted a flash poll via text message at the end of the party’s debates on Tuesday and Wednesday, asking thousands of members which candidate impressed them the most. Twenty-four percent of the more than 4,700 respondents on Wednesday said they were most impressed by Booker, the New Jersey senator. Sen. Kamala Harris of California, former Vice President Joe Biden, and former Housing and Urban Development Secretary Julián Castro garnered 19, 14, and 11 percent of the vote, respectively. No other candidates received more than 10 percent of the vote.

On Tuesday, Massachusetts Sen. Elizabeth Warren was the runaway favorite in Indivisible’s flash poll, winning 52 percent of the vote.

Booker outdid his previous performance among Indivisible members during the first Democratic debates in Miami last month. Then, Booker came in second to Warren. The debate lineups were shuffled between the June and July sessions, so it’s hard to make an apples-to-apples comparison. But Booker’s performance against Harris—who shared the stage with Booker in June and won 65 percent of that debate’s Indivisible vote—represents a shift.

Booker’s breakout moment came in the midst of a boxing match between Biden and Harris over their health care positions. Biden accused Harris of being impractical as she described her vision for a single-payer system that reserved a limited role for private insurance; Harris slammed the former vice president for not going far enough to hold insurance companies accountable. As they went round after round, Booker made this point. “Let me just say that the person that’s enjoying this debate most right now is Donald Trump, as we pit Democrats against each other, while he is working right now to take away Americans’ health care,” Booker said. (Booker did not back a Medicare-for-All plan, promising a system that preserves’ Americans existing private insurance coverage.) “But this pitting progressives against moderates, saying one is unrealistic and the other doesn’t care enough, that to me is dividing our party and demoralizing us in face of the real enemy here.”

That moment perhaps explains Booker’s surge among Indivisible members. The organization often backs the boldest items on the progressive wishlist, such as single-payer health care, and Booker has shied away from supporting that and other far-left positions on the campaign trail. But Indivisible’s raison d’être, above all else, is to defeat Trump in 2020, and on Wednesday night’s debate stage, Booker signaled he shared its sense of urgency.

Lively debates are a sign of a strong democracy. At the end of the primary season, we’re committed to uniting 💯 behind the Dem candidate to defeat the Trump agenda. Like @CoryBooker said, we are #Indivisible. #DemDebate pic.twitter.com/M7TKjaMbiZ

Indivisible, which was founded in 2017, counts more than 1 million members across the country, most of whom are women.