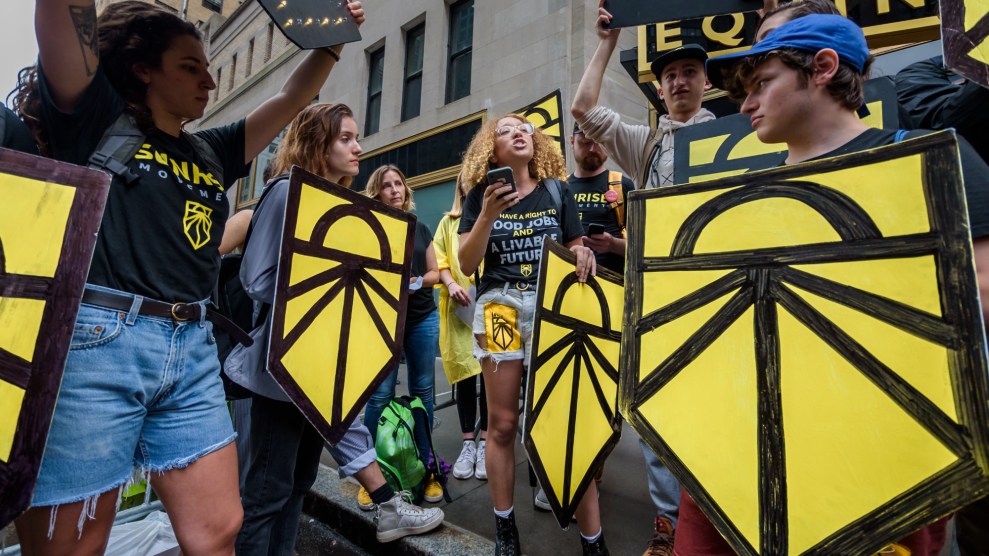 On Saturday, the Democratic National Committee officially decided that the party won’t be holding a debate focused entirely on climate change—and will continue to penalize any presidential candidate who takes part in an outside climate debate.

Since the start of the election, the Democratic Party has said it wouldn’t allow candidates to participate in outside debates and would disqualify from the DNC-sanctioned debates anyone who did. But climate activists, especially the youth-led Sunrise Movement, have been pressuring the DNC to hold its own climate debate. Nearly every Democratic candidate went on the record in favor of a climate debate. At the beginning of August, the DNC said it make a final decision during its annual summer meeting, which took place last weekend.

Although there are upcoming climate forums where candidates can speak about their plans to grapple with climate change, a climate debate would have allowed candidates to discuss their plans on the same stage at the same time and press each other on the issue in real time. As Mother Jones’ Rebecca Leber wrote earlier this month, “MSNBC and CNN have announced forums for September, but debate proponents say forums tend to draw fewer viewers and lack the same level of pressure that having all the candidates onstage at the same time generates.”

I caught up with Stephen O’Hanlon, 23, who is one of the Sunrise Movement’s eight original founders, to ask about the reaction to the DNC’s decision and how the group plans to push candidates to talk more about climate in this election.

Let’s start with the personal: When did climate change become an issue you care so deeply about?

Growing up, climate wasn’t really on my radar very much. I was a climate denier for a while and then eventually in high school, I had science classes and realized that climate change was real. I started recycling, but it never was something that was really at the top of my mind. That changed during my first semester of college when I took a trip with a group to West Virginia and saw the effects of coal mining there.

“Adults in the room are not taking this crisis seriously. And it’s on us to push the generation in power to start treating this like the emergency that it is.”

There were people not much older than me struggling with cancer and respiratory illnesses because of where they lived. This was one of the poorest places in America. It’s no mistake that poor and working class people were facing the brunt of that devastation. That made me see the issues around climate and environment in a totally different way, and made it clear this is a social justice issue.

What happened after you saw firsthand that environmental issues were social justice issues?

I got involved in the fossil fuel divestment campaign at my college. We were trying to get our school to stop investing in the companies causing devastation in West Virginia and all around the world. I helped to build support on campus for pressuring our school’s administration to divest. We saw on our campus, and on others, that we were making a lot of progress, but it didn’t feel like we were really at the scale we needed. We saw every year climate change getting worse and worse around us. And a big part of the reason why I helped start Sunrise is because it was clear that we needed a movement that was matching the scale of the crisis and contesting for political power in Washington and all around the country.

What message do you feel the Democratic Party sent with the decision not to hold a climate debate nor let candidates participate in an outside one?

It really cemented for us this understanding that Sunrise and so many other youth movements fighting for a livable future feel, which is that the adults in the room are not taking this crisis seriously. And it’s on us to push the generation in power to start treating this like the emergency that it is, and that we see and feel every day.

For our entire lives, politicians have seemed to be more concerned with who’s giving to their campaign or what is politically possible according to pundits in Washington, DC, than to what is actually necessary to give our generation a livable future. And our movement is about saying we need to give it everything we’ve got to fight for what scientists tell us is necessary to avert climate catastrophe in our lifetimes and to save our generation. We are going to relentlessly push for that and demand that every politician fight alongside us. If they don’t fight for us, then they don’t deserve to lead.

How do you see the role of Sunrise in pushing candidates to talk about climate change in the 2020 presidential race?

We’re really clear that we need the next president to make tackling climate change and passing the Green New Deal a top priority on day one. In order to do that, we need to be pressuring all the candidates on the campaign trail on a regular basis and pushing them to actually put forward a plan in line with the crisis and have real strategy for how they’re going to push this through.

When it comes to discussing climate change in elections, do you feel something has changed?

A big reason why we were pushing for a climate debate was because that would put the issue in the forefront of the political conversation in a really big way. We didn’t win a climate debate, but we did put the spotlight of the nation on how the debates and the presidential races for our entire lives have so poorly covered the crisis. In 2020, it’s already clear it’s going to be different, with CNN and MSNBC hosting town halls and forums next month. It’s really historic and not something that I think anyone would have thought was possible four years ago.