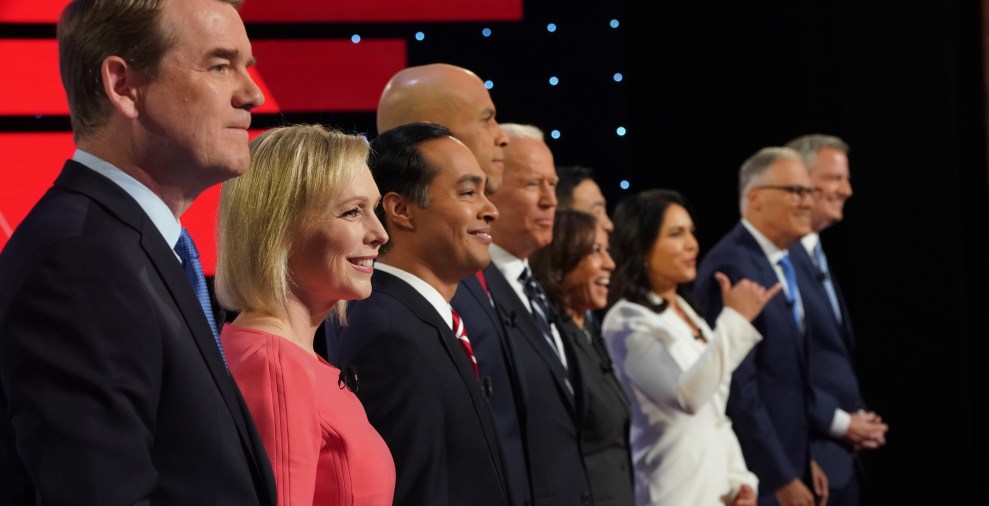 When members of the Democratic National Committee meet in San Francisco later this month, they will likely consider a resolution introduced by DNC Chair Tom Perez this week that activists say would kill chances of a formal, DNC-sponsored debate devoted to climate change. Since April, the campaign for a climate debate has grown from a far-fetched request from environmentalists and Jay Inslee to scoring endorsements from nearly the entire primary field.

But Perez has been reluctant to hold a climate debate, fearing it would lead to a proliferation of single-issue debates, when there are already a dozen opportunities for candidates to discuss climate in upcoming debates. The DNC membership has been split on this, with dozens of members backing an alternative debate devoted to the climate crisis—which is a competing resolution to Perez’s.

Perez’s “Resolution Recommitting the Democratic Party to the Work of Combating Climate Change and Creating Jobs by Growing Our Clean Energy Economy” was added on Thursday to the docket of proposals to be considered by the DNC’s resolutions committee ahead of an August 22 meeting in San Francisco. While reaffirming Democrats’ commitment to fighting climate change, at the very end of his proposal is a section that suggests the existing debate formats plus the two unofficial climate forums that are already scheduled in September should take the place of a debate:

WHEREAS, Democratic candidates for President of the United States are demonstrating their commitment to tackling the issue of climate change, having already scheduled two televised forums on CNN and MSNBC to discuss the issue, and debating the issue during each of the DNC-sanctioned presidential primary debates; THEREFORE BE IT RESOLVED THAT, Democrats will address the serious threat of climate change through bold and inclusive solutions that grow the clean energy economy and expand America’s middle class.

“This is a resolution discussing the importance of combating climate change,” DNC spokesperson David Bergstein says. “There are multiple other resolutions that address a climate change debate or forum. They’ll all be discussed at the meeting later this month.”

Climate activists, however, say this is Perez’s attempt to end demands for a full debate exclusively devoted to questions surrounding climate change. “DNC Chair Tom Perez submitted a resolution trying to kill the climate debate through backroom dealing,” Varshini Prakash, executive director of the Sunrise Movement, a progressive advocacy group that has been pressuring the DNC to hold a climate debate, said in a statement.

When the DNC resolution committee meets again, they will decide among three resolutions regarding a climate change debate. DNC executive committee member Christine Pelosi, who has supported a competing resolution signed by dozens of members for a climate debate, said the DNC resolutions may change before the meeting in August. That will be hammered out by the DNC’s resolutions committee in coming weeks. Perez “put out a resolution to state his position,” Pelosi says. “It doesn’t change our position… Otherwise we’re going to have this fight out on the DNC floor August 22. I think it’s still possible to figure out a way to compromise.”

MSNBC and CNN have announced forums for September, but debate proponents say forums tend to draw fewer viewers and lack the same level of pressure that having all the candidates onstage at the same time generates.

“The DNC has a choice to make,” Prakash said. “Will it allow the American public to judge which candidates will take the climate crisis as seriously as science and justice demand? Or will it allow millions of lives and livelihoods to fall by the wayside?”

Here’s the resolution, shared with Mother Jones by a member of the DNC: