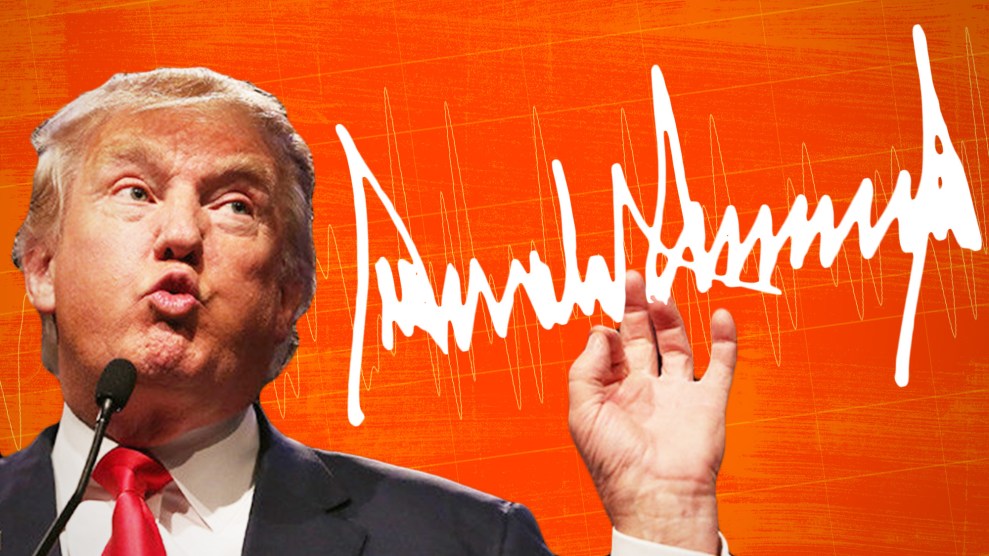 President Trump’s signature has been scrawled across 8×10 glossies, MAGA hats, and controversial executive orders. It’s been analyzed by handwriting experts and parodied by meme experts. But one thing stands out most about his signature: it looks like an audio waveform.

Through the miracle of science, researchers have been able to convert images into signals, and then signals into audio. Why not create sound from an image of the president’s signature?

Alas, the Mother Jones Forensic Audio Reconstruction Team was out of the office. So I sufficed by plugging in an image of Trump’s signature into a site called PIXELSYNTH, a project by computer programmer and media artist Olivia Jack, for an entirely non-scientific representation of the staccato slopes and peaks of one of the most powerful signatures in the world.

After a bit of tweaking, I got the following results:

I've always thought Trump's signature looks like an audio waveform. So I used a website to synthesize sound from it.@Pitchfork plz rate pic.twitter.com/zQwwqWl4Yd

Listen and let us know what you think it sounds like.

As one Twitter user suggested, it’s the “only thing to do with Donald Trump that has ever ended on a high note.”