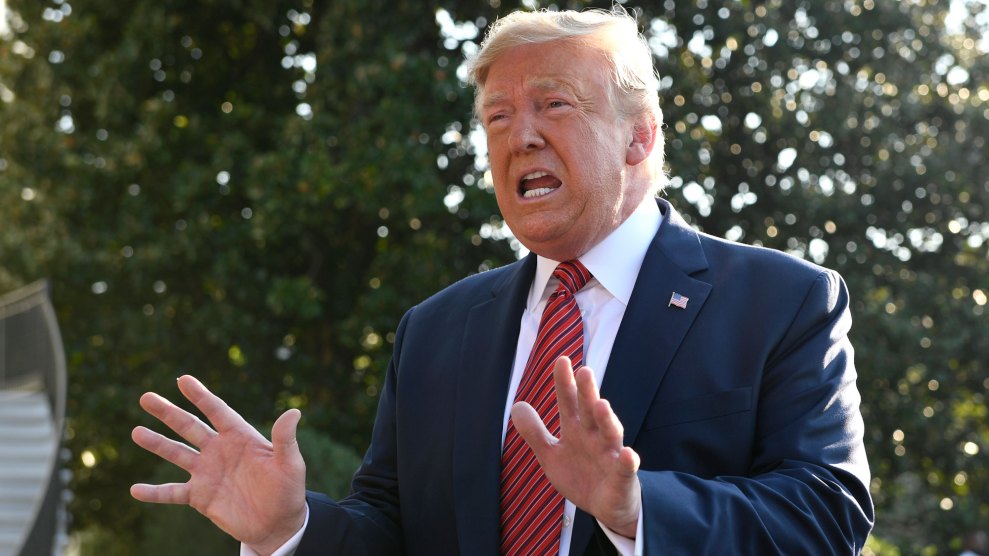 President Donald Trump talks with reporters on the South Lawn of the White House in Washington on Sunday. Susan Walsh/AP

Rep. Adam Schiff, chair of the House Intelligence Committee, warned on Sunday that President Donald Trump is “pushing us down this road” toward impeachment amid allegations that the president pressed Ukraine’s president to investigate former vice president Joe Biden’s son.

The calls for impeachment have grown louder after reports earlier this week that an intelligence community whistleblower warned that Trump made an unspecified commitment to a foreign leader. Trump reportedly pressed Ukraine President Volodymyr Zelensky to investigate Biden’s son’s business dealings when Biden was vice president.

On Sunday, Trump admitted to reporters that he had discussed Biden with the Ukrainian president but insisted there was no “quid pro quo” between the two leaders. “I’m not looking to hurt Biden or even hold him to it,” Trump said. Trump has called the allegations a “witch hunt” and accused Biden, as vice president, of calling for the removal of Ukraine’s top prosecutor who had been investigating corruption by an oligarch connected to Biden’s son. On the campaign trail, Biden has called for a House investigation into whether Trump sought foreign assistance for his re-election bid.

During an interview on CNN’s “State of the Union”, Schiff told James Tapper that the reported allegations from the whistleblower complaint may finally force House Democrats to go down the road of impeachment.

“Why doesn’t the President just say, ‘Release the whistleblower complaint.’ Clearly he’s afraid for the public to see,” Schiff said. “This would be the most profound violation of the presidential oath of office, certainly during this presidency, which says a lot, but perhaps during any presidency. There is no privilege that covers corruption. There is no privilege to engage in underhanded discussions.”

“We may have crossed the rubicon here,” he added. “I have been very reluctant to go down the path of impeachment…but…that may be the only remedy that is co-equal to the evil that that conduct represents.”

Rep. Adam Schiff says that if the reports about Pres. Trump’s conversation with Ukraine are proven true, then impeachment may be the only "remedy." “This seems different in kind and we may very well have crossed the Rubicon here." #CNNSOTU pic.twitter.com/0dsWBXpC6g

A day earlier, Rep. Alexandria Ocasio-Cortez called for impeachment proceedings, tweeting that “the bigger national scandal isn’t the president’s lawbreaking behavior-it is the Democratic Party’s refusal to impeach him for it.” And just this week, Democratic presidential candidate Sen. Elizabeth Warren, one of the first 2020 candidates to call for impeachment, argued on Twitter that Congress was “complicit in Trump’s latest attempt to solicit foreign interference to aid him in U.S. elections.” Ocasio-Cortez turned the gaze toward Democrats.

At this point, the bigger national scandal isn’t the president’s lawbreaking behavior – it is the Democratic Party’s refusal to impeach him for it.