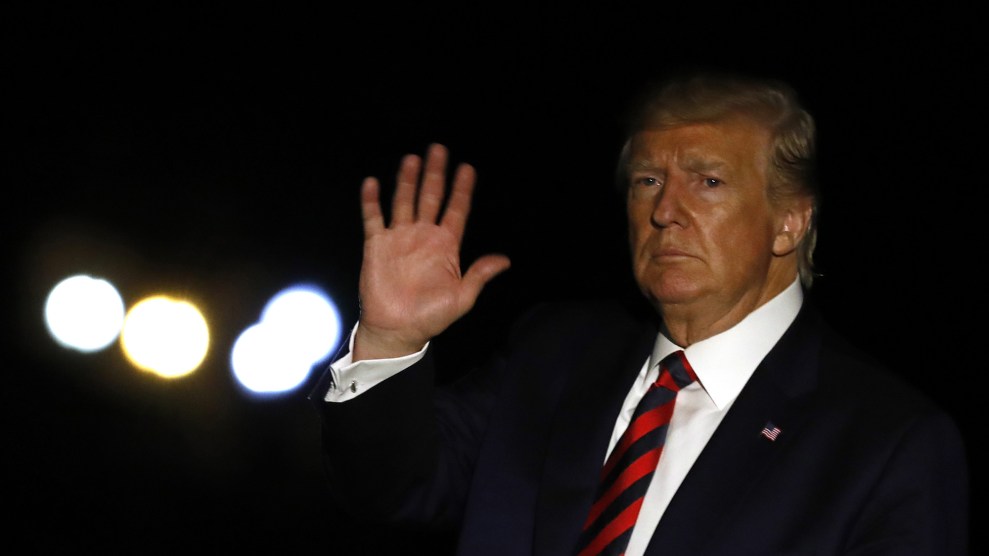 One of three major cases accusing President Donald Trump of violating the Constitution’s emoluments clause has been brought back from the dead. A panel of federal appellate judges ruled Friday that a group of restaurants in New York City can move forward with their claim that Trump is unfairly using his position as president to convince foreign governments to spend money at his own properties. The news comes amid a new flurry of questions about how Trump may be profiting from his presidency, with details emerging about the Air Force’s use of a Trump-owned Scottish resort to house service members and Vice President Mike Pence’s taxpayer-funded stay at Trump’s Irish resort—apparently at the suggestion of Trump himself.

When Trump took office, he refused to give up ownership or control of his business empire—which includes restaurants and hotels in New York City and Washington, D.C.—though he said he would no longer maintain day-to-day oversight. It’s an unprecedented situation: No other presidents, at least in recent history, have come to office with such an extensive business operation. Critics claimed that Trump was violating the emoluments clause—a section of the Constitution that prohibits the president from accepting payments from foreign governments—because foreign officials almost immediately began spending at the president’s hotels in New York and Washington.

In December 2017, in one of the first big court cases dealing with the issue, a federal judge in New York threw out a suit brought by the watchdog group Citizens for Responsibility and Ethics in Washington and a group of restauranteurs in New York. The judge ruled that the plaintiffs’ argument—that their businesses had suffered because foreign governments were instead patronizing Trump-owned establishments in hopes of currying favor with the president—was too speculative. But in a 2-1 decision Friday, the 2nd Circuit Court of Appeals overruled the trial judge, stating that the plaintiffs had a right to attempt to prove their argument. The court noted that numerous foreign officials have said in the press that they booked events at Trump properties to make a good impression.

Notably, the 2nd Circuit panel also took aim at a ruling made by a different appellate court. In that case, the 4th Circuit Court of Appeals threw out a separate emoluments cases, arguing that there was little the judicial branch could do to fix the problem. As long as the Trump name remained on his properties and foreign governments knew the president’s family would benefit, issuing an injunction against the president’s involvement wouldn’t help, the 4th Circuit judges reasoned. On Friday, the 2nd Circuit countered that even if the courts couldn’t completely solve the problem, they could still can take steps intended to eliminate any unfair advantage the president might have in encouraging foreign governments to patronize his businesses.

In addition to possibilities such as barring Trump businesses from offering services to foreign governments or requiring the president to set up a blind trust, the new ruling suggested another alternative: sunlight. “A court could require public disclosure of the President’s private business dealings with government officials through the Trump establishments, which may discourage Presidential action that appears to improperly reward such patronage,” the 2nd Circuit panel wrote.

The Department of Justice, which is representing the president in this case, may now ask the full 2nd Circuit to reconsider Friday’s ruling. The DOJ could also appeal to the Supreme Court.