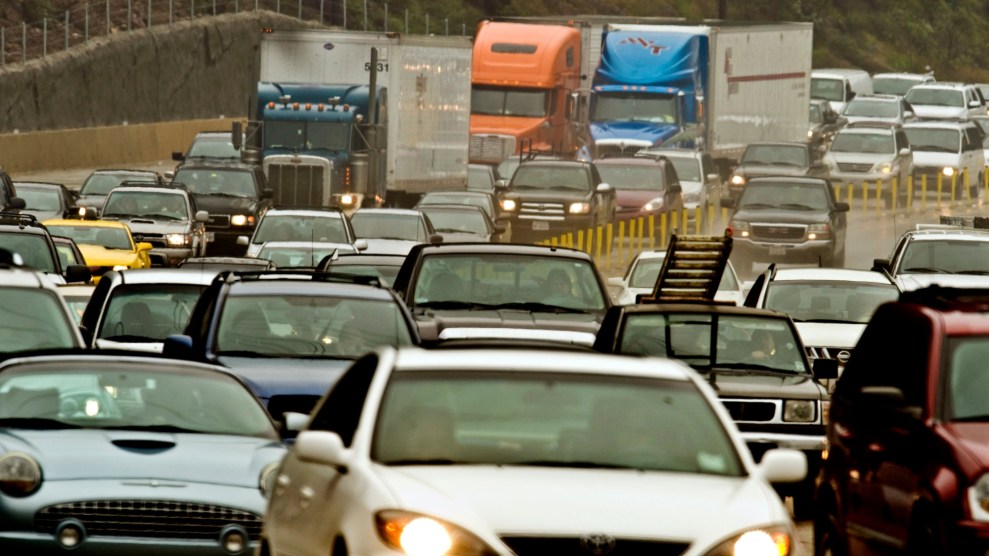 The Environmental Protection Agency announced on Thursday that it will revoke California’s waiver that allowed the state to enforce its own tailpipe greenhouse gas emission standards. On Friday, California and 23 other states filed a lawsuit against the Trump administration to challenge the move.

When the Trump administration announced it would roll back Obama-era fuel efficiency standards in 2018, 17 states—including California—sued the EPA. Then, this year in July, California brokered a deal with four automobile companies—Ford, Honda, Volkswagen, and BMW of North America—to make cars that would average nearly 50 miles per gallon by 2026, just one year later than the target the Obama administration set. That was quickly followed by an attack by the Trump administration. As I wrote Tuesday:

The move will come after the Justice Department opened an antitrust investigation into the four automakers that had bypassed the White House to reach a deal on emissions rules directly with California. After the Wall Street Journal uncovered details of the probe in September, House Judiciary Chairman Jerrold Nadler (D-N.Y.) and Representative David Cicilline (D-R.I.) said in a joint statement that it was “only the latest in a profoundly troubling pattern of abuse of power that has flourished under the Trump presidency.”

The goal of the recent revocation, according to the Trump administration, is to have only one rule for automakers to follow in the US.

“One national standard provides much-needed regulatory certainty for the automotive industry,” EPA Administrator Andrew Wheeler said in a statement Thursday. The move was immediately challenged by California, and the state followed up by announcing the lawsuit today. “Two courts have already upheld California’s emissions standards…Yet, the Administration insists on attacking the authority of California and other states to tackle air pollution and protect public health,” California’s attorney general Xavier Becerra said in a statement. But even though the administration promises more “certainty” for automakers through having one rule to follow, legal experts say the move actually leads to more uncertainty around fuel efficiency standards.

Even during the early years of the Clean Air Act, which was initially established in 1970— but had major revisions in 1977 and 1990—there have been two standards for vehicle emissions: the national standard and the California standard. The Clean Air Act was in fact designed to allow a state like California to apply for a waiver to adopt stricter standards than those proposed by the federal government. Once the EPA granted California the waiver to have stricter standards than the federal government, 13 states and the District of Columbia followed California’s lead. After all, states have different levels of pollution and thus, different needs when it comes to emission regulations.

At a time when the market is demanding more fuel efficient cars, the Trump administration’s action to revoke California’s authority to have its own standard while pursuing a more lax federal standard helps neither the environment nor the auto industry.

“One thing that we’ve been over the course of developments on this is automakers aren’t asking for this either,” says UCLA law professor Julia E. Stein. “They’re concerned about regulatory uncertainty.”

The legal battle is likely to be protracted, but if the EPA’s revocation succeeds, the 13 states that follow California’s standard would have a harder time meeting their air pollution reduction goals because they would no longer be able to adopt California’s rules. Instead they would be forced to comply with standards that are less rigorous. That’s why Stein says the Trump administration’s action is also “bad policy” for public health.

The main reason California implemented the stricter standards for vehicle emissions was because of its smog pollution problem. “Historically, under the Clean Air Act, smog pollution is exactly the kind of pollution that has been recognized as a compelling and extraordinary circumstance” to grant a waiver Stein says. “And there is no reason to think that’s changed because as the administration itself pointed out, California still struggles to get its air pollution under control.”

The EPA’s statement announcing the revocation of California’s waiver concludes: “The state must redouble its efforts to address the worst air quality in the United States…where for decades it has failed to address serious, severe, and extreme non-compliance status in several areas within the state.” If the Trump administration’s revocation succeeds in the court battles to come, California will have lost one important strategy for achieving that goal.