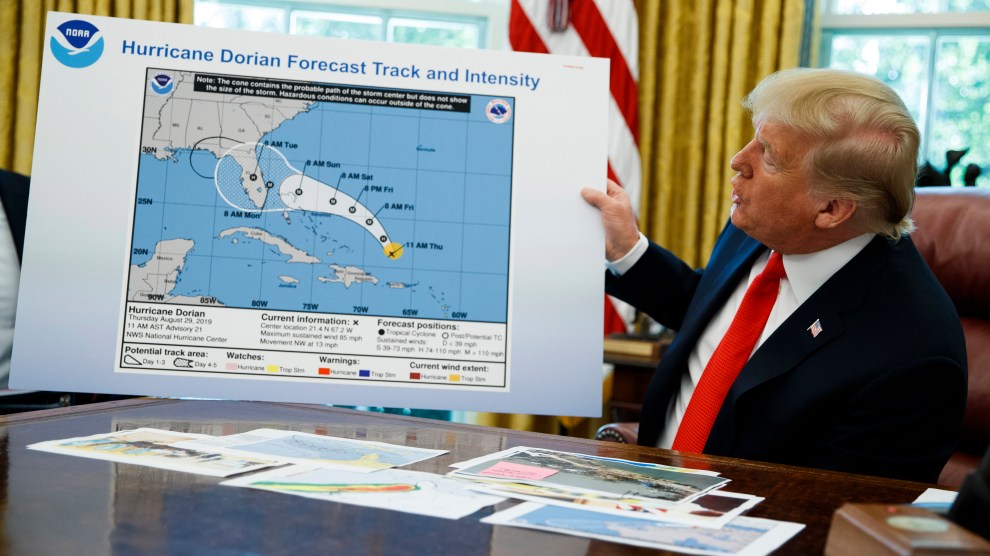 Who needs memory holes when you can alter the truth with a stroke of black Sharpie?

A White House video released Wednesday shows President Donald Trump holding up a chart of the trajectory of Hurricane Dorian. But there’s one problem: Added onto the National Hurricane Center’s “cone of uncertainty” forecast, outlined in white on the map, someone seems to have drawn in black marker an additional bulge covering Alabama.

Alabama was not in fact in the projected path of Hurricane Dorian.

The Sharpie art is likely a cover for the mistake Trump made Sunday when he falsely tweeted that the category 5 storm would hit Alabama, prompting the National Weather Service in Birmingham to tweet 20 minutes later that the state would not be affected.

The National Oceanic and Atmospheric Administration briefed Trump last week, on Aug. 29, with a map showing the hurricane’s trajectory extending into Florida. The White House video Wednesday uses the same map, but now with the alteration.

The Washington Post reports Wednesday that, “When asked whether the chart had been drawn on, Trump said: ‘I don’t know; I don’t know.'” The Post also notes the creating a false weather report is illegal and warrants a fine, up to 90 days of imprisonment, or both.

See the doctored poster in the video below: