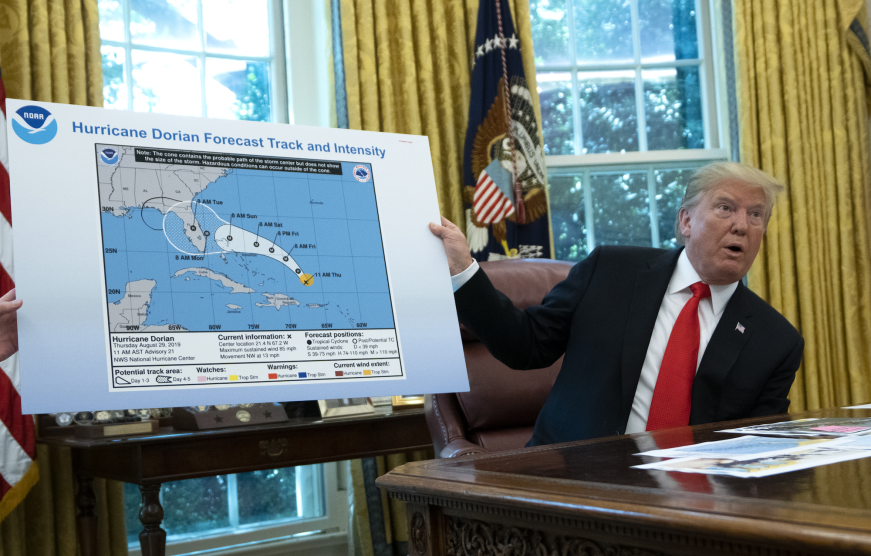 President Donald Trump on Thursday continued to insist that “certain models” had once projected Hurricane Dorian could impact Alabama, extending a now four-day obsession despite official contradictions from the state’s National Weather Service.

“What I said was accurate!” Trump complained on Twitter. “All Fake News in order to demean!”

….Instead it turned North and went up the coast, where it continues now. In the one model through Florida, the Great State of Alabama would have been hit or grazed. In the path it took, no. Read my FULL FEMA statement. What I said was accurate! All Fake News in order to demean!

The tweets come one day after Trump was exposed in a widely mocked video that showed him referring to a National Oceanic and Atmospheric Administration map that had been altered in order to back his original—and incorrect—warning that the state was included in Dorian’s path.

Shortly after Trump made the claim on Sunday, the National Weather Service of Birmingham, Alabama, pushed back: “Alabama will NOT see any impacts from #Dorian. “We repeat, no impacts from Hurricane #Dorian will be felt across Alabama.”

Rather than acknowledge the error, Trump has refused to let go.

“I don’t know, I don’t know,” Trump told reporters on Wednesday when asked if the map had been altered. White House spokesman Hogan Gidley later confirmed that indeed, a black Sharpie was used on the map, but he blasted the media for unfairly focusing on the detail.

The video has since prompted widespread ridicule, even disbelief over how the president remained fixated over an issue so trivial. Others have raised the possibility that Trump violated the law by knowingly promoting a false weather report.