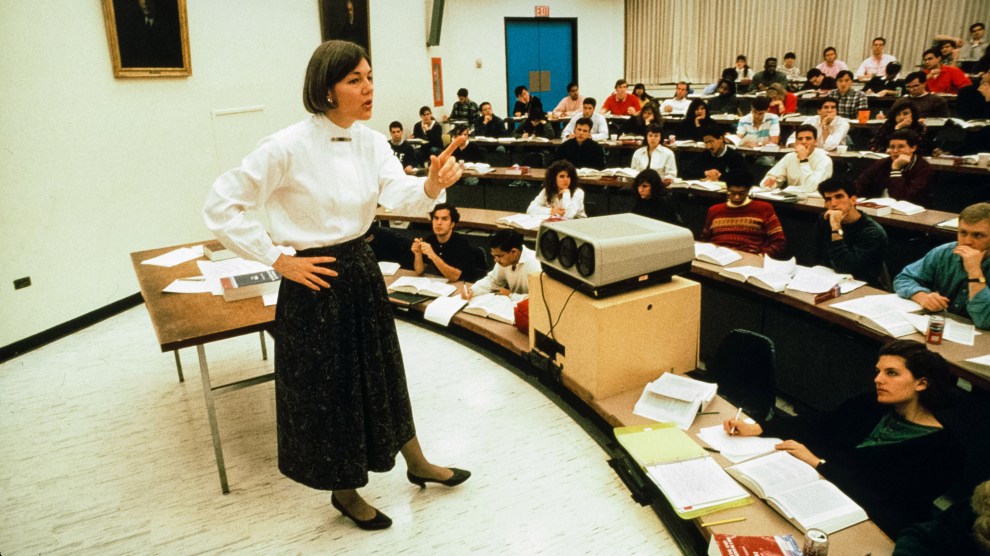 If you’ve paid any attention to Elizabeth Warren this campaign season, you’ve probably heard her say that when she was a 22-year-old special education teacher in 1971, she lost her job because she was “visibly pregnant.”

In recent days, journalists—on both the left and right—have attempted to cast doubt on that story. The evidence they’ve assembled isn’t particularly compelling, and Warren has responded by saying that her statements are completely true. In a pair of tweets Tuesday, she asked readers to share their own stories of pregnancy discrimination.

This was 1971, years before Congress outlawed pregnancy discrimination—but we know it still happens in subtle and not-so-subtle ways. We can fight back by telling our stories. I tell mine on the campaign trail, and I hope to hear yours.

Warren’s tweets came a day after the conservative Washington Free Beacon published school board meeting minutes from Riverdale, New Jersey, where Warren was employed as an elementary school speech pathologist during the 1970-71 school year. The minutes state that board members unanimously voted to extend Warren’s teaching contract during an April meeting and that she resigned two months later in June.

Conservative publications from Fox News to the Washington Examiner to the New York Post picked up the story. So, too, did supporters of Bernie Sanders, Warren’s chief rival for progressive support in the Democratic primary.

All of you ex Berners who switched to Warren, the establishment is playing you. They want progressives to lose. Accept this fact: Elizabeth Warren has a real problem with the truth about her bio. Some of it vile stuff. Don't make this mistake. Go with the progressive who will win https://t.co/YeqvkcO5K9

Making the procedural critique that Elizabeth Warren is a plagiarist and pathological liar won't work. Her appeal is libidinal. She is the Democrat's Trump. They're equally shameless but he's funnier & will brutalise her dumbass on campaign trail.
Only way to beat him is Bernie!

Just got my new DNA test results back.

CBS News, however, found evidence supporting Warren’s claims. Two retired Riverdale teachers said, according to the network, that “the workplace culture at the time may have left Warren with no option but to move on when her pregnancy became apparent.”

The article notes that the Pregnancy Discrimination Act, which would protect a non-tenured teacher like Warren, was not passed until 1978, seven years after Warren’s teaching job ended.

Women (and historians) on Twitter pointed out that workplace discrimination is rarely explicitly documented in school board minutes, and that pregnancy discrimination was extremely common in the 1970s.

If you have trouble believing that Elizabeth Warren experienced pregnancy discrimination because no one wrote down "Fired because pregnant," you are going to be floored when you learn about the experiences of…. any other human woman you know.

1. I may know a bit about the history of teaching. It was EXTREMELY COMMON to push pregnant teachers out of their jobs, right through the 1970s. These rules were often unspoken and enforced without a paper trail. Economists call it a "pregnancy bar." https://t.co/DmqyVeehg0

if you don't understand what this furor over the Elizabeth Warren pregnancy firing story is about, ask pretty much any woman in your life over 35.

9 years ago, my pregnant friend got a job offer.

When accepting, she gave a heads-up about planning for coverage during maternity leave.

The response? "We're sorry you won't be able to take the position, we've offered it to another candidate."

The notion that Elizabeth Warren should "prove" that she lost her teaching job ~1970 when she got pregnant is intellectually feeble in the extreme. It was the norm, not the exception. Take a quick walk down memory lane, courtesy of local newspapers in the early 70s. (see thread) https://t.co/m5550p2AIC