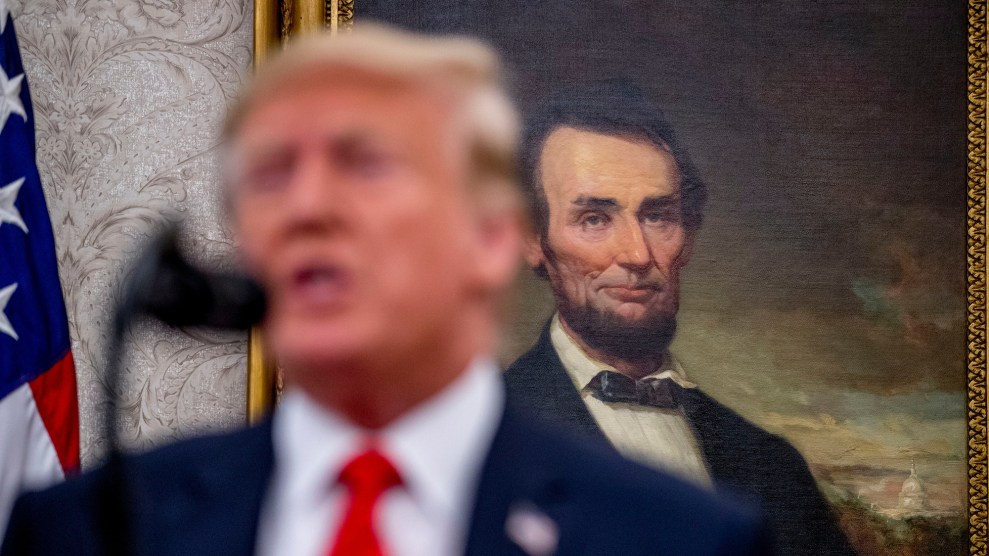 Trump gives a speech in front of a portrait of Abraham Lincoln.Andrew Harnik/AP

In yet another presidential first, this week Donald Trump warned of an impending civil war in the United States—via Twitter, of course. On Sunday night, Trump paraphrased Robert Jeffress, a baptist-preacher-turned-Fox-News-pundit, tweeting: “If the Democrats are successful in removing the President from office (which they will never be), it will cause a Civil War like fracture in this Nation from which our Country will never heal.”

….If the Democrats are successful in removing the President from office (which they will never be), it will cause a Civil War like fracture in this Nation from which our Country will never heal.” Pastor Robert Jeffress, @FoxNews

The online reactions to the tweet were far ranging. #CivilWar2 started trending. A Harvard Law professor claimed the tweet itself was grounds for impeachment. A Republican representative disavowed the tweet as “beyond repugnant.”

Meanwhile, a right-wing militia group called the Oath Keepers weighed in to agree with Trump.

Here’s the money quote from that thread. This is the truth. This is where we are. We ARE on the verge of a HOT civil war. Like in 1859. That’s where we are. And the Right has ZERO trust or respect for anything the left is doing. We see THEM as illegitimate too.@StewartRhodesOK https://t.co/DjB8TY0vCo

The Oath Keepers describe themselves as an anti-government “patriot” group whose members pledge to uphold the constitution if a tyrannical president declares martial law. The group believes that day is imminent, and is constantly looking for evidence of a Deep state conspiracy to back their ideology. As Mother Jones reported back in 2010, the group consists largely of soldiers, police, and veterans, like Lee Pray, who runs training drills with fellow Oath Keepers to prepare for when that day inevitably comes:

Pray (who asked me to use his middle name rather than his first) and five fellow soldiers based at Fort Drum take this directive very seriously. In the belief that the government is already turning on its citizens, they are recruiting military buddies, stashing weapons, running drills, and outlining a plan of action. For years, they say, police and military have trained side by side in local anti-terrorism exercises around the nation. In September 2008, the Army began training the 3rd Infantry’s 1st Brigade Combat Team to provide humanitarian aid following a domestic disaster or terror attack—and to help with crowd control and civil unrest if need be. (The ACLU has expressed concern about this deployment.) And some of Pray’s comrades were guinea pigs for military-grade sonic weapons, only to see them used by Pittsburgh police against protesters last fall…

In Pray’s estimate, it might not be long (months, perhaps a year) before President Obama finds some pretext—a pandemic, a natural disaster, a terror attack—to impose martial law, ban interstate travel, and begin detaining citizens en masse. One of his fellow Oath Keepers, a former infantryman, advised me to prepare a “bug out” bag with 39 items including gas masks, ammo, and water purification tablets, so that I’d be ready to go “when the shit hits the fan.”

With Trump in the Oval Office, the group’s longstanding antagonism toward the presidency appears to have waned; they’ve pivoted to viewing the president not as the perpetrator of Deep state collusion, but the victim.

And I believe they will be right. Trump’s real crime” was winning the election. Period. All the rest is smoke and mirrors to justify reversing that election. And some in the GOP are in on it.@StewartRhodesOK https://t.co/wMTASqbn1j