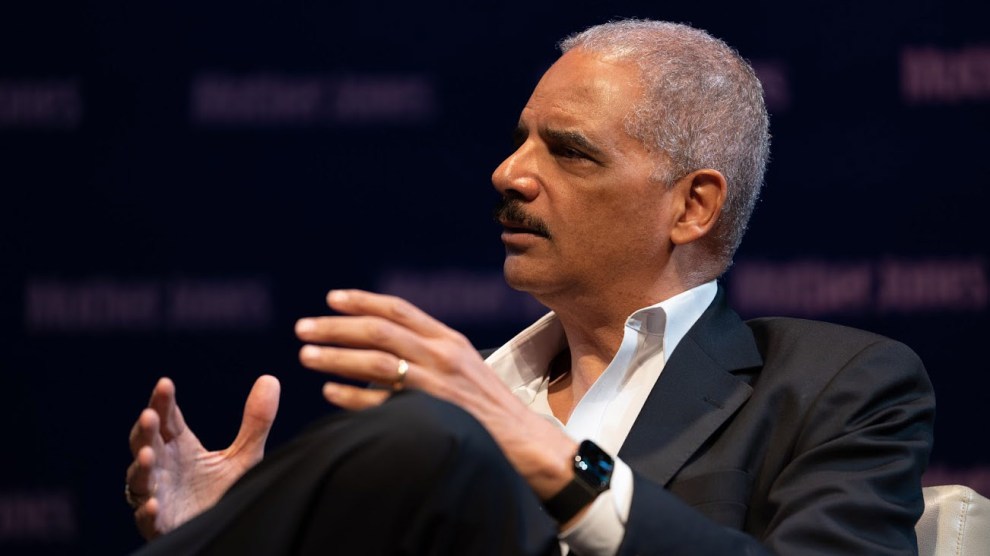 “You think about thousands of people who were lynched in this nation. To compare that to a constitutionally mandated, or constitutionally authorized, process that’s underway in our Congress was reprehensible,” said Holder, who became the first African American attorney general when he was appointed by Barack Obama. “That’s reflective of who this man is and why he’s got to get his ass beaten in 2020.”

“I thought that was reprehensible. That’s reflective of who this man is and why he’s got to get his ass beaten in 2020.”pic.twitter.com/LX9Uv4lbEO

During an exclusive interview with Mother Jones voting rights reporter Ari Berman, Holder expressed his disappointment with the conduct of the current administration. When asked whether impeaching Trump is warranted, Holder quipped, “You gonna ask me a hard question?” before adding that any novice prosecutor would have indicted Trump for obstruction of justice based on the Mueller report alone.

"Is there a basis for impeachment? I think there's no question about that." —@EricHolder tells our voting rights senior reporter @AriBerman pic.twitter.com/pOPOXbn2Le

And, while acknowledging the tricky optics of criticizing one’s successor, Holder concluded that acting Attorney General William Barr—who is now managing a criminal inquiry into the Justice Department’s own Russia investigation—was “unfit for the job.” Holder said that Barr thinks of himself as Trump’s lawyer rather than the lawyer for the people of the United States, and that he holds him in even lower esteem than Trump’s previous attorney general, Jeff Sessions.

“This is an administration unlike any other,” he said. “I have been in this town since 1976, served under Republican as well as Democratic presidents in various jobs that I’ve had in the Justice Department, and I’ve never, ever seen anything like we are in the process of experiencing.”