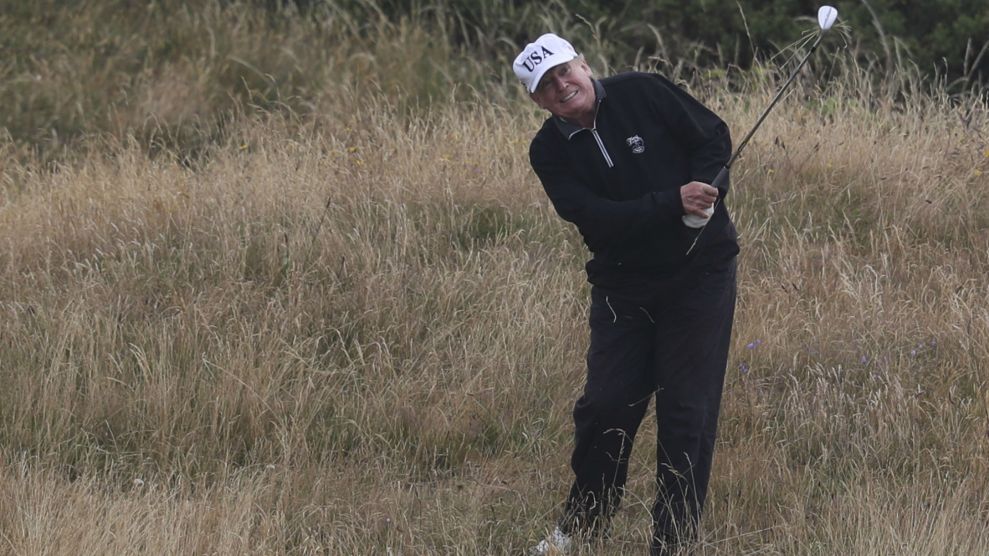 President Donald Trump’s flagship Scottish golf course has posted another year of losses, according to new filings made by the Trump Organization in the United Kingdom. Turnberry, located near Glasgow on the Firth of Clyde, has consistently bled money since Trump purchased the club for $60 million in 2014. Last year, per the filing, the course lost $13.1 million.

The bad news follows a recent decision by local planning authorities to deny a proposed expansion of the resort that would have allowed the Trump Organization to build luxury housing on a swath of  scenic property on the Scottish coastline. The development was believed to be the long-term plan for the resort’s financial viability, and the move to block it calls into question whether Turnberry will ever climb out of the red.

Trump’s other Scottish golf course, Trump International Golf Links in Aberdeenshire, last week reported $1.3 million in losses. That property has also yet to turn a profit since Trump opened it in 2012, though planning authorities did greenlight a plan by Trump to build homes and villas along that golf course. (That plan, however, specified it might take more than 10 years to actually start work on the project.)

The losses at Turnberry come as House Democrats investigate recent revelations that US Air Force flight crews stayed at President Trump’s luxury resort when they made refueling and rest stops at a nearby airport. The Pentagon reported that it spent at least $184,000 at Turnberry over the past two years.

The good news for the resort is that its revenues did increase last year, bringing in about $23.4 million in business, up from $18 million in 2017. But costs also rose, pushing the resort into the red. The club’s 2018 losses were almost three times higher than those in 2017, when the resort lost nearly $4.5 million. Since Trump purchased Turnberry, the club has lost about $58 million.

In Turnberry’s 2018 financial filing, Eric Trump, ostensibly head of the Trump Organization’s golf operations, tried to put a rosy spin on the latest numbers. He said in 2018 the club earned its highest revenues in its century-plus history. A letter from an auditor included in the filing concluded Turnberry “is dependent on continuing finance being made available by its ultimate owner to enable it to continue operating and to meet its liabilities as they fall due.” In other words, for Turnberry to keep its lights on, Donald Trump will have to continue loaning the resort money. To date, he has loaned more than $146 million to the club. The auditor noted that the Trump Organization has “confirmed that it will ensure all necessary financial support is provided to the group for the foreseeable future.”

Perhaps the biggest blow to the resort’s financial future is the denial of a request to rezone a large tract of farmland along the scenic Firth of Clyde coastline, directly adjoining the resort, to build as many as 87 new houses and a number of luxury villas. At many Trump-branded properties around the world, the development and sale of real estate has been far more profitable than the the resorts themselves.

The Trump Organization did not respond to a request for comment on the latest filing or its path to profitability at Turnberry.