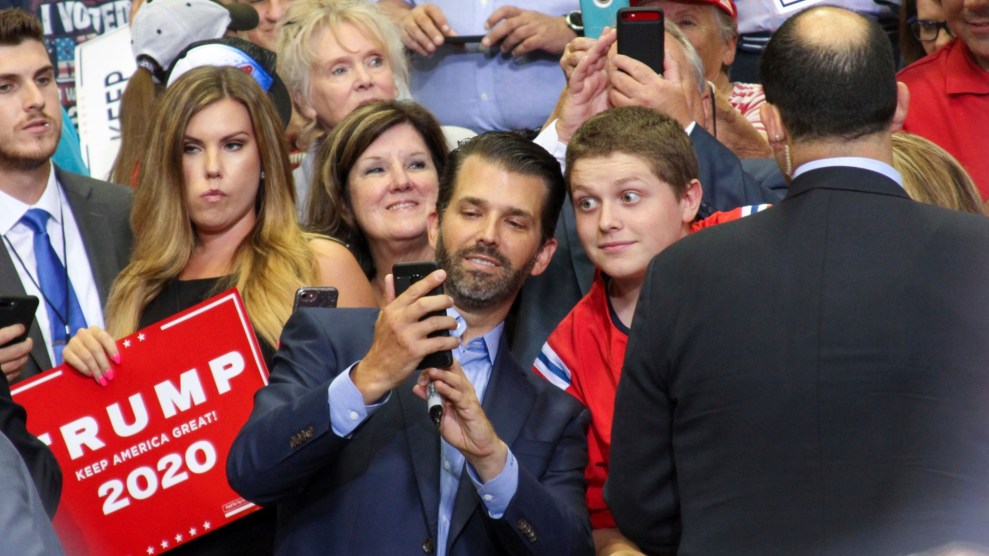 Last year, a group of far-right fringe agitators and conspiracy theorists set out to create a pro-Trump political conference in DC for people just like them. Headliners for the American Priority Conference included Trump whisperer Roger Stone, before he was indicted for lying to Congress, and short-lived Trump White House communications director Anthony Scaramucci. But the event at the Washington Marriott Wardman Park proved to be an embarrassing flop, with attendance so dismal that one scheduled speaker fled rather than address such a small audience. Undeterred, organizers this year have taken a new approach by moving the event from DC to the Trump National Doral Miami Golf Club in Florida.

Relocating to a property owned by the president seems to have transformed the conference, which starts Thursday, into a bona fide political confab. It has attracted some more prominent speakers this year, notably the president’s son Donald Trump Jr., who will stand for selfies with anyone who pays the VIP rate of $2,500 to attend. But American Priority also seems to have nabbed the support of the sort of a big corporate patron that was missing from its 2018 fringe-fest. GEO Group, a Florida-based private prison company that has received nearly half a billion dollars in federal contracts to detain immigrants since President Trump took office, is now listed as one of its most prominent sponsors.

Holding functions at a Trump-owned property has become de rigueur for interest groups, from payday lenders to the Saudis, looking to influence the administration, and GEO Group is no exception. The country’s largest private prison company relies heavily on federal largesse. More than 40 percent of its revenue comes from federal contracts, and it has taken a number of steps to ingratiate itself with the Trump administration. During the presidential campaign, a GEO Group subsidiary donated $225,000 to a pro-Trump super-PAC. After Trump was elected, the company donated $250,000 to Trump’s inaugural committee and moved its annual meeting to Doral. And now, it’s helping a pro-Trump group spend some money there.

A press release for the American Priority Conference touted the new location of the event with as many superlatives as it did for any of the major headliners. “Doral Resort offers an experience like no other with unbeatable savings and luxurious accommodations on a prestigious 800-acre resort in tropical Miami,” it read. “The $250 million renovation boasts a completely re-designed clubhouse, 643 new deluxe accommodations, fresh restaurant concepts, enhanced championship golf courses, re-imagined Trump Spa and an array of retail shops and recreational amenities, including the Royal Palm Pool oasis.”

The Doral is the single largest source of revenue for the Trump Organization, the president’s company that is currently run by his children. But the golf club’s operating revenue has fallen sharply since Trump first entered the presidential race, declining by 18 percent between 2015 and 2017, according to the Washington Post. Trump has been accused of using his office to shore up the resort’s flagging fortunes. During a joint press conference with French President Emmanuel Macron at the G7 meeting of world leaders in France in August, Trump publicly suggested that when the US hosts the meeting next year, the event might be at the Doral.

“It’s got tremendous acreage, many hundreds of acres, so we can handle whatever happens,” Trump said, calling the Doral a “great place” and touting its proximity to the airport. “We have a series of magnificent buildings, we call them bungalows, they each hold from 50 to 70 rooms, they have magnificent views.”

Critics responded to Trump’s suggestion that the world leaders meet at his own resort, where he would personally profit from their visits, by using social media to highlight a lawsuit against the Doral over bedbugs that was settled in 2016. The #TrumpBedBugs campaign infuriated the president, who tweeted “Radical Left Democrats” were to blame for spreading nasty rumors about one of his prized properties.

As the attraction of his properties diminishes with the president’s popularity, Trump needs companies like GEO Group to keep his resorts profitable.

As the attraction of his properties diminishes with the president’s popularity, Trump needs companies like GEO Group to keep his resorts profitable. Meanwhile, GEO Group needs him. In 2016, President Barack Obama had ordered the Department of Justice to stop using private prisons, a decision that sent GEO Group’s stock plummeting 35 percent. But Trump quickly rolled back that policy, and since he took office, the prison giant has secured about $480 million in new contracts with ICE for immigrant detention, making ICE the company’s single largest source of income. In 2018, nearly 30 percent of its $2.33 billion in revenue flowed from ICE contracts.

But the company has become ever more reliant on the Trump administration’s generosity. Many major national banks have divested from private prisons because of criticism over their profiting from human rights abuses and the incarceration of immigrant children and families. Big banks are now refusing to extend loans to the company to finance its growth. GEO Group’s stock price has fallen about 30 percent since June, when JP Morgan Chase became the latest bank to announce it was abandoning the company.

Sponsoring the American Priority Conference at the Doral may win GEO Group favor with Trump, but it’s hardly an ideal model of corporate image burnishing. Despite the relatively mainstream headliner additions of Don Jr., former Trump press secretary Sarah Huckabee Sanders, and Rep. Matt Gaetz (R-Fla.), the vast majority of people on the schedule for the three-day event hail from the right’s furthest fringes.

The event will feature a climate change denier as well as promoters of QAnon, an internet conspiracy that claims Trump is fighting the deep state to stop liberal elites they believe are running a secret pedophile ring. Tracy Beanz, who organized 100-plus QAnon believers to march on Washington last year, will be on a panel called “Unmasking the Russian Hoax,” along with George Papadopoulos. He’s the former Trump campaign foreign policy adviser who pleaded guilty in 2017 to lying to the FBI about the campaign’s contacts with Russia.

Conferencegoers will hear from the internet troll Jack Posobiec, who helped promote an earlier conspiracy theory that suggested Hillary Clinton and her henchmen were running a pedophile ring out of the basement of a DC pizza parlor. The idea inspired an armed North Carolina man to show up at Comet Ping Pong and fire shots as he searched for the nonexistent basement holding cell. The event will also feature a speech from “free speech maven” Jason Fyk, who sued Facebook after the social media giant killed his business by shutting down pages he’d created that were dedicated solely to videos and photos of people peeing. (He lost.)

Along with a golf tournament and pool parties, the conference schedule is packed with random people who’ve become minor internet celebs for owning the libs, like Scott Presler, a member of Gays for Trump who organized a trash cleanup day in Baltimore after Trump criticized the city as “a disgusting rat and rodent-infested mess.” Trump’s military high school platoon sergeant, now a Florida lawyer, is on the schedule to talk about taxes along with Trump superfan, radio host and QAnon promoter Bill Mitchell. Sadly, raw food advocate David “Avocado” Wolfe will no longer be leading the QAnon crowd through downward dog poses at daily yoga classes. Touted early on in the conference promo materials, Wolfe was perhaps even too fringy for the American Priority Conference. As The Outline explains, “Wolfe has stated that mushrooms arrived on our planet via the cosmic wind. He tells his followers vaccines are a conspiracy, and believes that chemtrails are real.” He’s no longer on the schedule.

All in all, it’s not the sort of event that corporate America tends to get behind—and it hasn’t. Most of the other sponsors are conservative political groups such as American Majority or small outfits like Republican Legion, which sells MAGA hats online. GEO Group did not respond to a request for comment. The American Priority Conference is organized by a low-profile Virginia conservative activist and telecom exec named Alex Phillips, who also did not respond to requests for comment; nor did the conference’s PR team.

At least one private prison opponent thinks GEO Group has nothing to fear from its sponsorship of the fringe conference. “This is a company that incarcerates people for the purpose of generating corporate profits,” says Alex Friedmann, associate director of the Human Rights Defense Center, a nonprofit advocacy group located near GEO Group headquarters in Florida. “They run facilities where people have been murdered. They house children in prison-like facilities. At this conference, all the other nutjobs should be embarrassed and ashamed to be associated with GEO Group, not the other way around.”