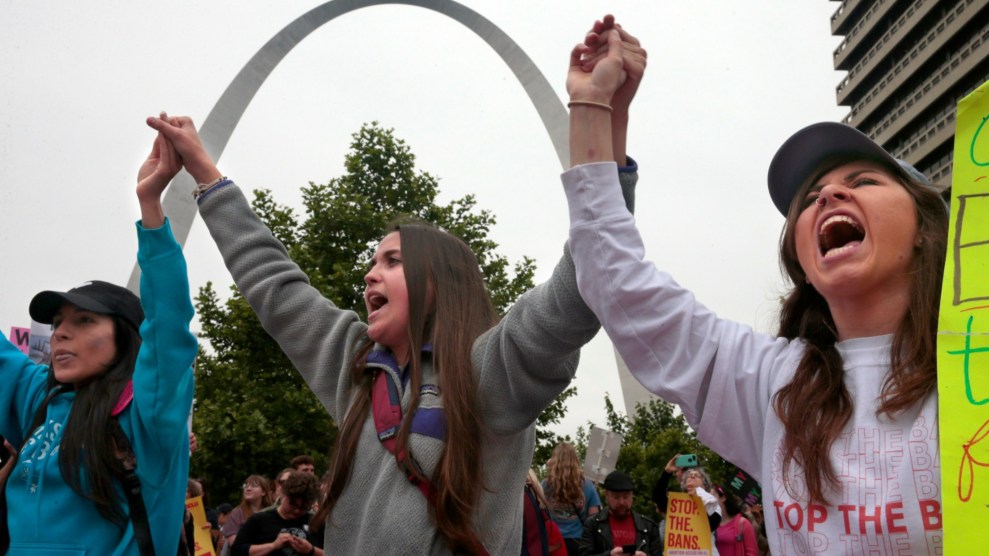 Protesters rally in St. Louis for abortion rights and in opposition to the ban recently passed by the Missouri legislature in May.Robert Cohen/St. Louis Post-Dispatch via AP

Missouri’s top health official admitted that the state government has been tracking the menstrual cycles of Planned Parenthood patients as it weighs the fate of the state’s last remaining abortion clinic.

Randall Williams, the Missouri state health director, said Tuesday that the state health department had been keeping a spreadsheet of patients who had visited Planned Parenthood, with personal data on each patient including the date of the last menstrual period. The state collected this information as a part of its annual inspection of the clinic and later used this information to try to determine whether patients had undergone failed abortions. According to the Kansas City Star, which first reported the news, the spreadsheet also included “medical identification numbers, dates of medical procedures and the gestational ages of fetuses.”

“Today’s revelation is deeply disturbing,” Yamelsie Rodriguez, president and CEO of Planned Parenthood of the St. Louis Region , said in a statement. She added, “Missouri politicians have gone too far. This is government overreach at its worst. It shadows the Trump administration’s history of tracking the periods of refugee girls under the government’s care. This is outrageous and disgusting.”

Williams’ testimony came during an administrative commission hearing taking place this week to determine whether Missouri’s last abortion clinic, a Planned Parenthood facility in St. Louis, will be allowed to keep its license to perform abortions. The hearing began on Monday morning and is set to end on Friday afternoon.

This hearing is the just the latest chapter in a fight between the Missouri Department of Health and the Planned Parenthood of the St. Louis Region. In May, state regulators demanded to question clinic doctors over “ongoing concerns about deficient practices,” but the clinic declined to make providers available for interviews that it considered a form of intimidation. As a result, the health department refused to renew the clinic’s license to perform abortions, leading Planned Parenthood to sue the state.

If the St. Louis Planned Parenthood fails to get its license renewed, Missouri will become the first state without any abortion clinics since the Supreme Court’s 1973 Roe v. Wade ruling upholding the right to an abortion.

“This is the reality when people in power want to strip away our rights and freedoms,” Alexis McGill Johnson, the acting president of the national Planned Parenthood organization, said in a statement. They force medically unnecessary pelvic exams, investigate menstrual cycles, and do whatever it takes to take control of our bodies, our lives, and our futures. Enough is enough. Every person deserves access to safe, legal abortion without fearing their personal information will be used to wage political war.”