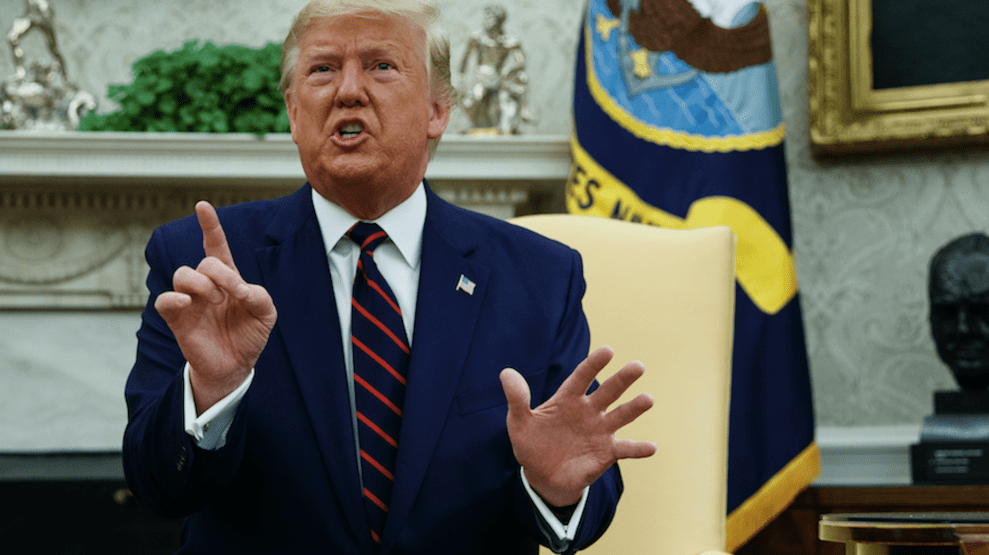 Let our journalists help you make sense of the noise: Subscribe to the Mother Jones Daily newsletter and get a recap of news that matters.
House Speaker Nancy Pelosi (D-Calif.) announced late Tuesday that Rep. Adam Schiff (D-Calif.), the chair of the House Intelligence Committee, would be making a special appearance at her weekly press briefing, setting off a wave of intrigue among avid impeachment-watchers.
“Please be an impeachment inquiry into Pence, Barr, and Pompeo, or any combination of the above,” Louise Mensch, the former British MP prone to conspiracy theories, prayed. “Gonna be a busy, busy, busy, busy day,” a CNN reporter predicted. “Checks watch. Sets alarm.”
Alas, the press conference Wednesday morning turned out to be rather underwhelming. “Does anybody in this room care about the cost of prescription drugs?” Pelosi asked reporters, knowing full well that the answer was in fact, nah.
But President Donald Trump appears to have witnessed something entirely different. Rather than find relief in the nothing-burger briefing, the exceedingly thin-skinned president logged onto Twitter to fire off a series of furious tweets.

Nancy Pelosi just said that she is interested in lowering prescription drug prices & working on the desperately needed USMCA. She is incapable of working on either. It is just camouflage for trying to win an election through impeachment. The Do Nothing Democrats are stuck in mud!

Adam Schiff should only be so lucky to have the brains, honor and strength of Secretary of State Mike Pompeo. For a lowlife like Schiff, who completely fabricated my words and read them to Congress as though they were said by me, to demean a First in Class at West Point, is SAD!

Trump then ranted before reporters in the Oval Office, spewing a stream of false attacks against his political enemies.

.@realDonaldTrump responds to reporters question about Ukraine during a meeting in the Oval Office. pic.twitter.com/NcVKjcFkmZ

Failing to achieve catharsis with the Oval Office tantrum, Trump continued to lash out at a joint press conference. It was spectacular:

TRUMP: “There are those who think I am a very stable genius, ok?” pic.twitter.com/oUw8lTvYqx

NEW: A Finnish reporter asks the president of Finland, “What kind of favors has Mr. Trump asked from you?”

Trump responds, “Or the other way around, you mean…” pic.twitter.com/I8bD7gCG3Q

The reaction could be considered a small, but meaningful victory for Democrats. By simply goading the president into a predictable meltdown over nothing, the case for his unfitness for office grew even stronger.