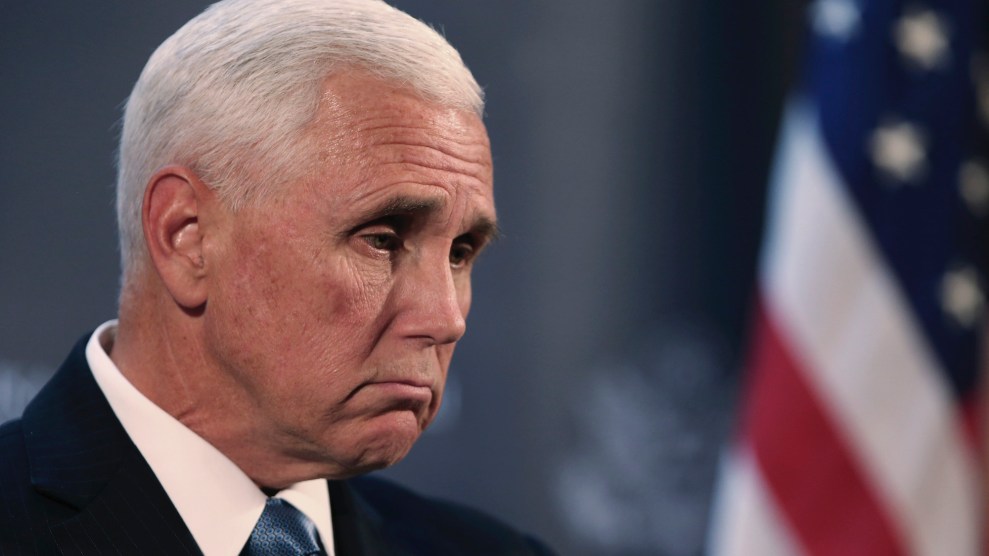 This morning, Vice President Mike Pence refused to answer whether he knew about President Donald Trump’s efforts to withhold military aid to Ukraine unless President Volodymyr Zelensky authorized an investigation into former Vice President Joe Biden and his son Hunter, a quid pro quo that has been corroborated by several top diplomats in their testimonies in the House impeachment inquiry.

During his appearance on Face the Nation, CBS News’ Margaret Brennan pressed Pence four times whether he had “knowledge of the deal that these US officials have described under oath.” The vice president avoided directly answering the question, instead pointing to his own interactions with Zelensky, in which said he “focused entirely on President Zelensky’s agenda to bring about reforms to end corruption in Ukraine and to bring together the European community to provide greater support for Ukraine.”

“I can only tell you what I know,” Pence said. “And what I know is that the transcript of the president’s call with President Zelensky shows that there was no quid pro quo. He did nothing wrong.”

UKRAINE CONTROVERSY: “I can only tell you what I know…what I know is the transcript shows there was no quid pro quo in all of my interactions with President Zelensky," @VP tells @margbrennan of @realdonaldtrump 's controversial call with Ukraine's president. pic.twitter.com/dOfhdUCakE

“As the facts continue to come out the American people again will see there in the President’s transcript, my interactions, there was no quid pro quo,” Pence said when asked asked a third time. “There was no pressure. It was entirely focused on issues.”

“I haven’t gotten a clear answer from you on that though, sir,” Brennan replied. “Are you saying that you did not ever hear of such a deal? Is that what I understand you’re describing?”

“I’m telling you that all of my interactions with the president, all of my conversations with President Zelensky, were entirely focused on issues of importance to the American people, ending corruption, enlisting more European support and supporting Ukraine in a way that would restore its territorial integrity and stand by Ukraine for its sovereignty,” Pence concluded.

It was an encore of a similar exchange the vice president had during a press event in Iowa earlier this month. There, NBC News reporter Vaughn Hillyard asked Pence whether he had direct knowledge that the president had held up military aid to Ukraine in exchange for investigating the Bidens. Pence also ducked answering questions on that occasion.