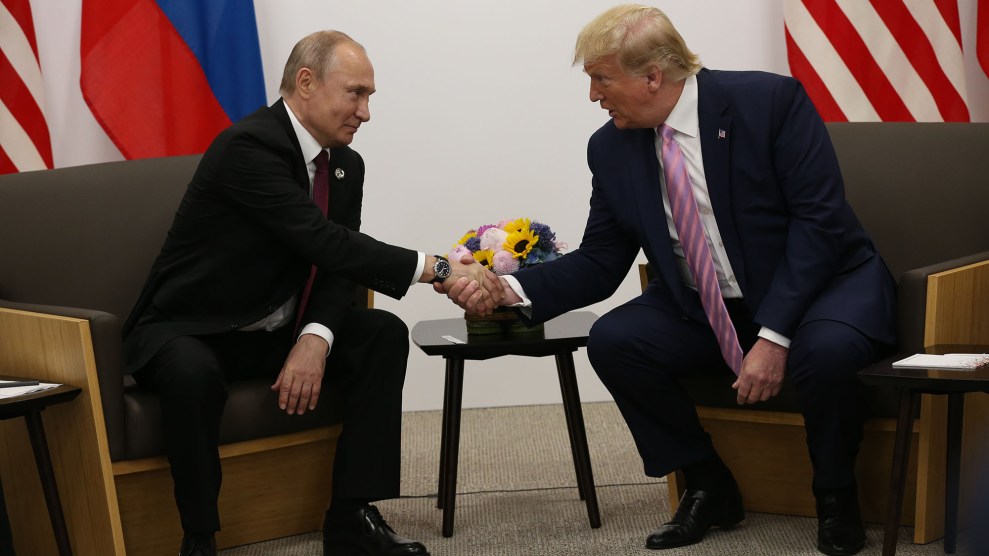 The Republican-controlled Senate Intelligence Committee has found that the Kremlin directed a social media campaign in advance of the 2016 elections that “overtly and almost invariably” aimed to help Donald Trump—and that it is still at it.

In a report released Tuesday, the committee endorsed an Intelligence Community assessment issued in the last days of the Obama administration that Russian interference was intended to benefit Trump, a conclusion the president has never accepted.

The conclusion marks a subtle shift by GOP senators on the committee. In 2017 and since, many have argued Russia aimed primarily to create division in the United States, not to help Trump. In November 2018, committee chair Richard Burr (R-N.C.) downplayed the evidence of assistance to Trump, complaining that people “have tried to reduce this entire conversation down to one premise: foreign actors conducted a surgically executed covert operation to help elect a United States president,” adding that “this story does not simplify that easily.” Tuesday’s report still says the IRA’s broader goal of interfering in the 2016 election was to “sow discord in American politics and society.” But the Senate report dispenses with the argument that effort did not also entail support for Trump, detailing the role of the Internet Research Agency, a Kremlin backed troll farm, in a campaign designed to benefit his campaign.

Most IRA content did not overtly back one candidate or another, according to the report, but was instead used for “establishing the credibility of their online personas.” Operatives created content that painted the picture of a southern conservative or a liberal activist “until the opportune moment arrived,” the report says. The profiles then used their credibility with like-minded voters to deliver a message designed “to influence the targeted user.” For instance, IRA operatives created an “Army of Jesus” Facebook page, which eventually gained 216,000 followers. After pumping out apolitical religious content, the page on November 1, 2016, declared: “HILLARY APPROVES REMOVAL OF GOD FROM THE PLEDGE OF ALLEGIANCE.”

The report also notes that Russian efforts to use social media to manipulate American politics likely haven’t stopped. The committee cites a 2018 federal indictment charging a IRA employee of attempting to interfere with the 2018 midterm elections. Another section of the report warns that future Russian disinformation efforts may be focused on “gathering data points”—such as phone numbers, email addresses, or banking details—that could help target interference efforts aimed at the 2020 presidential election, according to research the committee cited by Graphika, a private firm.

The report urged President Trump to establish an interagency task force to “monitor and asses foreign country’s use of social media platforms for democratic interference.” Other recommendations include federally funded media literacy programs to “build long-term resilience to foreign manipulation,” and more disclosure from intelligence officials about potential political interference. It also recommends the administration “reinforce with the public the danger of attempted foreign interference in the 2020 election.”

“Between now and the 2020 election, the Intelligence Community must find ways to keep the U.S. public informed not only of individual influence operations but the Community’s assessment of the goals and intent of Russia and other foreign adversaries,” the report concluded.

Perhaps the most memorable portion of the report is a section quoting a message written by an IRA employee obtained by the committee, where they describe the scene in his office on Election Day: “On November 9, 2016, a sleepless night was ahead of us. And when around 8 a.m. the most important result of our work arrived, we uncorked a tiny bottle of champagne.. took one gulp each and looked into each other’s eyes….We uttered almost in unison: ”We made America great.'”