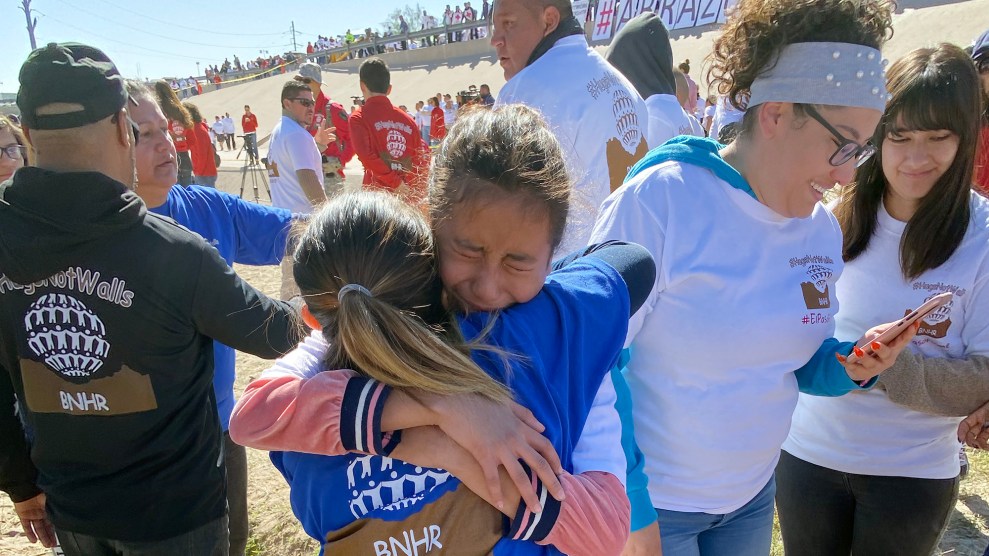 Last week, Miriam Pallares boarded a bus in Oklahoma City with her six-year-old daughter and rode through the night to El Paso, Texas for a three-minute hug with family she hadn’t seen in years.

The mother and daughter were among 2,500 people participating in a rare event in which US Customs and Border Protection opens a gate in the fence separating El Paso from Ciudad Juárez, Mexico, allowing families to briefly reunify. Hugs Not Walls, or Abrazos No Muros, was started in the spring of 2016 by non-profit Border Network for Human Rights. It takes place roughly twice a year, when the water flow of the Rio Grande is cut to a trickle. Families on either side of the border wait in line for hours to embrace for three minutes in the dry riverbed.

For many, the event marks the first—and last—time they will have physical contact with family members for years.

By 7:00 a.m., hundreds of participants had formed a line that curled around El Paso’s unassuming Chihuahuita Park. Over blue shirts required for participation, they bundled in coats and blankets, some toting folding chairs and coolers of lunch. Kids ran around the playground, blue shirts reaching their knees. 800 feet away—across train tracks, the soaring border fence and the shallow Rio Grande—corresponding families gathered at an intersection in Juárez, wearing white shirts.

Miriam, a 27-year-old with bright pink lipstick and an impeccable ponytail, had been anticipating this day ever since she learned about the event on Facebook a couple years ago. “I really want to see my sister—it’s been four years since I saw her,” she explained in Spanish. “She can’t come here because she hasn’t been able to get her visa, and I still haven’t gotten my asylum. I’m fighting to get it.”

At 8:00, the line in the park began to move. Some pushed wheelchairs or strollers as they made their way towards a dirt opening next to the border fence. There, participants waited for hours on plastic chairs: Only 20 families could enter through the gate at a time. Miriam was number 82.

As she sat, Miriam exchanged texts and photos with her sister, aunts, and nieces, who waited in Juárez. Her daughter Mairim, a bubbly first grader, danced, collected rocks, and eagerly took our microphone and played reporter, asking about our family members: What are their names? Where do they live?

Miriam and Mairim (“Miriam” spelled backwards) left Juarez four years ago after receiving threats from a drug cartel. They settled in Oklahoma City, where Miriam sells burritos and tacos out of a food truck.

At 10:30, when families 81 to 100 were called on a loudspeaker, Miriam and Mairim lined up next to the border fence. Behind them was a woman who, with the exception of last year’s Hugs Not Walls, hadn’t seen her 36-year-old son in more than a decade. Ahead of them was mom with blotchy cheeks and teary eyes who hadn’t seen her own mother in eleven years. Mairim played with other kids in line, reaching small hands through the border fence and trying to spot family on the other side. She couldn’t recall meeting the relatives in person, but recognized them from years of video calls.

Hugs Not Walls is a logistical jigsaw puzzle, requiring sign-off from CBP, the International Water Commission, local law enforcement, and federal police in Mexico. It’s also subject to changes in the political climate: Last May, as the number of migrants at the border reached a record high, the event was abruptly cancelled. “Every time we do this, it could be the last one,” explained Fernando Garcia, director of the Border Network for Human Rights. “Having children in cages like that—or in a makeshift detention camp—under a bridge, all of that situation created a very tense relationship with CBP,” he added.

Mario Escalante, a US Border Patrol spokesperson, explained that the agency wasn’t able to support last May’s event. Still, Border Patrol maintained a light presence on Saturday, with just a couple of officers on site but with surveillance cameras looking over the event. “For us it’s business as usual: Maintain border security,” said Escalante. A similar event has been taking place at the border between Tijuana and San Diego since 2013.

After what felt to Miriam like an eternity of waiting, volunteers led the group down a concrete levy to the river. Mairim held her mother’s hand as she walked, waving enthusiastically to relatives walking down the levy’s south side. Miriam captured the moment on Facebook live.

One by one, those in blue shirts crossed a narrow, dusty plywood bridge into the dry riverbed on the Mexican side. They were assigned to line up as if starting a race, blue-shirted shoulder to blue-shirted shoulder, waiting for a man with a loudspeaker to tell them to hug. Ten feet away, those with white shirts did the same. Seeing her aunt just steps away, Mairim exclaimed, “Tía!” and broke into a run before the organizer instructed, “Not yet!” For a few tense seconds, the families stood looking at each other, separated only by a bit of cracked dirt.

When the organizer yelled, “Hug!” the wailing was immediate. Families collapsed into each others’ arms. Mairim would later say that she was “so excited to get hugging.” But in the moment, she stood in the middle of a group embrace, weeping. Feet away, other families went through the same routine of hugs, selfies, more hugs, more crying. Cameramen zoomed in on sobbing faces. Along the levy, stoic Mexican police officers looked on. Mairim’s aunt picked her up and wiped the tears from beneath her niece’s pink glasses, joking that she had finally made it to Mexico.

A few hours later, the mother and daughter would board a bus for Oklahoma City. But first, the pair sat once again on the plastic chairs, waiting for permission to leave. Miriam couldn’t stop smiling. She wished she had more time with family, she said, but she was thankful for those three minutes. Sitting next to her mom, a resigned Mairim stared down at her lap, lips quivering.