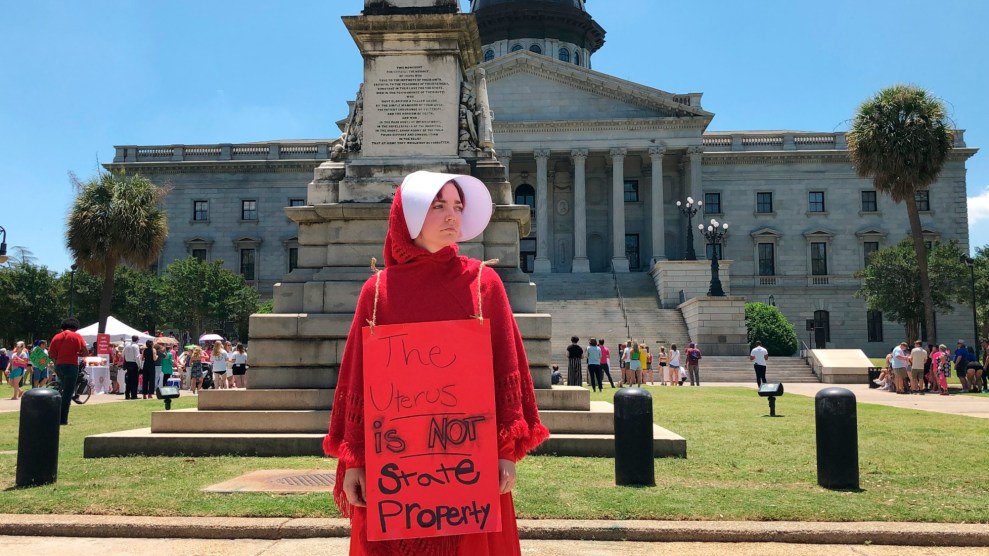 A woman dressed in a costume from "The Handmaid's Tale" silently protests during a rally to maintain abortion rights, Tuesday, May 21, 2019, in front of the Statehouse in Columbia, S.C. Jeffrey Collins/AP Photo

Lawmakers in South Carolina amended their extreme anti-abortion legislation this week—to make it even more extreme by removing exemptions for victims of rape and incest.

The so-called fetal heartbeat bill would ban abortion when a heartbeat can be detected, which is around six weeks, before many women know they’re pregnant. It would also impose potential criminal penalties for doctors who perform abortions after that point.

The original bill carved out exceptions for cases of rape and incest. But on Tuesday, a subcommittee in the state senate passed an amendment to remove those exceptions. The 4-3 vote, along party lines, sends the amended bill to the full Senate Medical Affairs Committee. If the bill passes the committee, it will go on to the full South Carolina senate for a vote.

Republican state Sen. Richard Cash introduced the amendment, stating, “Rape and incest are terrible crimes. They cause so much pain and suffering. It is understandable that women who have been the victims of such crimes may wish not to carry babies if a baby is conceived to full term. However, there are other considerations.”

“I cannot believe what I am hearing,” said Democratic state Sen. Kevin Johnson, who also sits on the Senate Medical Affairs Committee, adding, “If this amendment passes and the bill passes, now we are requiring a lady who should have a right to choice to not be allowed to choose what she wants with her body, and now we’re saying although you were innocent and were raped, you’ve got to carry that baby for nine months. That’s just horrific.”

The legislation is part of a nationwide push in Republican-led legislatures for abortion bans early in pregnancy. Nine states—Georgia, Ohio, Kentucky, Louisiana, Alabama, Mississippi, Missouri, Utah, and Arkansas—have already passed pre-viability abortion bans. State lawmakers, emboldened by the confirmation of conservative Justice Brett Kavanaugh in 2018, hope that by passing laws which directly challenge the precedent set in Roe v. Wade, they can force the Supreme Court to examine and overturn its landmark 1973 decision.

So far, none of these bans have survived a legal challenge, but that hasn’t kept lawmakers from continuing to pass them—even though some anti-abortion groups have openly questioned the strategy.