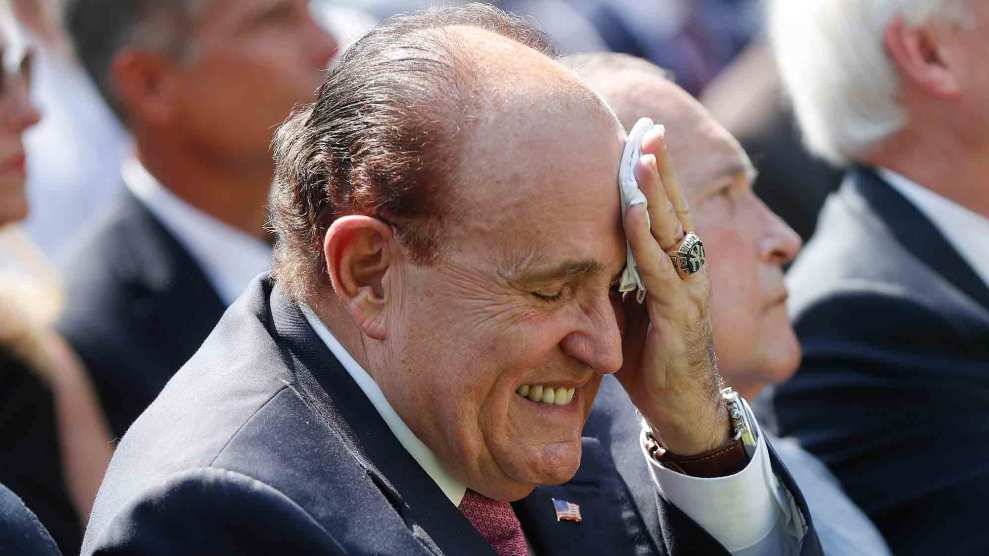 As Rudy Giuliani and Donald Trump squawk that the president’s quid-pro-quo-ish call with Ukrainian President Volodymyr Zelensky was only prompted by Trump’s heartfelt desire to address “corruption” in that former Soviet bloc nation, a new scandal has emerged in the United States that illustrates how corruption works here. This caper has implicated associates of Giuliani, a former Republican member of Congress, and a pro-Trump political action committee run by Linda McMahon, the World Wrestling Entertainment honcho who was Trump’s first head of the Small Business Administration, and advised by Sean Spicer, the prevaricating Trump press secretary who now sweats it out on Dancing with the Stars. And it’s all about campaign contributions and foreign influence—and the ability of players to hide shady or illegal action.

On Thursday morning, four American citizens were indicted by the feds. The group included Lev Parnas, who was born in Ukraine, and Igor Fruman, who was born in Belarus. Parnas and Fruman have been the Rosencrantz and Guildenstern of the Trump-Ukraine scandal. While pursuing a big energy deal in Ukraine, the pair worked with Giuliani, who has said he was their lawyer, to dig up dirt on former Vice President Joe Biden. Parnas and Fruman set up meetings for Giuliani with Ukrainian officials, and they pressed Ukrainian officials to launch investigations that could yield derogatory information on Biden and that could unearth proof that in 2016 the Ukrainian government colluded with the Hillary Clinton campaign by leaking information on Trump’s campaign manager, Paul Manafort, who had been a consultant to the brazenly corrupt Ukrainian president Viktor Yanukovych. This is the sort of dirt that Trump asked Zelensky for in the now-infamous, do-me-a-favor July 25 phone call.

And, oh yeah, Parnas and Fruman were big GOP donors. They were trying to buy influence within Republican circles to advance their political agenda in Ukraine and their own business interests in the United States and abroad. And their effort seemed to have partially paid off—at least until it led to their arrests. Another endeavor—allegedly using money from a Russian national to make illegal donations to GOP candidates in Nevada in order to get a foothold in the legal marijuana business in that state—did not come to fruition, according to the indictment.

The indictment filed by the US attorney in the Southern District of New York charges the pair—and two other men named David Correia and Andrey Kukushkin—with violating campaign finance law by hiding the source of contributions that Parnas and Fruman made to Republican campaigns. But the indictment also tells the story of what appears to be awfully damn close to outright political bribery.

Starting in March 2018, the prosecutors allege, Parnas and Fruman “began attending political fundraising events in connection with federal elections and making substantial contributions to candidates…with the purpose of enhancing their influence in political circles and gaining access to politicians.” The pair, the indictment says, “sought to advance their personal financial interest and the political interests of at least one Ukrainian government official with whom they were working.” And the US attorney charges that they created a shell corporation called Global Energy Producers through which they could make donations—and keep their names out of it.

Their first big donation was a $325,000 contribution in May 2018 to what the indictment calls “Committee-1,” which media reports have identified as the America First Action SuperPAC. This outfit is chaired by McMahon, and Spicer is listed on its website as the group’s “senior adviser and spokesman.” This GOP group is dedicated to raising big bucks to get Trump reelected, and in 2018 it raised and spent millions to support Republican congressional candidates.

About the time Parnas and Fruman made that whopping donation to the America First Action SuperPAC, according to the indictment, they also committed $20,000 to “Congressman-1,” who has been identified by reporters as Pete Sessions, a senior Texas Republican who at the time was in a tough fight to retain his seat. America First Action, by the way, was also committed to helping Sessions. Through that 2018 race, it spent about $3 million to assist him.

To recap: We have two fellows looking to score a big deal in Ukraine and eager to win sway within the ruling Republican Party handing loads of money to Republicans. But the tale gets more interesting than the same-old, same-old influence game. The indictment notes that “at and around the same time” Parnas and Fruman were making their promise to funnel significant money into Sessions’ campaign, Parnas met with Sessions and sought his “assistance in causing the U.S. Government to remove or recall the then-U.S. ambassador to Ukraine.” Parnas’ efforts to remove Ambassador Marie Yovanovitch “were conducted,” the indictment says, “at least in part, at the request of one or more Ukrainian government officials.” As these two wheeler-dealers were trying to land a major energy deal in Ukraine, they were also trying to do the bidding of Ukrainian officials in the United States, using campaign contributions to affect US policy.

The indictment leaves out one highly intriguing fact. At the time Parnas and Fruman were raising money for Sessions and pouring a huge amount into the super-PAC that was helping him and other vulnerable Republicans, the Congress member sent a letter to Secretary of State Mike Pompeo calling for Yovanovitch’s removal—the exact thing Parnas and “one or more Ukrainian government officials” wanted. In the note to Pompeo, Sessions said, “I have received notice from close companions that Ambassador Yovanovitch has spoken privately and repeatedly about her disdain for the current administration.” Sessions fired off this letter shortly after meeting with Parnas and Fruman.

Sessions has told reporters that he, not Parnas and Fruman, raised the issue of Yovanovitch during their meeting: “I sought their input.” He has denied he pushed for Yonavitch’s removal at their behest. But Sessions’ this-was-my-idea claim is contradicted by the US attorney—that is, the Department of Justice—for the indictment clearly states that when Parnas met with Sessions he requested Session’s help in forcing Yovanovitch out of Ukraine. (And Yovanovitch was recalled and sidelined the following year.)

This is how it looks: Two Giuliani cronies promised money to Sessions and asked him to lean on Pompeo to give Yovanovitch the boot; the wheel was probably also greased by the $325,000 donation to the super-PAC that was backing the congressman; and Sessions did what was asked. Kelly Sadler, a spokesperson for America First Action, told the Daily Beast that there was no agreement that the money from Parnas and Fruman’s company would be used to support Sessions. But it’s no secret that independent-expenditure PACs often informally tell donors how their money will be used and are mindful of which candidates a donor wants to support. Proving these nods and winks can be difficult for prosecutors and reporters. But certainly Parnas and Fruman could point to that big-money contribution to McMahon and Spicer’s super PAC as a donation that could be of great benefit to Sessions.

Unfortunately for Paranas, Fruman, and their so-far unnamed Ukrainian confederates, Sessions lost that race in 2018 to Democrat Colin Allred. Just last week—good timing!—Sessions announced he is now running for a House seat in a neighboring district where the GOP incumbent is retiring. Sessions could not be reached for comment. Earlier this week, he told a local television channel, “They did come by my office and I did meet them and I did meet them off the Hill and they did become contributors. That is not unusual for you to meet people who then become contributors.”

So if you want to talk about corruption, here’s a great case: secret donations to Republicans made to advance the interest of a Ukrainian official by sketchy businessmen linked to an overseas dirt-gathering operation. And it sure seemed to work. Campaign cash was delivered; a letter was written. Rather than fretting about corruption in Kiev, Giuliani and Trump ought to focus on what goes on within their very own swamp.