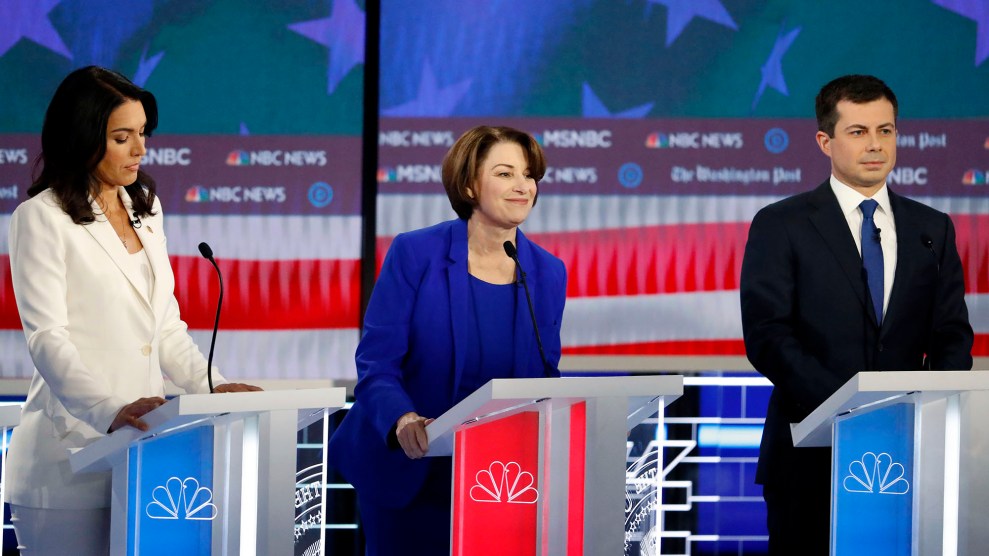 During the Democrat debate on Wednesday night, presidential candidate Amy Klobuchar brought gender disparity in politics to the center stage. When Andrea Mitchell asked Klobuchar to clarify a statement she’d made about the heightened standards women face to achieve the same accomplishments as men, she didn’t mince her words. “What I said was true. Women are held to a higher standard, otherwise we could play a game called name your favorite woman president.”

In the quote Klobuchar was asked to clarify, she had insinuated that women with equivalent experience to Pete Buttigieg—whose political experience tops out at mayor of the 100,000-person South Bend, Indiana—wouldn’t make it to the debate stage. After Klobuchar reassured Buttigieg, to her immediate left, that it wasn’t a swipe at him, she elaborated while he watched on sheepishly. “I think any working woman out there, women at home, know exactly what I mean. We have to work harder, and that’s a fact.”

Then, shifting gears, Klobuchar went on to pitch herself as the candidate to beat, institutional shackles or not: “I think what matters is if you’re smart, competent, and if you get things done,” she said. “I govern both with my head, and my heart, and if you think a women can’t beat Donald Trump, Nancy Pelosi does it every single day.”

.@AmyKlobuchar: "If you think a woman can’t beat Donald Trump, Nancy Pelosi does it every single day." pic.twitter.com/UJWLVU7M3M