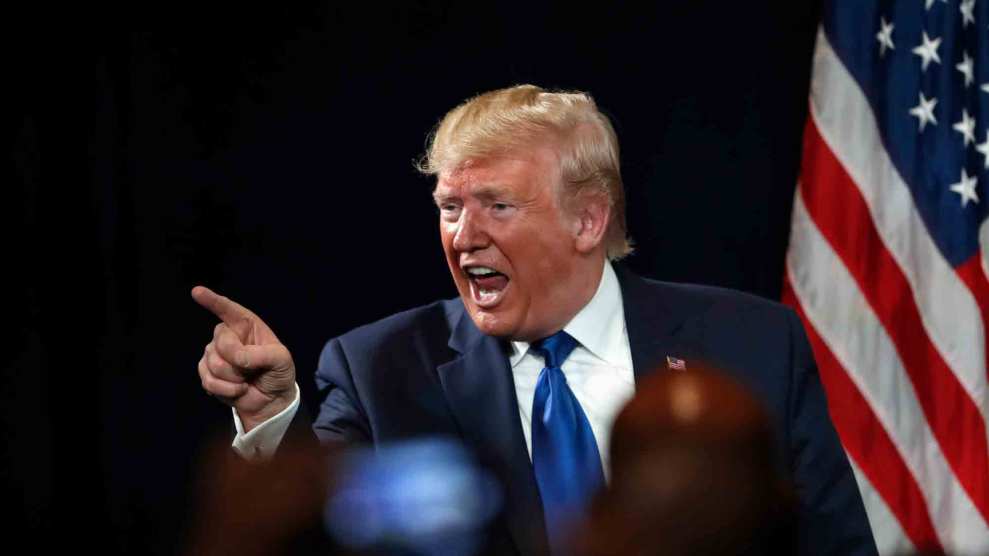 In the past two weeks, as the House impeachment inquiry has proceeded, President Donald Trump has ramped up his public attacks on the US government whistleblower who triggered the scandal, and in this stretch the flow of threats, including death threats, directed at the whistleblower and his private attorneys has intensified. According to a source close to the legal team, “threats, including physical harm, and harassment have definitely increased.” The source adds, “Law enforcement is involved.”

Since September 20, Trump has tweeted almost 100 times about the whistleblower. And the pace has quickened in the past week, with Trump zeroing in on the whistleblower on 16 occasions. Trump has assailed the whistleblower as a traitor and deep state operative. In remarks made at the US mission to the United Nations on September 27, Trump compared the whistleblower to a “spy,” and added, “You know what we used to do in the old days when we were smart? Right? With spies and treason, right?” This was a clear reference to execution: This guy deserves to die. In recent tweets, Trump has approvingly quoted his defenders, who have accused the whistleblower of being corrupt and conspiring with Democrats to topple Trump, and Trump has blasted the whistleblower’s attorneys as “fake.” On Monday, Trump tweeted: “the Whistleblower, his lawyer and Corrupt politician Schiff should be investigated for fraud!”

Trump’s remarks and tweets—and those of his amen choir—have arguably placed a target on the whistleblower. On Monday, Joe diGenova, a former US prosecutor who, with his wife, Victoria Toensing, has provided advice to Trump, unleashed a massive amount of vitriol on the whistleblower. During a radio interview, diGenova exclaimed, “He worked at the CIA, and he is part of a political assassination. It’s now underway, and all of the listeners should realize that that’s what this is about. This is a fraud on the Constitution and a fraud on the American people.” DiGenova referred to the whistleblower with a name that has been reported in an online conservative publication (and not confirmed) but then said, “Okay, we won’t identify him.” He added, “his name is as follows: John Wilkes Booth.”

Equating a US government whistleblower, who followed the rules and whose complaint was deemed legitimate by the inspector general of the intelligence community, to a presidential assassin was an extreme and cavalier move. The whistleblower’s legal team does worry that such rhetoric raises the danger level for the whistleblower and for them. When a former Obama administration official was mistakenly identified by MAGAites on Twitter as the whistleblower, he received numerous death threats. Yet diGenova’s inciting performance was not shocking, given that he has referred to the Democrats’ impeachment inquiry as “regicide.” (DiGenova is no neutral observer in all this. He and Toensing have been representing Ukrainian oligarch Dmytro Firtash, who is tied to the Ukraine scandal. They also are lawyers for John Solomon, the former Hill columnist who peddled unsubstantiated allegations regarding the activity in Ukraine of Joe Biden and his son Hunter. And Toensing has worked with Rudy Giuliani to dig up derogatory information on the Bidens in Ukraine.)

As more evidence of Trump’s effort to lean on Ukrainian president Volodymyr Zelensky to produce political dirt useful for Trump emerges, Trump and his defenders on Capitol Hill and the media have focused on the whistleblower. In doing so, they’re repurposing the strategy that served Trump well during the Russia scandal. The case was rather clear in that instance: Vladimir Putin mounted a secret operation in 2016 to help Trump win the presidency, and Trump aided the Russians by vigorously denying any such attack was underway. His campaign also repeatedly signaled to Moscow it did not mind the attack, as campaign aides met with Russian intermediaries and sought to develop secret contacts with the Kremlin while the assault was occurring. Yet as investigations of this scandal were launched and pursued, Trump and his allies focused on side-issues related to the investigations themselves. How was the FBI probe initiated? Why was one particular surveillance warrant obtained? They claimed the real story was a deep state plot against Trump waged by the CIA, the FBI, the media, the Democrats, and who-knows-who-else. They did all they could to divert attention from the Russian attack and Trump wrongdoing (such as Trump lying about his pursuit of a huge Russian business deal while he was campaigning), and they attempted to shift the focus to claims that the inquiries that sought to uncover the truth about Putin’s information warfare against the United States and Trump’s interactions with Russia were not on the level.

It all sort of worked. The Russia scandal never became a political threat to Trump, and Trump’s base—thanks to Fox News and other collaborators in the conservative media—now believes the actual scandal was not the Russian assault on US democracy but something they call Spygate.

So it’s only natural that Trump and his crew are going back to that well. The whistleblower who anonymously filed a complaint, based mostly on secondhand information, alleging Trump had abused his office for political gain, did trigger the Ukraine scandal. But since his report became public in mid-September, House investigators have questioned a slew of firsthand witnesses who have provided compelling evidence to back up and expand the complaint. And the transcripts of many of these interviews have been made public in the past week. Consequently, the public record is now replete with direct testimony from named US officials, and this testimony collectively tells the tale of a president who set up a behind-the-scenes foreign policy operation, guided by Giuliani, to muscle (or extort) Zelensky. The whistleblower’s complaint is no longer needed. He can be dismissed from this episode: Thank you for your service.

But, no…Trump and Republicans are demanding that he be named—last week, Sen. Rand Paul (R-Ky.), appearing at a rally with Trump, angrily called on the media to publish the whistleblower’s name—and that the whistleblower be summoned as a witness in the House impeachment hearings that are beginning this week. The point? To turn the whistleblower into a piñata, someone who can be grilled about his political views and connections. Did you ever work with Joe Biden? Well, maybe he did as part of his official duties. After all, Biden was vice president for eight years and routinely worked with many employees of the national security community, and his portfolio included Ukraine. But—aha!—then the whistleblower can be cast as a Democratic operative and the origins of the whole impeachment inquiry questioned. Once again, Trump and his minions are looking to raise suspicions about how an investigation began and to generate yet another conspiracy theory that promotes an alternative (and misleading) narrative that sidesteps the basic facts of a scandal. In some ways, it’s all they got.

Back in the real world, impeachment is no longer about the whistleblower. His motives, background, political views—none of that matters, given the thousands of pages of testimony and documents that have come out and that depict the actions of Trump, Giuliani, and the rest of the gang. This material, obviously, is not good for Trump and his side. So Trump and his handmaids need to change the channel—and there’s the whistleblower. That’s their target. And they don’t give a damn that when you make someone a target—when you accuse him of mounting a coup, when you call him a threat to democracy, when you compare him to a presidential assassin—that can send a very serious and dangerous message.