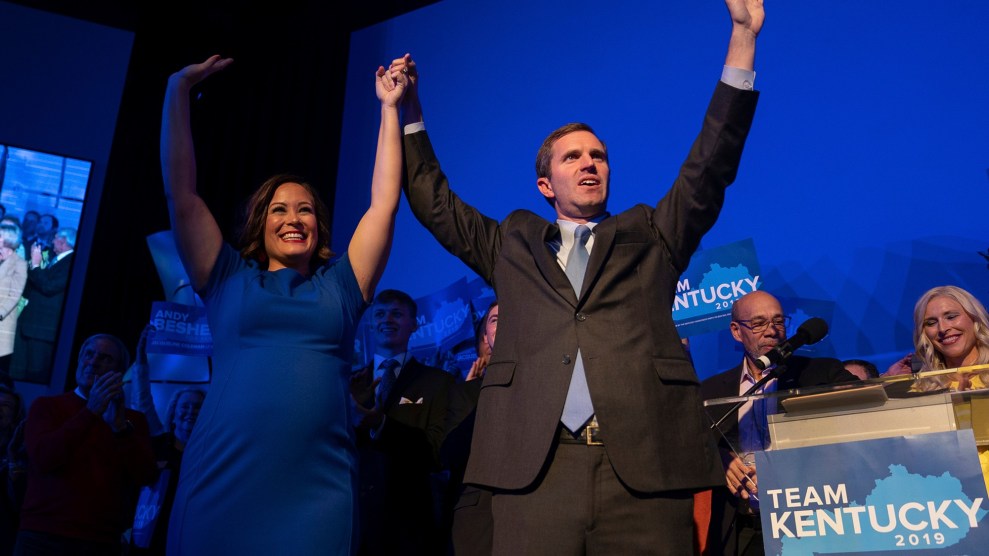 Kentucky Attorney General Andy Beshear, who won the governor's race on a pro-choice platform in a deep-red state, acknowledges supporters at his election night party in Louisville on November 5.Bryan Woolston/AP Photo

Two days later, a prominent group of national Democrats sent the opposite message.

On Monday, the Democratic Attorneys General Association, which works to elect Democratic state attorneys general, vowed not to support anti-abortion candidates. That means it will endorse Democratic candidates in general elections and give them financial support only if they back the right to an abortion, even in states whose voters are overwhelmingly opposed to abortion. The group does not endorse or give money in Democratic primaries.*

The association’s decision came just weeks after Kentucky Attorney General Andy Beshear, an outspoken pro-choice Democrat, defeated Gov. Matt Bevin in an upset. Beshear’s victory signaled that Democrats don’t need to be anti-abortion to win in the South. His win also highlighted the importance of the attorney general position as a stepping stone for higher office.

Although Edwards is an outlier in the national Democratic Party, he wasn’t the only anti-abortion Democrat to run for governor this cycle. Mississippi Attorney General Jim Hood, who lost against Republican Tate Reeves earlier this month in the state’s governor’s race, identifies as a “pro-life” Democrat. Hood also supported Mississippi’s “fetal heartbeat” bill, which bans abortion at around six weeks, telling Mississippi Today that he will continue to defend “every single law passed protecting the unborn.” Hood gave up the attorney general position to run for governor, but in the future, anti-abortion attorney general candidates like him will have to run without the political and financial support of the Democratic Attorneys General Association.

“We had two Democratic attorneys general running for office, Andy Beshear in Kentucky and Jim Hood in Mississippi,” says Sean Rankin, executive director of the Democratic Attorneys General Association. “One was pro-choice, and one was pro-life. The narrative in the past has been to win in the South you have to be pro-life, but Jim Hood didn’t win, and Andy Beshear did, so I think that myth is changing.”

Hood’s decision to support Mississippi’s abortion ban in court highlights one of the ways attorneys general can affect access to abortion. Unlike Hood, other Democratic attorneys general across the country have declined to support similar abortion restrictions in court. Last year, Iowa Attorney General Tom Miller refused to defend his state’s six-week abortion ban, saying that it violated his beliefs and that the ban, “if upheld, would undermine rights and protections for women.”

Declining to defend anti-abortion laws in court is just one of the tools attorneys general have to affect reproductive rights policies. Earlier this month, a coalition of Democratic attorneys general successfully blocked the Trump administration’s “conscience rule,” which would have allowed providers to deny patients access to a range of health care services, including abortions and contraception, on the basis of their moral and religious beliefs. Democratic attorneys general have also sued the Trump administration over other anti-abortion policies, such as the “gag rule,” which blocks federal funding to organizations that perform or refer patients for abortion services.

“As the battle for reproductive rights unfolds at the ballot box, in statehouses, and courtrooms across this country, there is no group of elected officials better positioned to lead the fight for our rights than state Attorneys General,” Oregon Attorney General Ellen Rosenblum, a co-chair of the Democratic Attorneys General Association, said in a statement.

Correction: An earlier version of this article misstated the stage of an election in which the Democratic Attorneys General Association gets involved. It endorses and provides financial support in general elections, not primaries.