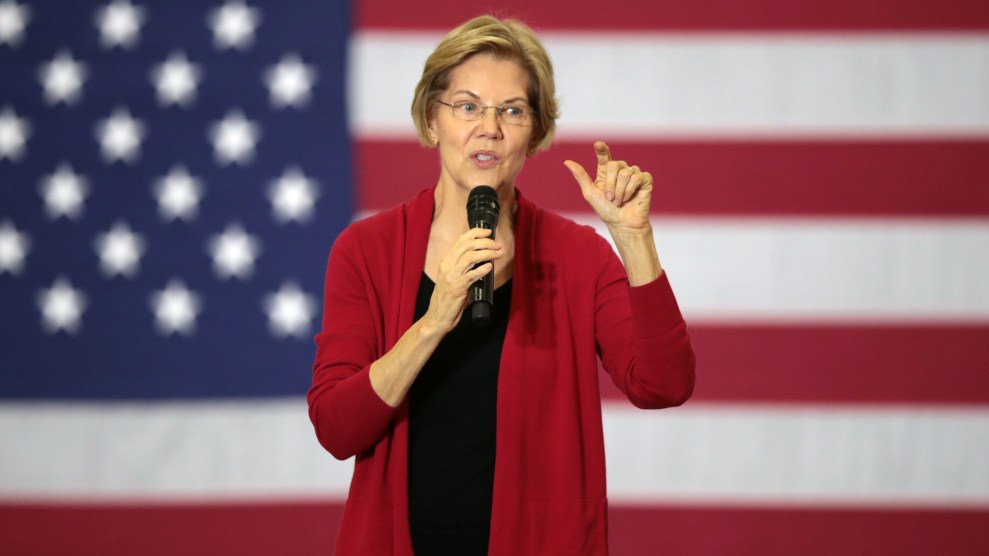 Sen. Elizabeth Warren (D-Mass.) unveiled a wide-ranging plan Tuesday to improve care for America’s veterans, active-duty service members, and their families, proposing to end discrimination toward LGBTQ, immigrant, and HIV-positive troops while substantially increasing the number of staff employed by the Department of Veterans Affairs.

Her campaign’s suite of ideas comprise Warren’s most comprehensive statement yet of how she would approach the persistent problems ailing Americans in uniform, including unsafe housing, unreliable health care, and mental illness. But the plan includes few details on how much it will cost or how the burden will be split between the Pentagon and VA.

“All three of my brothers served, so I know the responsibility we have to our service members, military families, and veterans,” she wrote in a Medium post introducing the plan. “I will honor our troops not only by executing sound military strategy, but also by caring for our veterans after they take off the uniform.”

Since joining the Senate Armed Services Committee in 2017, Warren has increasingly made reforming the Defense Department a key part of her policy platform. Her campaign has already released plans to curb the influence of defense contractors and decrease the military’s carbon footprint, but Tuesday’s policy rollout addresses veterans’ issues that have stymied presidents from both parties.

Among Warren’s top priorities is mental illness, a problem that has grown more urgent as suicide rates among active-duty personnel reached historic highs last year and veterans remain twice as likely to die by suicide as civilians. Warren vowed to cut veteran suicides in half within her first term. To do so, she proposes targeted research into the causes of suicide and hiring more mental health specialists at VA hospitals.

Will Goodwin, a US Army veteran and director of government relations for VoteVets, a progressive advocacy group, says Warren’s plan crucially did not limit its focus to just the VA, but covered issues like military housing and the scourge of America’s endless wars, which formally fall under the purview of the Defense Department but still affect how long veterans are deployed and how they transition to civilian life. “Military family readiness is hugely important to that,” he says. “The more time people spend away from their families can affect their transition to civilian life afterward.”

For military families, Warren would invest in child care centers at military bases and create a bill of rights for tenants of military housing. She would also reimburse military spouses for costs associated with changing jobs when their partners move between bases. Her plan calls for working with community nonprofits to treat veterans living with addiction and investing in programs to connect veterans with jobs and education through the GI Bill. Her campaign would not specify how much these new policies would cost, but in some cases, existing Warren policy ideas would just be extended to veterans. She already supports canceling student loan debt and making public college free, moves that should help veterans seeking higher education after leaving military service. But her plan would also empower the Consumer Protection Financial Bureau to ensure that veterans aren’t cheated or defrauded out of their GI benefits.

Many planks of her plan for veterans and active-duty service members are popular among other congressional Democrats. Echoing a plan originally pitched by fellow Senate Armed Services Committee member Sen. Kirsten Gillibrand (D-N.Y.), Warren supports removing sexual assault cases from the military chain of command and ensuring that survivors who come forward receive a “competent, empowered” advocate on their behalf. She also wants sexual harassment and the distribution of revenge pornography to be standalone crimes under military law.

In her most direct shot at President Donald Trump, Warren says she would reverse the Pentagon’s ban on transgender service members on her first day in office and ensure that service members living with HIV can “serve and deploy.” Originally decreed by tweet in July 2017, Trump’s transgender ban surprised Pentagon leaders and put the status of thousands of transgender service members in jeopardy. In another pointed rejection of Trump policy, Warren promises to recruit immigrants with “specialized skills or language abilities” into the military and ensure that those who serve have an easier path to naturalization. Trump’s strict immigration policies have stymied the Pentagon’s recruitment of immigrant enlistees even led to the possibility of deportation for some active-duty troops.

Perhaps the most difficult problem Warren addresses is mismanagement at the Department of Veterans Affairs, one of the few areas left in Washington where politicians of both parties are united in their outrage. The two veterans still in the Democratic primary, South Bend Mayor Pete Buttigieg and Rep. Tulsi Gabbard (D-Hawaii) have also been critical of VA hospitals, which are plagued by lengthy wait times and preventable patient deaths. Neither candidate has unveiled a comparable policy plan for veterans yet, but in August, Buttigieg pledged to recruit more VA clinicians by increasing their pay and “slashing red tape.”

But Warren, like Buttigieg and Gabbard, rejects the Trump administration’s policy to privatize more VA health care, even as she acknowledges the need to be “clear-eyed” about leadership issues at the VA. “The truth is that care provided by VA outperforms care at non-VA hospitals, as multiple studies have shown,” Warren writes. Her campaign promises to fill nearly 50,000 staff vacancies and upgrade outdated infrastructure and medical equipment without adopting Trump’s shift of some VA activities the private sector.

Trump’s oversight of the VA has been marked by enthusiastic rhetoric but an inconsistent, occasionally chaotic management style. After installing hospital administrator David Shulkin as secretary of veterans affairs, Trump removed him for opposing the administration’s privatization plan, which had been promoted internally by three influential Trump associates whom ProPublica dubbed the “shadow rulers” of the VA. Trump’s first choice to succeed Shulkin was his White House doctor, who withdrew from consideration after reports of workplace misconduct. A Pentagon appointee, Robert Wilkie, was later confirmed to head the VA.

“A lot of this boils down to competent administration,” Goodwin says. “It’s a matter of stability and continuity paired with the proper leadership.”