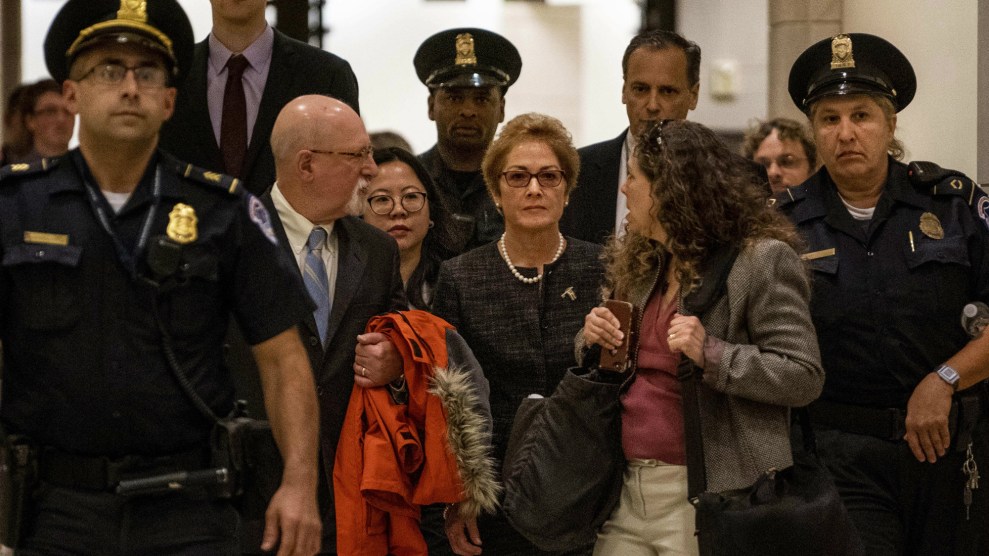 The former US Ambassador to Ukraine told lawmakers last month that Rudy Giuliani and other allies of President Donald Trump had teamed up with corrupt players in that country to push her out of her job as they sought to dig up dirt aimed at helping Trump’s 2020 reelection effort.

“Many of these events, and the false narratives that emerge from them, resulted from an unfortunate alliance between Ukrainians who continue to operate within a corrupt system and Americans who either did not understand that system, that corrupt system, or who may have chosen, for their own purposes, to ignore it,” Marie Yovanovitch told members of three congressional committees compiling evidence for the ongoing impeachment inquiry. Democrats on Monday released the full transcript of her October 11 deposition, as well as the transcript of the October 16 deposition of Michael McKinley, who resigned last month from his post as a senior adviser to Secretary of State Mike Pompeo.

Yovanovitch is a respected career State Department official who pursued an anti-corruption agenda after becoming ambassador to Ukraine in August 2016. Parts of her testimony have previously been reported. But the full transcript highlights Yovanovitch’s view that she had entered a sort of bizarro world in which the White House aligned itself with an array of questionable political and business figures in Ukraine in an effort to undermine her work.

“Our efforts were intended, and evidently succeeded, in thwarting corrupt interests in Ukraine who fought back by selling baseless conspiracy theories to anyone who would listen,” Yovanovitch testified. “Sadly, someone was listening, and our nation is worse off for that.”

At the urging of Giuliani, who is Trump’s personal lawyer, the president forced Yovanovitch out of her post in May. That was one in a series of steps taken by the former New York City mayor in an alleged effort to bypass the State Department and refocus US foreign policy toward Ukraine to help Trump politically. Giuliani also sought to enlist Ukrainian officials in his efforts to dig up dirt on Joe Biden and discredit special counsel Robert Mueller’s Russia investigation. White House chief of staff Mick Mulvaney recently acknowledged—and later denied—that Trump delayed military aid to Ukraine in part to pressure the country’s leaders to investigate Democrats.

In her testimony, Yovanovitch explained that she learned that Yuriy Lutsenko, the Ukrainian prosecutor general during most of her tenure, was instrumental in efforts to force her out. She said that he was unhappy about her push to curb corruption in the prosecutor’s office, which has long been notorious for functioning as a tool of powerful politicians and oligarches and for using legal threats to extort payoffs.

Asked if Lutsenko was personally corrupt, Yovanovitch said, “I have certainty heard a lot of people call him corrupt, and there are certainly a lot of stories about his actions that would indicate that.”

In late 2018, Giuliani—assisted by two since-indicted associates, Lev Parnas and Igor Fruman—made contact with Lutsenko. The Ukrainian prosecutor told Giuliani, and publicly asserted, that Yovanovitch had given him a “do not prosecute” list populated with the names of people the ambassador supposedly wanted to protect. Lutsenko later recanted that claim. Giuliani also pushed an unfounded claim that Yovanovitch had urged embassy officials to ignore Trump’s orders. Yovanovitch told lawmakers both allegations were completely false.

Still, Yovanovitch says she learned through a Ukrainian officials that Lutsenko had spoken directly to Trump. According to Yovanovitch, she was told that Lutsenko told colleagues that during a call he had with Giuliani in January the former mayor had patched in the president.

Meanwhile, Parnas and Fruman were also attempting to force Yovanovitch out. She testified that she learned from Ukraine’s interior minister in February that the duo “were interested in having a different ambassador at the post, I guess because they wanted to have business dealings in Ukraine.” Parnas and Fruman had hoped to broker a deal to sell liquified natural gas from the United States to Ukraine’s national gas company. But Yovanovitch said that if those plans were legitimate, they had no reason to see her as an obstacle: “One of the biggest jobs of an American ambassador…is to promote US business,” she said. “If legitimate business comes to us…that’s what we do, we promote US business.”

Parnas and Fruman were indicted last month for various campaign finance violations. The pair gave campaign donations to  former Rep. Pete Sessions (R-Texas) who then pressed the State Department for Yovanovitch’s removal. The indictment says the men acted at the direction of a Ukrainian official. That official is reportedly Lutsenko.

Another Ukrainian with an axe to grind against Yovanovitch was Viktor Shokin, Lustsenko’s predecessor as prosecutor general. Shokin has claimed that Biden forced his firing to stop him from investigating a company, Burisma, that paid Biden’s son Hunter to serve on its board. (Shokin was actually forced out under international pressure due to his failure to pursue corruption cases and was not actively investigating Burisma at the time he was ousted.) Yovanovitch testified that, under her supervision, the US embassy in January 2019 rejected an application by Shokin to travel to the United States due to his “known corrupt activities.”

“The next thing we knew Mayor Giuliani was calling the White House as well as the assistant secretary for consular affairs, saying that I was blocking the visa for Mr. Shokin, and that Mr. Shokin was coming to meet him and provide information about corruption at the embassy, including my corruption,” Yovanovitch testified.
In his visa application, Shokin claimed that he wanted to visit his children, who live in the United States. But according to Giuliani’s public statements, the former prosecutor was actually coming to the US to meet with him. “At the end of the day, he lied on his visa application,” Yovanovitch said.
Still, Shokin’s claims, pushed by Giuliani and conservative media outlets, were used against the ambassador.
By May, Giuliani—egged on by Lutsenko, Parnas, Fruman, Shokin, and others with a personal stake in Yovanovitch’s ouster—had convinced Trump she had to go. Yovanovitch said that Assistant Secretary of State Phil Reeker told her that Secretary of State Mike Pompeo “had tried to protect me, but was no longer able to do that.”
Rep. Sean Patrick Maloney (D-N.Y.) summed up her predicament: “You were an obstacle, it seems, to President Trump’s political interests and the financial interests of Mr. Giuliani’s now-indicted associates. Is that the sum and substance of your testimony today?”
“That appears to be how events have unfolded,” Yovanovitch said.