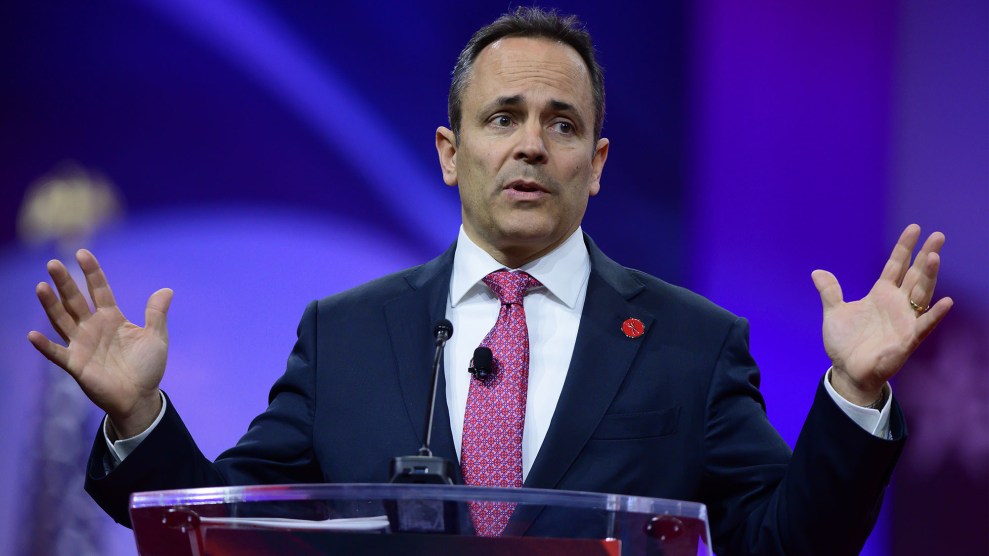 The Trumpiest governor in the country has finally admitted that he lost his reelection campaign earlier this month. On Thursday, Kentucky Gov. Matt Bevin conceded defeat to Democrat Andy Beshear.

On election night, Bevin pledged to fight on, despite trailing Beshear by about 5,000 votes after everything had been counted. The Republican incumbent had cited “irregularities’—without offering any evidence of what those issues might be—and the Republican state Senate president had briefly floated having the state legislature step in to throw the election to Bevin, only to back down after immense public backlash.

Kentucky is an incredibly friendly state to Republican politicians, but Bevin had spent his four years in office racking up enemies, particularly by attacking the state’s public teachers. As I wrote in our September/October issue:

Last year, when teachers held a sick-out to protest Bevin’s proposed pension cuts, the governor unleashed an unhinged rant. “Here’s what’s crazy to me,” he told a reporter. “I guarantee you somewhere in Kentucky today a child was sexually assaulted that was left at home because there was nobody there to watch them.” (Republicans in the state House passed a resolution condemning Bevin’s comments, which he later apologized for.)

In April, Bevin said that teachers taking a sick-out day to protest his pension proposals had led to a child being shot: “One thing you almost didn’t hear anything about while we had people pretending to be sick when they weren’t sick and leaving kids unattended to or in situations that they should not have been in—a little girl was shot, 7 years old, by another kid.” (Beshear tweeted in response: “Despicable. Matt Bevin is unfit to govern. Kentucky families, teachers, and kids deserve so much better than this governor.”)

And Bevin has compared teachers and other public employees concerned about his pension plan to drowning victims. “They’re fighting you, biting you, pulling you under,” he said. “You just need to knock them out and drag them to shore.”