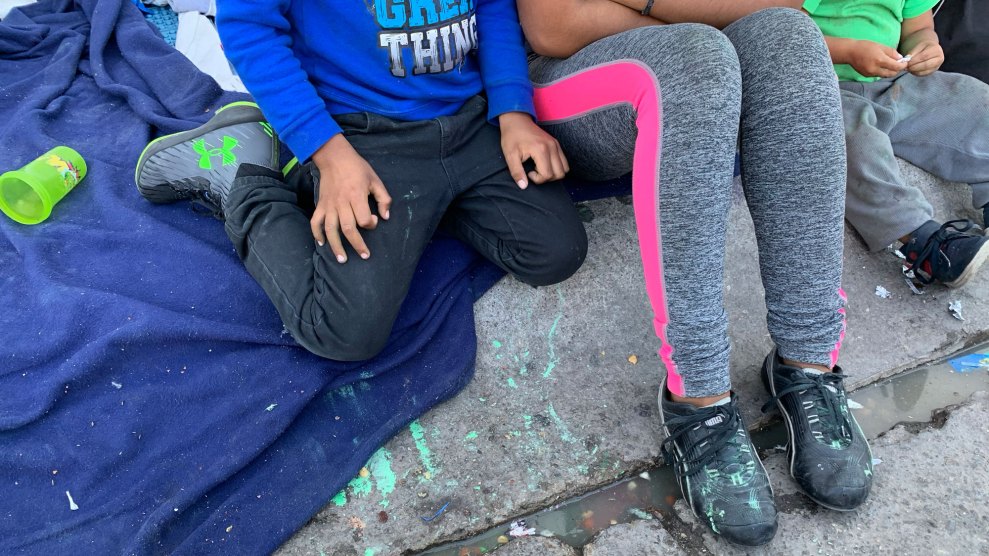 A Mexican woman and her children fled one of Mexico's most dangerous states in search for asylum in the United States. They are now stuck living at the migrant encampment in Ciudad Juárez, Mexico. Fernanda Echavarri

For the past year, the bridges that cross from Ciudad Juárez to El Paso have been surrounded by encampments of Central Americans waiting to apply for asylum in the United States. As the Trump administration clamped down even further on asylum over the summer and threatened Mexico with tariffs if it didn’t stop more Guatemalans, Hondurans, and Salvadorans from reaching the US border, those camps started to shrink—until recently, when the makeshift shelters began to be occupied by a new group of would-be asylees: Mexicans.

On a recent afternoon near the Paso del Norte bridge, I met a petite 23-year-old woman who’s been at the encampment with her husband and three young sons for the past five weeks. They fled the cartel-stricken state of Michoacán to seek asylum and are now sleeping on a sidewalk under a multicolor tarp.

“I wish I didn’t have to be here—it’s tough living here,” she told me while sitting on the sidewalk, keeping an eye on her youngest son. It was starting to get cold, and her kids had already gotten sick. But she couldn’t return to her hometown, she said. Before she headed north, a relative was murdered, his chopped-up remains delivered to the family in a bag. Shortly thereafter, there were whispers that a group in her town was kidnapping children, and when her sister, a police officer, confirmed the rumors and told her to flee, her family left immediately.

Now, with violent outbursts on the upswing across Mexico, there are more than 3,000 Mexican asylum seekers spread out near the three international bridges in Ciudad Juarez.

Around her at the encampment, dozens of tents and tarps lined both sides of the small street leading to the international port of entry. According to lawyers with Catholic Legal Immigration Network (CLINIC) and the American Civil Liberties Union, the first asylum-seeking Mexican families began settling along the border in Juárez in early September, after being turned away at the port of entry by US Customs and Border Protection (CBP). Now, two months later—with violent outbursts on the upswing across Mexico—there are more than 3,000 Mexican asylum seekers spread out in camps and shelters near the three international bridges in Juárez, according to estimates from volunteers, NGOs, and the ACLU. (The increase in asylum seekers coincides with an increase in the number of so-called family units from Mexico apprehended along the border: In the fiscal year that ended on September 30, there were 6,004 Mexican family unit apprehensions, up from about 2,200 in both fiscal 2018 and fiscal 2017.)

The thing is, advocates note, US immigration officials are legally obligated to process Mexican asylum seekers at the border. “They’re turning those asylum seekers right back into the country from which they’re fleeing prosecution,” said Shaw Drake, policy counsel with the ACLU Border Rights Center—and that’s in direct violation of US domestic and international laws signed after World War II that ensure that no state turns away refugees fleeing persecution in their home countries. Yet people at the camp say CBP officials send people back across the bridge all the time—a tactic known as metering that limits the number of people asking for asylum on any given day.

The young family from Michoacán found this out the hard way upon arriving in Juárez. On their first night there, they walked up the bridge, ready to petition for asylum at the port of entry. But before they could reach the US side of the bridge, CBP agents turned the family back to Mexico and told them they had to get on a list.

“This is illegal, this is cruel, and this is unfair.”

These waitlists started popping up around summer 2018, when Central American migrants trying to present themselves at legal ports of entry were told to wait in Mexico because CBP claimed it couldn’t process them in large groups. As the number of people requesting asylum grew, and as more and more migrant caravans arrived from Central America, the waitlists became the only way to get in front of a CBP official. It could be months until people’s numbers are called.

“This is illegal, this is cruel, and this is unfair,” said Tania Marie Guerrero, an attorney with CLINIC who’s working at the camps daily. “Ultimately, it is a judge’s job to decide who get asylum—it’s not up to CBP or Border Patrol.”

Since September, a second set of waitlists has been formed, this one with the names of thousands of Mexican citizens. The afternoon I visited, the list went up to 207 at Paso del Norte. The woman from Michoacán was number 51. If CBP continued calling out only a few numbers each week, she’d still have months to go. Other international bridges in Juárez have longer lists, and since each number is likely to represent a family of three or five, it’s hard to tell exactly how many Mexican citizens are waiting.

The camps are growing, and more people are expected to seek asylum in the United States as a result of recent public killings and shootouts across Mexico. Videos of Sinaloa Cartel gunmen shooting at police in broad daylight in a residential neighborhood went viral last month, terrifying the whole country. Last week, in a brutal attack in northern Mexico, nine members of a Mormon family were killed by assailants, who incinerated women and children. President Donald Trump tweeted about the incident, calling drug cartels “monsters” and offering help to Mexico’s president to “wipe them off the face of the earth.” Sen. Lindsey Graham (R- S.C.) said he would rather go to Syria than some places in Mexico: “There’s some places over there that are completely lawless.”

Of course, that’s exactly the argument that immigration lawyers have been making for months in response to the Trump administration’s Migrant Protection Protocols (a.k.a. “Remain in Mexico”) policy, which has forced more than 50,000 migrants, mostly from Central America, to wait out their court proceedings in Mexico. Not only is Mexico unsafe, they contend, but it’s especially dangerous for these migrants in limbo along the border.

At an October 29 press conference, CBP Acting Commissioner Mark Morgan attributed the rise of Mexican asylum seekers to smugglers who “started taking out social-media ads and telling Mexican nationals that if you grab a kid it’s your passport to the United States.” That line didn’t sit well with advocates like Guerrero, who visits the camps multiple times a week and holds informational sessions for anyone who will listen to make sense of the newest policy changes regarding asylum in the United States. She constantly hears about the fear and violence families are experiencing across Mexico and about the lack of support from law enforcement. “There’s nothing easy about this,” Guerrero said, pointing to the encampment behind her.

South Carolina Sen. Lindsey Graham said he would rather go to Syria than some places in Mexico: “There’s some places over there that are completely lawless.”

During his press conference, Morgan said CBP is working with the White House “and trying to develop new initiatives within the current legal framework that we can apply to the Mexican families as well.” Last week, BuzzFeed News reported on a secretive CBP pilot program in El Paso that significantly reduces the time Mexican families have to prepare their asylum case while in custody—making an already difficult process all but impossible to navigate for the vast majority of asylum seekers, many of whom have no access to legal counsel.

“This places asylum seekers at a complete disadvantage, setting them up for failure,” Guerrero said of the pilot program. In such a short timeframe and without legal representation while in detention, these migrants are “cold, sleepless, hungry, and fearful of people,” yet they are “expected to respond to a series of questions that will determine the rest of their lives.”

I reached out to CBP for an interview about how the agency is handling the asylum requests from Mexicans in Juárez but did not get a response.

On a recent Tuesday afternoon at the border camp, little kids ran around playing with a ball while teens huddled around a cellphone watching videos. The temperature was starting to drop; adults sat on the sidewalks looking bored and defeated. A woman dunked a loofah in a bucket with soapy water, struggling to get her toddler to stand still while she cleaned him up. Most of the Central Americans who lived here earlier in the year are now staying in one of the many shelters that have popped up throughout the city, including a large facility the Mexican government opened in the summer at the request of the United States to help non-Mexican migrants wait out their day in court.

The woman from Michoacán said that if she could’ve stayed in her hometown with her family she would’ve done so. But as I asked more questions about the life she fled back home, she started to avert her eyes and nervously rub her palms together. She explained that families like hers wished they didn’t have to sleep on the streets of Juárez—it’s embarrassing, she said.

“Who would want to live like this? It’s cold, and we go hungry sometimes,” she said. “People walk by sometimes—they call us lazy and dirty.” Her eyes filled with tears. Her oldest son, who’s still just seven, wrapped his arms around her and gently placed his head on her shoulder, trying to comfort her.