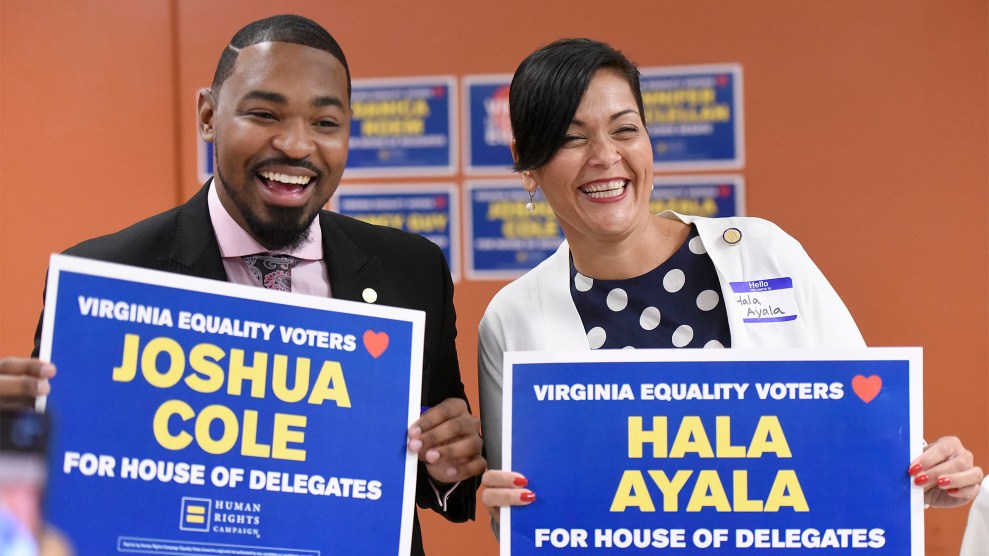 Joshua Cole, left, a candidate for the Virginia House of Delegates, and Delegate Hala Ayala, who is running for re-election, at a news conference in Richmond on August 15.Steve Ruark/AP

In November 2015, shortly before leaving office, Kentucky Gov. Steve Beshear, a Democrat, issued an executive order automatically restoring voting rights for roughly 140,000 people with past felony convictions who had completed their sentences for nonviolent crimes. Republican Matt Bevin, who supported restoring voting rights for ex-offenders while serving in the Kentucky senate, changed his mind after replacing Beshear as governor in December 2015 and rescinded his predecessor’s executive order. As a result, more than 300,000 people with felony convictions can’t vote in Kentucky—9 percent of the population, according to a 2016 study by the Sentencing Project, including more than one in four African Americans, making it the state with the highest black disenfranchisement rate.

Now Beshear’s son Andy, the state attorney general, is running against Bevin for governor in Tuesday’s election and promising to reinstate his father’s executive order. “Matt Bevin’s unnecessary voting restrictions make it harder for Kentuckians to be involved in our democratic process,” Beshear told the Louisville Courier Journal. “Unlike this governor, I want to lift up all of our families and believe we have a moral responsibility to protect and expand the right to vote.”

The Kentucky governor’s contest is one of a handful of state races on Tuesday that could have a major impact on voting rights by expanding access to the ballot or replacing gerrymandered maps drawn by Republicans.

Democrats have a shot to win governor’s races in three deep-red states this month. Polls show surprisingly close races in Tuesday’s elections in Kentucky and Mississippi, as well as the Louisiana contest on November 16. Democratic victories in any of these races would give the new governors the ability to veto redistricting maps that will be passed by the GOP-controlled state legislatures in those states in 2021, when states across the country draw new maps based on the 2020 census.

Democrats are also only a few seats away from reclaiming the state legislature in Virginia on Tuesday, which would give them control of a key battleground state for the first time in a quarter of a century. (The governor is a Democrat.) Virginia Democrats could pass new redistricting maps for the state legislative and congressional districts to replace the gerrymandered ones enacted by Republicans in the House of Delegates. A federal court struck down 11 state house districts in June 2018, finding that they were illegal racial gerrymanders, and a court-appointed expert redrew those districts to make them fairer. If Democrats take the majority, they could replace the entire statewide map—a move that could create a more representative legislature or that could turn a GOP-biased map into a Democratic-friendly one.

Another possibility: A Democratic majority in the state legislature could establish a bipartisan commission to redraw the state’s legislative and congressional maps, making Virginia the second-largest state after California to enact redistricting reform. Earlier this year, the GOP-led legislature approved a constitutional amendment to create an independent commission, but it must be approved by the legislature again next year and then by voters in a referendum to become law.

Democrats in Virginia could also enact a wide array of proposals for expanding access to the ballot. Virginia has some of the most restrictive voting laws in the country: It requires government-issued photo ID to vote; voters must have an excuse for why they won’t be present on Election Day in order to vote early or obtain an absentee ballot; and the governor can restore voting rights for people with past felony convictions only on a case-by-case basis. If Democrats win control of the state legislature, they could repeal the voter ID law and pass reforms including automatic restoration of voting rights for ex-offenders, no-excuse early and absentee voting, Election Day registration, and automatic registration—joining a nationwide trend of Democrats in blue states aggressively expanding the right to vote. These bills have already been introduced by Democrats in the legislature, but Republicans have blocked the initiatives.

The state races in 2019 have huge stakes for the future of democracy, even though they have been overshadowed by the impeachment inquiry and the 2020 presidential election. “The presidential election is of existential importance, but these state races are, if not existential in their importance, more important than any state races have perhaps ever been,” former Attorney General Eric Holder, who’s leading a group seeking to reverse Republican gerrymandering efforts, said at an event organized by Mother Jones last month. “I can’t imagine what this country will look like if we have 20 years of gerrymandered Republican control and we try to dislodge it in 2031 instead of 2021.”