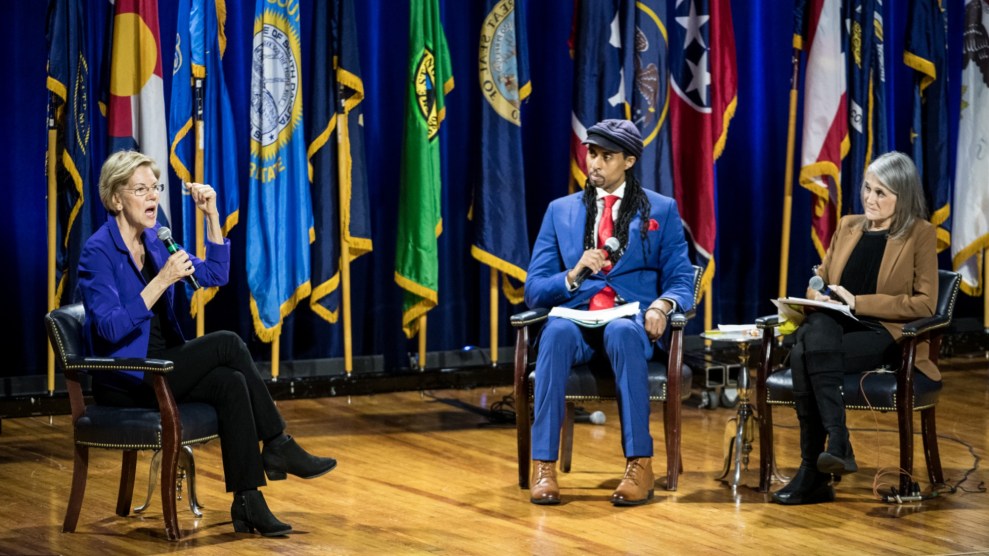 Only six candidates turned out for the first ever presidential forum on environmental justice at South Carolina State University on Friday night.

Warren, who launched an ambitious climate and environmental justice plan last month, said a third of the $3tn she has pledged to spend combating global heating over the next decade would be ring fenced for communities devastated by generations of environmental racism.

She pledged to tackle big corporations including big polluters by introducing anti-corruption legislation on her first day as president.

Asked about Facebook chief executive Mark Zuckerberg’s recently leaked comment that a Warren presidency would “suck” for the company, she responded: “Boo-hoo.”

Steyer, the hedge-fund manager turned environmental philanthropist who bankrolled an “impeach Trump” ad campaign, said he would declare a state of emergency on his first day in office to tackle the climate crisis.

He compared current environmental inequalities to Jim Crow segregation laws implemented after the abolition of slavery, when people of color and native Americans had inadequate and inferior public services.

“If we’re going to repair these injustices, the people affected have to be at the front of the line for green jobs,” said Steyer.

The Flint water scandal in 2014 propelled environmental inequalities on to the national stage. Since then, it has emerged that thousands of water sources in communities across the US are contaminated with lead. This includes Newark, New Jersey, where Booker was mayor. He pledged to fund a national programme to replace lead pipes.

The New Jersey senator, who founded the first environmental justice caucus, is vegan, because of what he says to the cruel and polluting “corporate animal industry” responsible for massive greenhouse gas emissions and health problems in nearby communities.

Booker defended supporting nuclear power, a position criticized by environmental justice groups given the health risks posed by nuclear waste, arguing that it was the only way to meet climate targets within 12 years.

“Fifty percent of our non-carbon energy producing capacity come from nuclear,” he said. “So I’m a realist.”

Delaney, a former congressman from Maryland, said cutting carbon emissions to net zero by 2050 would be impossible under the Green New Deal, a broad social and economic pact supported by high-profile Democrats such as Alexandria Ocasio-Cortez. The deal plans legislation to achieve universal healthcare and higher minimum wages as well as clean energy, sustainable infrastructure and green jobs.

Delaney said he wants to cancel fossil-fuel tax subsidies, freeing up money to invest in technology to sequester carbon dioxide from the atmosphere.

The environmental justice forum was hosted by the National Black Caucus of State Legislators and leaders from frontline and tribal communities, civil rights, youth and environmental organizations.

It was moderated by Mustafa Santiago Ali, a former Environmental Protection Agency official, and Amy Goodman from the independent news organization Democracy Now.

The caucus will host a forum on gun violence and mental health next month.