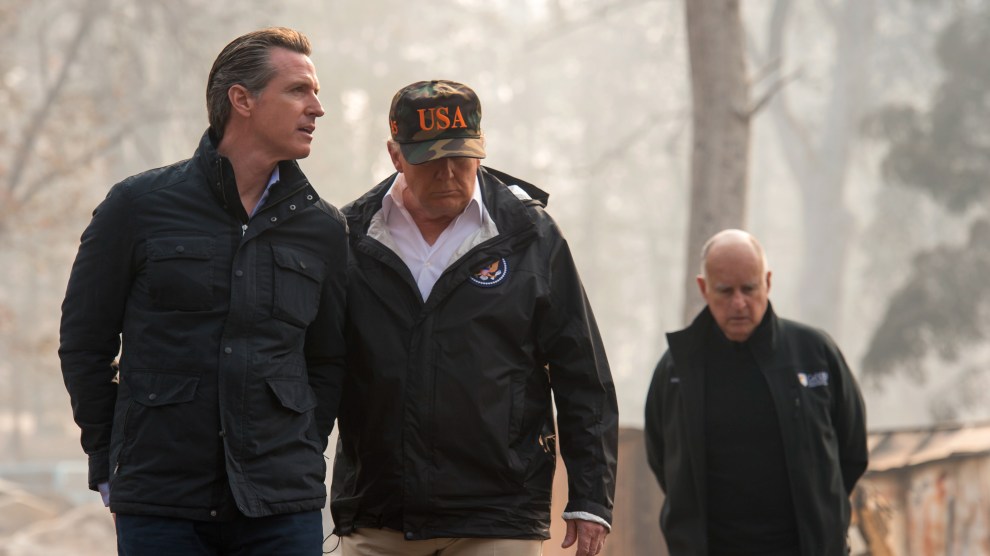 President Donald Trump just threatened to cut off federal funding to California over Gov. Gavin Newsom’s “forest management,” which the president blamed for the wildfires that have ripped through wide swaths of the state over the past few weeks. “I told him from the first day we met that he must ‘clean’ his forest floors,” Trump tweeted bright and early on Sunday morning. “Must also do burns and cut fire stoppers.”

“Every year, as the fire’s [sic] rage & California burns, it is the same thing- and then he comes to the Federal Government for $$$ help. No more.”

The Governor of California, @GavinNewsom, has done a terrible job of forest management. I told him from the first day we met that he must “clean” his forest floors regardless of what his bosses, the environmentalists, DEMAND of him. Must also do burns and cut fire stoppers…..

….putting these massive, and many, fires out. Great firefighters! Also, open up the ridiculously closed water lanes coming down from the North. Don’t pour it out into the Pacific Ocean. Should be done immediately. California desperately needs water, and you can have it now!

Nevermind that only about 2 percent of California forests are managed by the state government, compared to the 57 percent of California forests run by the federal government, according to a report from the state’s Legislative Analyst’s Office. As the Los Angeles Times pointed out this morning, none of the fires that hit Southern California last week were even forest fires. Here’s their list of how the fires got started and the urban, suburban, and mountainous areas that burned:

–The most destructive fire broke out in the heart of Los Angeles’ Westside, starting just off the 405 Freeway near the Getty Center and burning 12 homes in Brentwood.

–The Easy fire, which threatened the Ronald Reagan Presidential Library, occurred in a suburban area dotted by subdivisions and open spaces in Ventura County.

–The Maria fire burned on a mountain amid citrus and avocado groves between Santa Paula and Somis.

–The 46 fire occurred in a riverbed in Riverside County, the result of a car crash at the end of a high-speed police pursuit. The fire leaped from the riverbed to a nearby shipping container manufacturer.

–The Hillside fire did begin at the edge of the San Bernardino National Forest. But it quickly burned downhill into a San Bernardino neighborhood, which is where the fire fight occurred. It ended up burning just 200 acres but destroyed several homes.

Baseless as it may be, Trump’s threat to pull federal funding from California is hardly a new tactic. Last November, after more than 80 people died in the devastating Camp Fire, he did the same thing. “Remedy now, or no more Fed payments!” he threatened, claiming “gross mismanagement of the forests” was to blame. The office of then-Gov. Jerry Brown fired back, calling the president’s comments “inane and uninformed.” (And just as he is now, back then he was also confused over California’s water policy.)

This morning Newsom expressed the same disdain for Trump’s comments. “You don’t believe in climate change,” he tweeted in response to the president. “You are excused from this conversation.”

You don’t believe in climate change. You are excused from this conversation. https://t.co/PSt8N39Er5