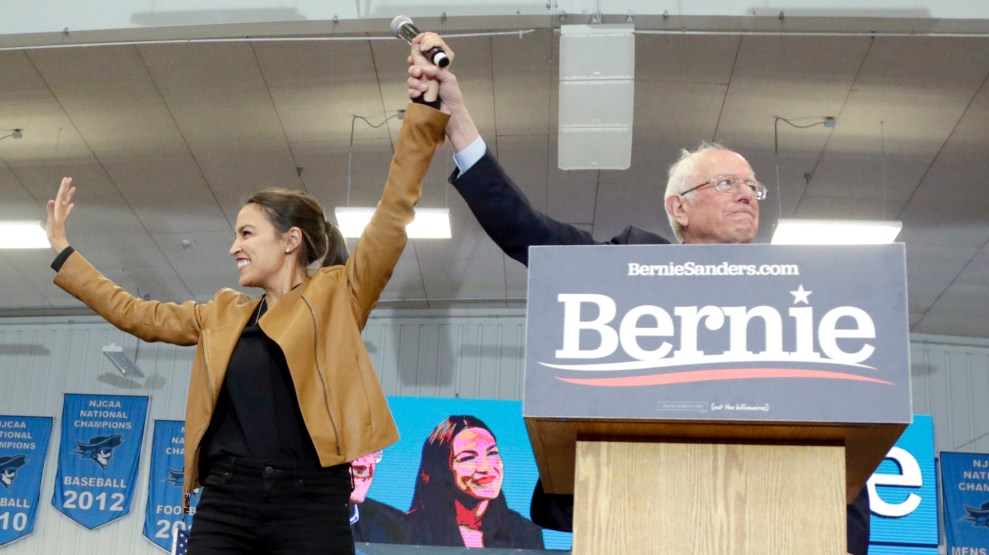 Alexandria Ocasio-Cortez was welcomed to Iowa with a roast. On Friday, while the first-term Democratic congresswoman from New York was introducing Vermont Sen. Bernie Sanders at a rally in Council Bluffs, the state’s Republican bigwigs took their shots at the Lincoln–Reagan Dinner at a Marriott ballroom in downtown Des Moines.

“Doctor Ocasio-Cortez,” state GOP chairman Jeff Kaufmann announced, would be in town the next day with “Crazy Bernie.” “She’s got a problem with our cows here!” he said, referring to the Green New Deal she and Sanders had come to Iowa to talk about.

Joni Ernst, the state’s Republican junior senator, brought up the pair again, and again the audience booed. “We know what kind of reception they’re gonna get!”

Did we? At three stops over two days, Ocasio-Cortez was greeted with only a smattering of protests—I saw four people with weird signs on Saturday making fun of her for being a bartender—and large crowds in Council Bluffs, Des Moines, and Coralville. These were her first appearances with Sanders since she endorsed him in Queens last month. Technically, she was here in the first-in-the-nation caucus state to talk up the Green New Deal, the sweeping economic and environmental overhaul she introduced in Congress to combat climate change, now a major plank in the Sanders platform. But more than that, she was here as a sort of proof of concept—living, breathing evidence that the political revolution Sanders had promised wasn’t just happening but evolving.

The centerpiece of Ocasio-Cortez’s visit was a three-hour long climate summit at Drake University on Saturday. People heard from speakers such as Zina Precht-Rodriguez, an organizer at the Sunrise Movement, and the writer and activist Naomi Klein. Panelists discussed chicken farming and water quality and renewable energy while sitting in front of big watercolor panels painted by the artist Molly Crabapple—workers in orange vests putting up solar panels, workers in orange vests working on wind turbines, workers in orange vests…farming, maybe? I could go on about the content of the thing, but the content wasn’t what was revelatory; what was remarkable was the fact that it was happening at all.

“Four years ago when I was running around Iowa and New Hampshire and going all over this country, I talked about climate change, and people nodded their heads and I said, yeah, it’s a serious problem,” Sanders told the crowd in Des Moines. “I was on a national debate [and] a moderator said, ‘What do you think is the great national security crisis facing this country?’ And I said climate change. People kind of didn’t fully appreciate that answer. But the point is that over the last four years, as I go around the country today, people do understand.”

This is a meaningful shift in the United States, driven in large part by a revitalized activist movement. But it’s also a shift in how Sanders approached the issue. Four years ago, Sanders wasn’t avoiding the issue of climate change. (He was talking up “fossil fuel billionaires,” and pushing a climate agenda of his own.) But he wasn’t running on it quite like this, with three-hour summits where people who aren’t running for any office at all talked about the poultry industry, and corporate consolidation of pig-farming, and electrification of freight rail. He wasn’t doing a full weekend of events on the theme, in a state where corn and beef are king. No, this was something new, because in the time since the last campaign ended and this one began, the kinds of idealistic young lefty activists his campaign had counted on in 2016 had latched onto something else entirely and built it into a new organizing force.

And it was being shepherded, to a large degree, by the woman on stage with him—a former campaign organizer who’d protested at Standing Rock, then went and ran for Congress, and then almost immediately introduced the Green New Deal. She is Sanders’ most powerful surrogate in 2020 precisely because her career is the story the movement wants to believe about itself.

Ocasio-Cortez also just happens to be uncommonly good at this, adept at inverting the arguments that have traditionally been wielded against people with politics like hers. “When it comes to a Green New Deal people say—always, always, always with this question of ‘how are you going to pay for it?’” she said. “As if we’re not paying for it now.” She rattled off a list of recent, headline-grabbing shocks—the California wildfires, Hurricane Maria, decreasing crop yields.

“Coal miners are being denied their pensions while coal barons are being bailed out by the federal government,” she said. The message of Bernie 2020 is that you’re already paying for it.

Later that day, Ocasio-Cortez and Sanders spoke to a crowd of a few thousand at a field house in Coralville, near the University of Iowa campus. Sanders gear was in abundance, but he wasn’t the main draw for everyone. Caleigh Stanier, a high school junior, told me she came for Ocasio-Cortez, not Sanders.

“I admire her charisma,” she said. She’d watched the congresswoman’s Netflix documentary, Break Down the House, and seen some of her stuff on YouTube. She was drawn to a young female politician with the “boldness” to push a program like the Green New Deal.

Ditto for Jordan Mehling. Though she’ll be supporting Sanders for the second time next year, Ocasio-Cortez was the impetus to make the trip down from Minnesota. Watching the young Democratic Socialist challenge Washington political types had been an inspiration. “Before AOC came into my view, I cared about these things and I liked Bernie because he was standing up for these things that I also believed in, but”—but—”She’s the one who sort of made me feel if she can do it why can’t I do something as well?” Here was someone her doing the maximum. “I can at least be doing the minimum.”

Jessica Hillman, who had driven out from Chicago to see Sanders and Ocasio-Cortez, saw the congresswoman as something like a generational bat signal.

“We all wanted to do something meaningful, we all wanted change, but we didn’t feel like we had any power,” she said. “We couldn’t connect with other people and then when she came out it was almost like a message that was sent out that connected us all together.”

I saw a little girl jumping up and down as Ocasio-Cortez began to talk, and two young women rush into the crowd to get closer. Afterward, supporters flocked to the far side of the hall for handshakes and selfies. I came upon a University of Iowa student named Harry Manaligod excitedly telling a group of friends about shaking the congresswoman’s hand.

“I came for Ocasio-Cortez,” Manaligod told me. “She’s like a completely different league. I feel like there’s so many politicians that have made sacrifices to achieve their goals, and I feel like she’s not the kind of person that’s gonna let one thing fall to the wayside to get her goals accomplished.”

Further down the line, a grown man walked away grinning. “I can’t wash my hand now!” he shouted.

Sanders’ core identity is that he’s a man who doesn’t change—Ocasio-Cortez told the crowd Saturday night that she endorsed him because he had been fighting for people like her before she was born. The consistency is the thing; you hear it again and again. So much so that there is a frustration among supporters that other candidates have profited at his expense by simply appropriating aspects of his agenda.

But if this campaign turns out different from the last, it’ll be because of the subtle ways he and his movement have evolved. In 2016, Sanders was traveling around the country, promising a new day in America that you could only faintly begin to discern. In 2020, the revolution he promised isn’t quite so hard to imagine—she takes the stage right before him. That’s its own form of renewable energy.