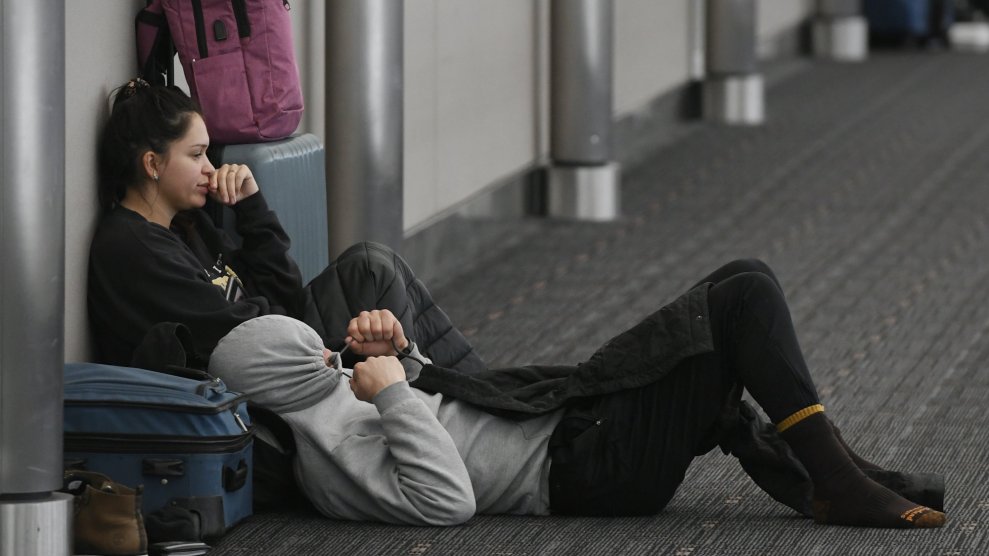 Traditionally, the Wednesday before Thanksgiving has been one of the busiest holiday travel days of the year. This week, 55 million Americans are expected to use planes, trains, cars, and buses to get to their loved ones by Thursday. But a combination of blizzards, severe wind, traffic, and a major protest at a major airport has made getting home a herculean effort. Okay, a nightmare.

At the Los Angeles International Airport, several hundred American Airline workers began their a protest for higher wages on Century Boulevard, just beyond the entrance ramp for the airport. The protest began on Tuesday evening and ended later that day with 16 arrests.

DEVELOPING: Airport workers gathering to protest on one of the busiest travel days of the year. They’re “calling on American Airlines to ensure that workers who cater its flights can afford to access medical care and raise their families in Los Angeles.” @CBSLA pic.twitter.com/t888Z88h3h

The protest caused such a large traffic jam that an ABC affiliate in Los Angeles reported that passengers were leaving their rideshare cars to walk to the airport. “I walked two miles from my Uber,” one woman told ABC. “We were siting for 30 minutes without moving so I just walked.”

More than 1,000 miles away in Denver, passengers didn’t have the option of walking to their destinations. After more than a foot of snow fell in the area on Tuesday, 1,100 people were forced to spend the night at Denver International Airport.

That flight to #honolulu is lookin’ pretty good right about now!! It’s one of the few on the board that is listed ‘on time’ at #DEN pic.twitter.com/BaQCppm2Ez

Alex Renteria, a spokeswoman for the airport, said 484 flights were canceled and another 508 were delayed.

This looks fun. DIA saying the TSA line is taking about 30 minutes. Most flights going out tonight are on time… so far. We will be here all night giving you updates for your holiday travel. @DenverChannel pic.twitter.com/72AaPect3w

But it’s not just airline travelers who are being inconvenienced by the weather. A powerful winter storm swept through the midwest, causing impossible travel conditions for the residents of Minnesota and others in the region.

It looks like a giant snow globe in downtown #Minneapolis this morning with winds gusting ~40 MPH. The #snow winds down this AM (another inch) but a 2nd storm arrives Fri -Sat. We're live on @weatherchannel #snowstorm @NWSTwinCities pic.twitter.com/PRFVWcPb3I

Even Smokey the Bear might be affected by the weather. Each year at the Macy’s Thanksgiving Day Parade, the bear and other iconic characters including Snoopy, SpongeBob, and Bart Simpson soar above the crowds who gather on the 2.5-mile route in New York City. But, the National Weather Service is predicting winds up to 26 miles per hour for Thanksgiving Day, meaning that balloons of a certain size may have to be grounded. After a woman was critically injured by a Cat in the Hat balloon in 1997, the city implemented new rules: If the winds exceed 23 miles per hour, no big balloons can fly.