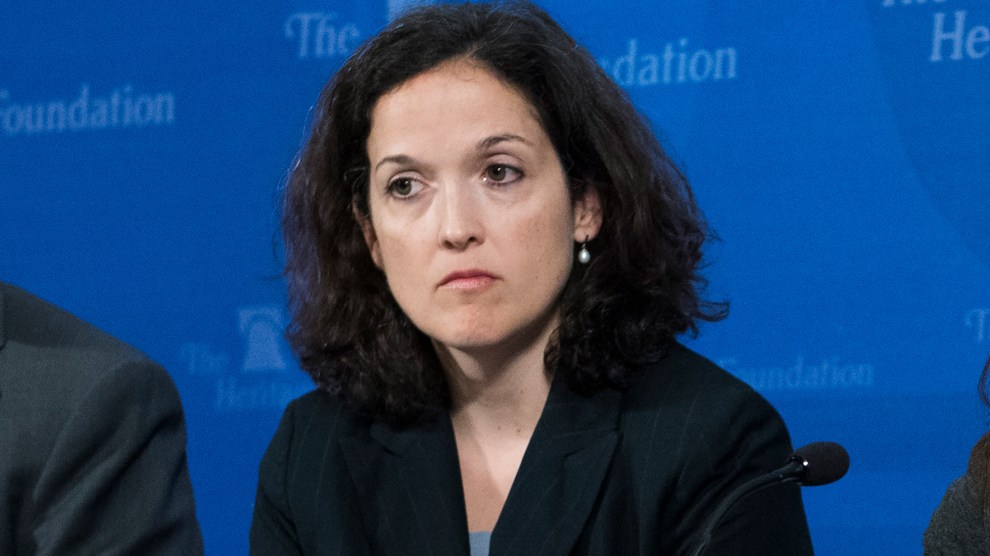 Senate Republicans voted Wednesday to confirm Sarah Pitlyk, who has argued against in vitro fertilization and surrogacy and touted the (debunked) “eugenic origins of the birth control movement,” to a lifetime judgeship on the U.S. District Court for the Eastern District of Missouri. On Tuesday, Sen. Susan Collins was the only Republican to vote against Pitlyk’s nomination; all Democrats voted no as well.

The American Bar Association unanimously determined Pitlyk was “not qualified” for the judgeship due to trial and litigation experience in September, yet the Senate Judiciary Committee moved forward anyway, continuing a pattern of selecting young, controversial, and under-qualified judges. The 42-year-old lawyer serves as special counsel for the Thomas More Society, a conservative anti-choice law firm that represented David Daleiden, the anti-abortion activist who faced charges after a failed sting operation in which he offered to buy fetal tissue from Planned Parenthood and doctored videos to make it look like the organization trafficked in “baby parts.” In Pitlyk’s bio on the firm’s website, she highlights her work on “a team defending undercover journalists against civil lawsuits and criminal charges resulting from an investigation of illegal fetal tissue trafficking.” (She also touts work against “St. Louis’s unconstitutional ‘abortion sanctuary city’ ordinance,” which was intended to bar discrimination based on pregnancy and reproductive health choices.)

Pitlyk clerked for Supreme Court Justice Brett Kavanaugh, and wrote an opinion piece for Fox News defending him against the sexual assault allegations he faced during his confirmation process. Many reproductive rights advocates have expressed fear that the administration is appointing anti-choice federal judges as a long-term effort to restrict abortion access nationwide and challenge Roe v. Wade through the court system.

Pitlyk has made a career out of anti-abortion and reproductive health litigation. She’s argued in support of severe abortion restrictions, including Iowa’s six-week ban (which was ruled unconstitutional). In a 2017 amicus brief against the protection of access to fertility treatments and technology, Pitlyk wrote “that surrogacy poses serious medical risks to both the pregnant women and the children they carry” and that “the practice of surrogacy has grave effects on society, such as diminished respect for motherhood and the unique mother-child bond; exploitation of women; commodification of gestation and of children themselves; and weakening of appropriate social mores against eugenic abortion.” And as the Huffington Post noted, she told the National Catholic Register the same year that “surrogacy is harmful to mothers and children, so it’s a practice society should not be enforcing.” She doesn’t appear to have a solid grasp on reproductive health science; in 2015, she wrote that it is a “scientific fact” that “human life begins at the moment when a human sperm fertilizes a human egg.”