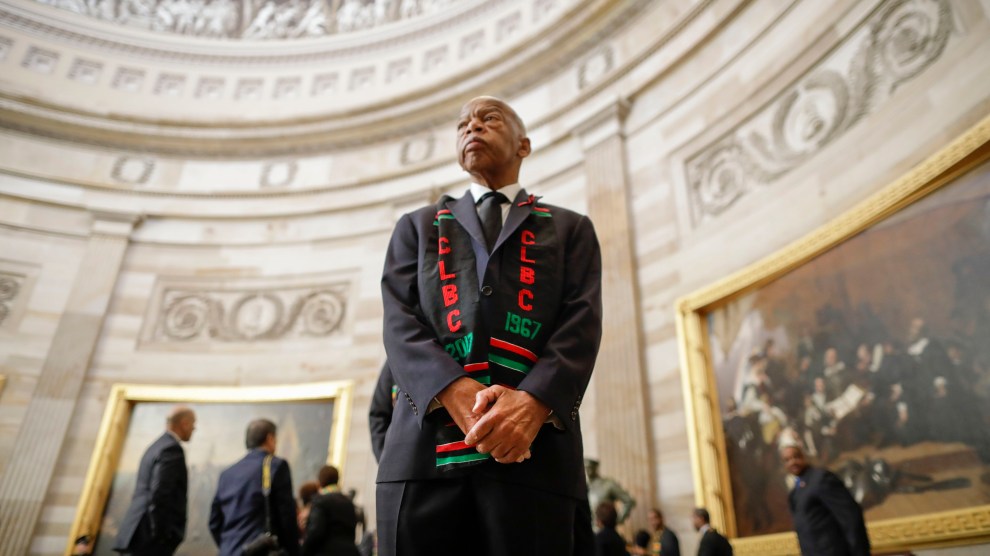 Rep. John Lewis and other members of the Congressional Black Caucus wait to enter the memorial services for Rep. Elijah Cummings at the US Capitol in October. Pablo Martinez Monsivais, Pool/AP

Rep. John Lewis, the longtime civil rights leader and congressman from Georgia’s 5th District, announced Sunday that he has been diagnosed with advanced pancreatic cancer, one of the deadliest cancers in the country. He plans to undergo treatment in Washington, DC, where he will continue to work.

“I have been in some kind of fight—for freedom, equality, basic human rights—for nearly my entire life,” Lewis, 79, who helped organize the 1963 March on Washington and other civil rights protests, said in a statement. “I have never faced a fight quite like the one I have now.”

“I have never faced a fight quite like the one I have now.”

Lewis was diagnosed by doctors during a routine medical visit earlier this month. His faces stage 4 cancer, the disease’s most advanced stage. About three-quarters of people diagnosed with pancreatic cancer die within a year, but Lewis said doctors told him that medical advances would give him a “fighting chance.”

Democratic colleagues in Washington and former President Barack Obama said they were rooting for the longtime congressman, who has served in the House of Representatives since 1987. “If there’s one thing I love” about Lewis, Obama tweeted, “it’s his incomparable will to fight. I know he’s got a lot more of that left in him. Praying for you, my friend.”

John Lewis is one of the greatest agents of change in American history—I wouldn't be a US Senator if it weren't for the chain of protest unleashed by his act of protest on an Alabama bridge.

Holding him in my heart as he battles cancer. Keep fighting, keep making good trouble ✊🏾 https://t.co/bjY03Bwf8T

Born the son of sharecroppers in Alabama, Lewis was a key organizer during the Civil Rights Movement to end racial segregation, and he was arrested and jailed dozens of times during the 1960s for his activism. In addition to joining the Freedom Rides and lunch counter protests, he was one of the “Big Six” leaders who organized the historic March on Washington, where Martin Luther King Jr. gave his “I Have a Dream” speech, and he walked two years later in the Bloody Sunday march in Selma, Alabama.

During a commemoration of the Selma march last year, Lewis met a 10-year-old boy who traveled seven hours from Tennessee to see him. “It showed me that it doesn’t matter what your age is, how old you are, you can still be active in standing up for what you’re supposed to be for,” the boy said after Lewis embraced him and invited him to tag along for the commemorative walk.

An epic photo.
We’re in your corner,
Congressman #JohnLewis. pic.twitter.com/Bmq6sgkfNe

Lewis has remained a strong moral compass for the Democrats in Congress during his years in Washington. In 2016, after a mass shooting at the Pulse night club in Orlando, he staged a sit-in on the House floor to demand a vote on a gun control bill. After Donald Trump was elected, he refused to attend the inauguration ceremony.

And this month, he gave an emotional speech urging Democrats to impeach the president over the Ukraine scandal. “There comes a time when you have to be moved by the spirit of history to take action to protect and preserve the integrity of our nation,” he said.

On Sunday, Lewis said in his statement that he is “clear-eyed about the prognosis,” but determined to “do what I have always done: I am going to fight it and keep fighting for the Beloved Community.”

“I may miss a few votes during this period, but with God’s grace I will be back on the front lines soon,” he added. “Please keep me in your prayers as I begin this journey.”