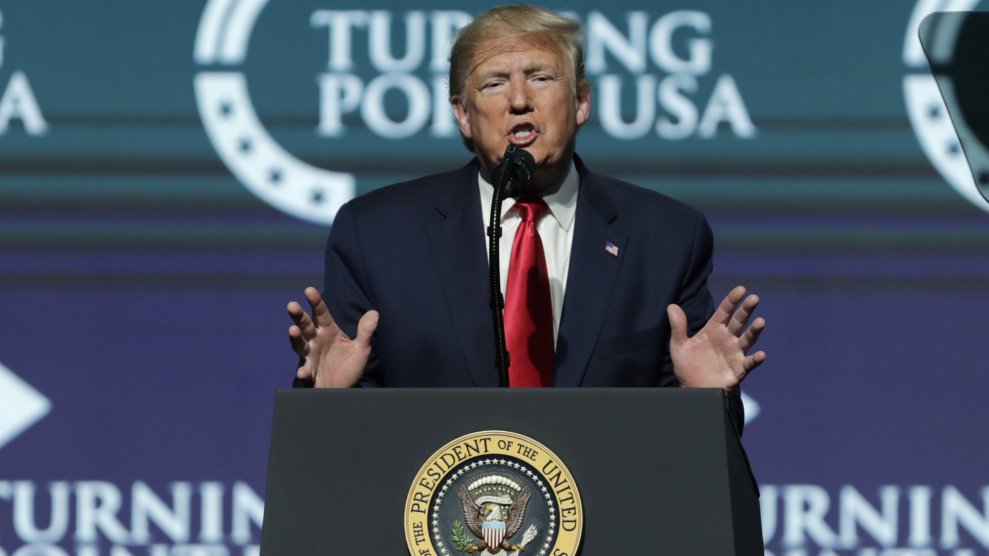 Days after being impeached, Donald Trump is feuding with the wind again. While speaking at a summit for conservative students in Palm Beach, Florida, the president railed against windmills.

“I never understood wind,” Trump said to the crowd at the Turning Point USA Student Action Summit. “I know windmills very much, I have studied it better than anybody.”

The majority of his comments were hard to follow. “I know it is very expensive,” he continued. “They are made in China and Germany mostly, very few made here, almost none, but they are manufactured, tremendous—if you are into this—tremendous fumes and gases are spewing into the atmosphere. You know we have a world, right?”

He went on to say that windmills are killing birds at an epidemic rate. “You want to see a bird graveyard, go under a windmill someday,” the president continued. “You will see more dead birds than you’ve ever seen in your life.” It’s true that windmills can kill birds. Scientists say windmills kill between 214,000 and 364,000 birds each year—a minuscule number compared to the 6.8 million bird deaths caused by communications towers.

It’s not the first time to president has railed against windmills. In April, Trump claimed the noise from wind turbines caused cancer. Last August, at a rally in Pennsylvania, the president claimed that when the wind stops blowing, households powered by wind energy would go dark. “Your wives and husbands say, ‘Darling, I want to watch Donald Trump on television tonight,'” he said at that rally. “‘But the wind stopped blowing and I can’t watch.'” There is no evidence for these claims.

This article has been updated to correct a citation on bird deaths caused by telecommunications towers.