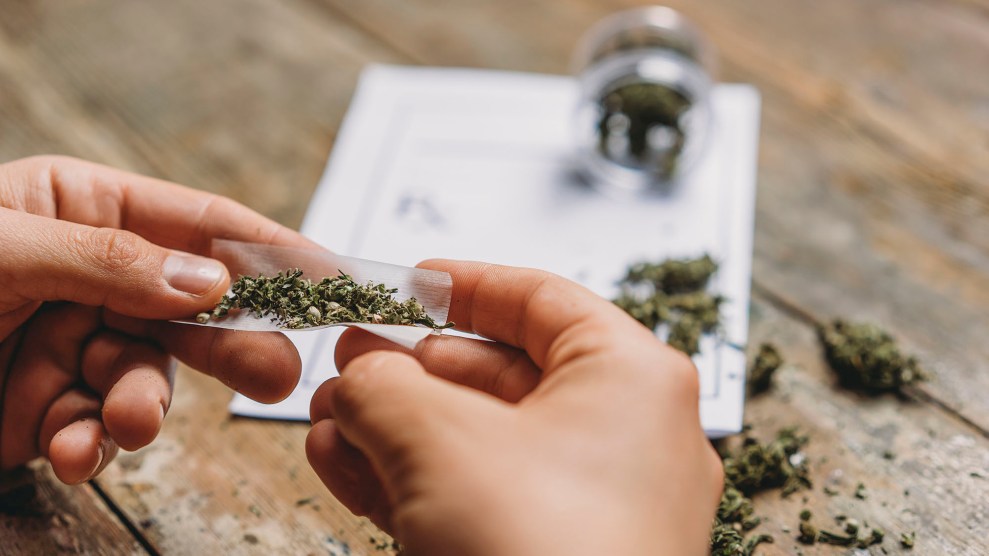 As Congress rushes to pass comprehensive spending legislation this week to avert a government shutdown, Democrats are giving up residents of the nation’s capital as part of the deal.

On Monday, Democrats and Republicans unveiled the $1.3 trillion spending bills that will keep the government funded through next year. The compromise package includes a pair of provisions that House Democrats had initially removed, both of which strike against DC “home rule” by barring the local government from spending its own money how it wishes. As a result of the compromise, the DC government will continue to be barred from helping low-income women pay for abortions and setting up up a legal market for marijuana sales.

DC residents lack real representation in Congress, with no senators and one nonvoting delegate in the House. Congress also has the ability to overrule legislation passed by the District government—a power it lacks for any state or other locality.

That disenfranchises a lot of American citizens. With more than 700,000 residents, DC has a larger population than Vermont and Wyoming, and it is just a little smaller than Alaska. Imagine how much of a tirade about the overreach of the federal government Sen. Mike Enzi (R-Wyo.) would unleash if Congress passed a measure specifically naming Wyoming in a prohibition on how his home state can spend its funds. (If DC won its long-sought statehood, it would be the state with the highest share of residents of color, with a population that is 46 percent Black and 11 percent Hispanic.)

Over the past few years, a wave of states have ditched war-on-drugs policies, instead treating marijuana more like alcohol than like more serious drugs such as heroin. To date, 11 states have legalized recreational use of weed, and many of those have a retail system that allows adults to walk into a store and buy joints or edibles just like they’d buy a six-pack.

In 2014, Initiative 71 passed with support from 70 percent of DC voters. The ballot measure legalized possession of marijuana and allowed limited home growth for personal use. The widespread understanding in DC was that the initiative was just the initial push, to be followed by regulations from the DC Council to allow a legal market for production and sales. Instead, the Republican majority in Congress balked at DC home rule and included a rider in spending bills prohibiting the District from setting up any system to legalize marijuana. That language has been included in each subsequent spending bill, including the one released Monday.

When Democrats took control of the US House earlier this year, local activists were hopeful that the rider would disappear. In May, DC Mayor Muriel Bowser introduced a bill to allow legal sales. “We want to be able to regulate,” she told the Washington Post at the time, “we want to be able to make sure we are collecting our fair share in taxes, we want to invest those taxes in ways that affect communities that have been disproportionately affected, and we want to train and hire DC residents.” She had reason for optimism, since the Democratic House initially ditched the prohibition rider in its spending bill earlier this year. But it didn’t survive negotiations with the Republican Senate.

As a result, the District is left with a strange hybrid system. Local police no longer arrest people for possession of small quantities of marijuana. But the city still considers distribution a crime, setting up a confusing gray market of sellers offering various wares—t-shirts, artworks—that come with a “gift” of marijuana. Anyone caught selling marijuana can still be arrested.

And the number of arrests has begun ticking up, after plummeting following the passage of Initiative 71. African Americans are arrested disproportionately. In 2017, 926 people were arrested for distribution, illegal possession, or public consumption, and 91 percent of them were black. (Late last year, the District announced a new policy to stop arresting people for smoking in public, instead now just writing a citation).

“At a time when a record number of Americans support ending our failed prohibition on marijuana, it is incredibly disappointing to see that Congress continues to ignore the will of their constituents on this important issue,” Erik Altieri, executive director of the National Association for the Reform of Marijuana Laws, said in a statement about the spending bill, which also lost other provisions the group had supported in the initial Democratic plan, including changes to drug testing of federal employees. “Supporters of legalization are engaged voters and we shouldn’t be treated as a bargaining chip in spending negotiations when justice and liberty are at stake.”