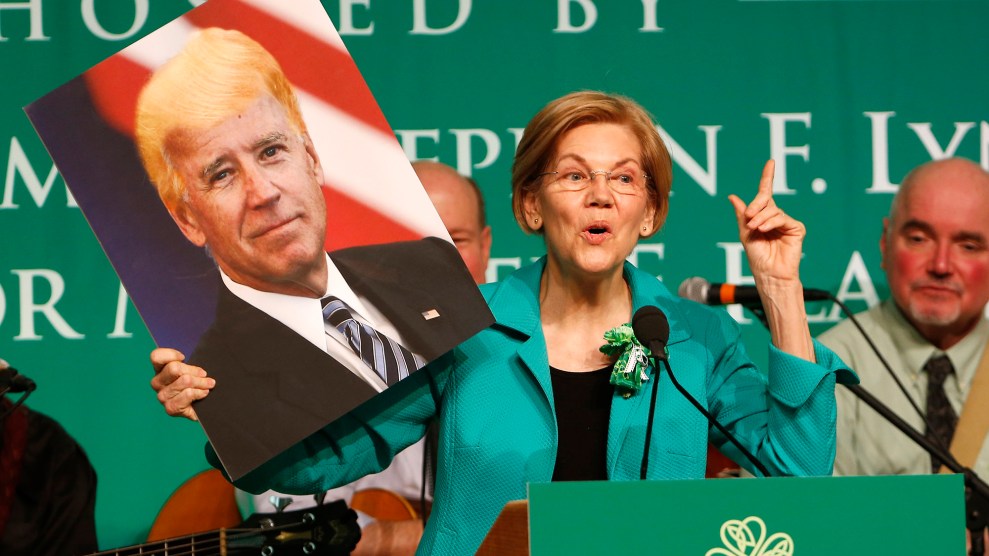 On Tuesday, Sen. Elizabeth Warren (D-Mass.) released a plan to “fight global financial corruption” and regulate Delaware-based LLCs—perhaps a sly dig at former Vice President Joe Biden, who as a senator cast key votes favorable to his home state’s corporate denizens, and with whom Warren has clashed in the past over issues such as bankruptcy reform.

In Delaware, which Biden represented for six terms in the Senate, it can be easier to establish a shell company than to get a library card, Warren’s plan notes. To fix the problem, Warren vows to close Delaware loopholes that allow companies to avoid disclosing their owners’ identities. Her plan also says that she will expand enforcement against financial institutions and limit the flow of dark money in the United States.

As Mother Jones’ Tim Murphy reported recently, Biden played a role in deregulating the nation’s banking system, and his backing for the big banks and credit card companies that call Delaware home led to a clash with Warren when she appeared as a witness during a 2005 hearing on a bankruptcy reform legislation:

Credit card companies wanted to limit the options of people filing for personal bankruptcy, but that was only one part of the equation. Delaware also had a lot riding on helping corporations file for bankruptcy. For a variety of reasons, including its high concentration of white-collar lawyers and the pro-business reputation of its courts, the state was the venue for a large percentage of the nation’s Chapter 11 cases. It had even come up with a special fast-tracked bankruptcy process. Filing in Delaware allowed companies that were functionally based elsewhere to “escape the obligation to make the process open,” as Warren put it.

Bankruptcy cases made huge gobs of money for Delaware’s legal industry. When reformers introduced language that would force companies to file for bankruptcy in the states where they were actually based—a clause dubbed “the Delaware killer”—Biden used his leverage to defeat it. Ultimately, Biden ended up securing funding for four more bankruptcy judges in Delaware.

Warren’s criticism of Biden came to a head at a Capitol Hill hearing in 2005, when they sparred over the bankruptcy bill for 15 minutes. Biden appeared exasperated with the expert witness sitting across from him. He found it “outrageous” that she would question the openness of Delaware’s bankruptcy court to small creditors, and he insisted that Warren was aiming at the wrong target. Her focus should be on big structural issues like health care and lending practices, he insisted, rather than the particulars of the bill he was pushing.

Over time, Biden’s exertions on the bankruptcy bill began to shape his national reputation. “His energetic work on behalf of the credit card companies has earned him the affection of the banking industry and protected him from any well-funded challengers for his Senate seat,” Warren wrote in the Harvard Women’s Law Journal. “This important part of Senator Biden’s legislative work also appears to be missing from his Web site and publicity releases.”