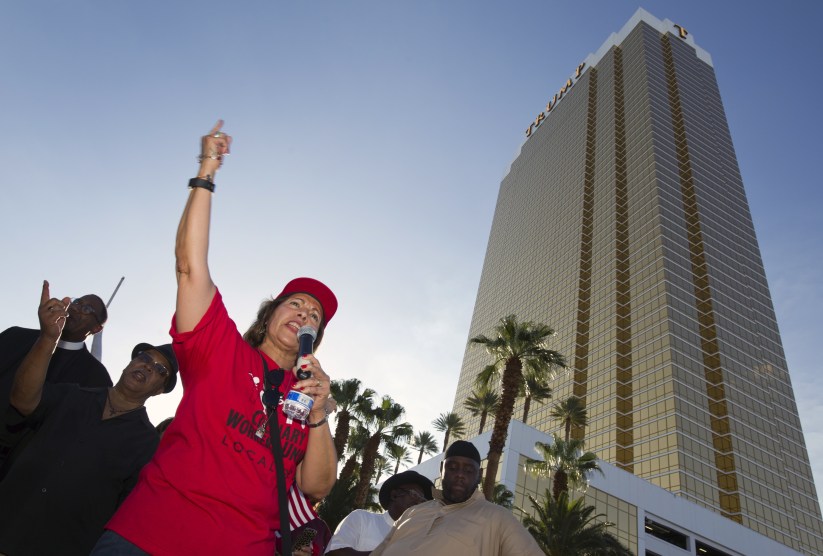 Housekeepers, cooks and bartenders rally outside Donald Trump's hotel to draw attention to their efforts to unionize workers at the property just off the Las Vegas Strip.Steve Marcus/AP

Employers will pay a lot to ensure they don’t have to actually pay the people who work for them.

This morning, the Economic Policy Institute dropped a report showing that in more than 40 percent of union election campaigns, employers are charged with violating laws. This includes employers threatening, firing, disciplining, or retaliating against workers trying to form a union—actions that occur “routinely,” writes Celine McNicholas, a co-author, in a statement.

The report also shed a light on a growing but still fairly obscure element of the union-busting playbook: spending millions on consultants for “union avoidance.”

Three quarters of employers involved in union elections, by one estimate, hire anti-union consultants. These firms include IRI Consultants, recently hired by Google, and the anodyne-sounding Labor Relations Institute, which the report says is one of the nation’s largest union-avoidance firms. Go check out their white papers. One asks “What Can Your Business Learn from the Iraq War?” It offers strategies from the invasion of Iraq to “be ready to use in case you are targeted by union organizers.” Sure, it notes, you can take the comparison too far, but “there are similarities in the underlying strategies of a guerilla insurgency and a union organizing campaign.”

The report estimates that companies spend $340 million a year on anti-union consultants, some of whom charge $350-plus hourly rates or $2,500-plus daily rates. The total figure is based on the LM-20 and LM-21 forms filed with the federal government that track consultant rates on projects and yearly contracts. Noting that these disclosures have been shown to represent only about 7.4 percent of the industry, researchers extrapolated from this data. But the $340 million could be an underestimate. In 2016, the Department of Labor announced a loosened requirement for filing LM-21s. The next year, the report notes, there was a 38 percent drop in LM-21s.

The report highlights a few employers that have spent money on union avoidance, among them Trump International Hotel Las Vegas.

Check out the full report here.