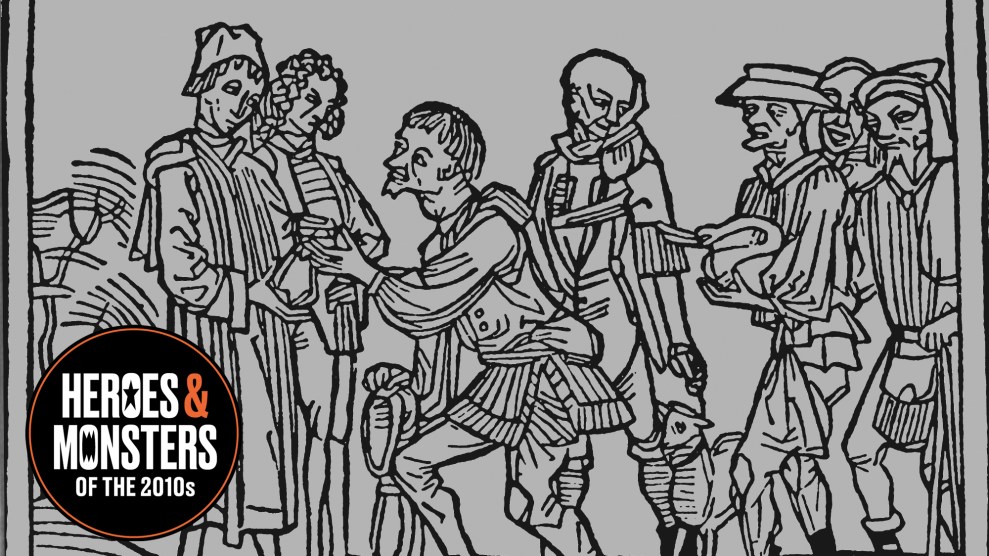 Landlords. Where do you start?

Do you start with the property company evicting two unhoused mothers and their kids for moving into a home that the “distressed” housing brokers preferred empty, for getting in the way of two-bit deposit scams that ripped off the people who could least afford it, for restoring one piece of the neighborhood to life, for keeping a few white Richie Riches from getting richer?

Do you start with the bankers who got the decade rolling by fast-talking buyers they called “mud people” into taking “ghetto loans,” buyers who thought they’d escaped lifetime tenancy only to find their new landlord was Wells Fargo, and Wells Fargo was meaner than a junkyard dog?

Do you start with the private-equity firms that saw the silver lining of the mortgage crisis, when eight million Americans lost their homes? The companies like Blackstone that became the biggest residential landlords from California to Spain, driving up the rents of “distressed” homes by 50 percent exactly where tenants could least resist?

Do you start with the everyday slum stories on social media? Do you search “landlord won’t fix” on Twitter? Do you talk about Margaret Tam? Anne Kihagi? Veritas?

In other words, do you start with a particular parasite?

Forget it. Let’s start with all of them.

Any tenant can tell you what a landlord is—although websites like the Landlord Association’s won’t. A landlord is the guy with the special piece of paper, the guy whose side the cops will take. Your average landlord is four times richer than the typical American, and like any good villain got richer still in the 2010s. They weren’t worried about your stagnant wages, because they don’t do wage labor. They get richer by changing their minds about how much they charge you to live.

Landlords used to be picked by kings. The king says you’re a lord, you’re a lord. Now it’s on a cash basis: get enough gold in one place, you’re a lord. Uncle Sam deeds you a Community Chest card saying you “own” a square of the Earth, all toppings included.

Somewhere upstream, the government decided that it owned that bit of land, or finessed it with bad treaties, or borrowed and never gave it back, depending where you live. Generally speaking, you don’t get a break for buying stolen goods, and doing it knowingly is a crime, but this doesn’t apply to land. With land we scroll up to the first legal transaction and start counting there.

The important thing is the state’s promise to defend that deed with blue lives. We imbue our unofficial national motto of “This is my property” and its variants with a religious intensity, but that’s all they are—expressions of conviction. Without the threat of force, “own” doesn’t mean jack. And in many states, “you own it” means exactly “kill whom you please.”

From then on, people who need a home ask the lord. They compete for the opportunity to give the lord money, and whoever can pay most sets the “market rate,” i.e. the most the lord can charge and still count on finding a buyer. That number goes up steadily—much more steadily than your pay. Whatever you do, odds are your landlord makes way more.

If they expect enough profit, a special kind of landlord called a “developer” hires working stiffs to build more apartments, offices, and factories, and sells them to another landlord, or keeps them, depending on how the developer feels. (The people who do the actual building are not lords.) The developer explains if pressed that there’s no other way to efficiently house humans, even if history begs to differ.

But we don’t get our water strictly because someone expects profit. We don’t build sidewalks as cash cows. Urban transit isn’t provided as a moneymaker. These goods let society function, and sometimes there is profit in providing them, but the profit isn’t the motivation for doing so.

Maybe your landlord isn’t a villain. Maybe they’re nice. Maybe the company evicting the Oakland moms didn’t hire Chevron’s PR guy from the time Chevron was sued by indigenous people for I-said-allegedly wrecking the Amazon. Maybe the land needs a lord after all.