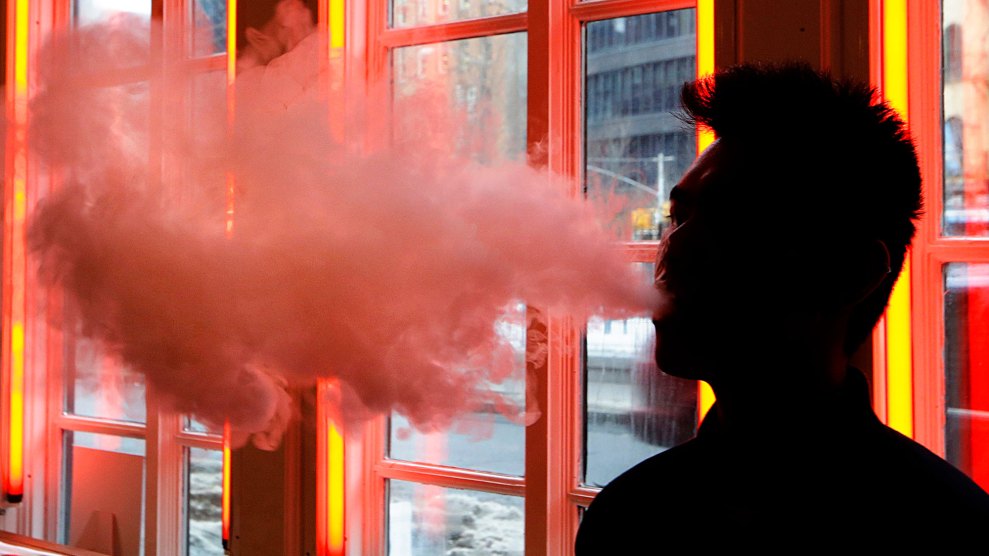 Congress is raising the legal smoking age across the country next year, after the Senate passed a bill that included a prohibition on selling cigarettes, vaping products, and other tobacco products to people under the age of 21.

The measure, part of a $1.37 trillion spending bill that passed the House on Tuesday and the Senate on Thursday, is expected to be signed by President Donald Trump before the end of the year, BuzzFeed News reports. The new age limit would take effect about nine months after the bill is signed into law.

Less than a quarter of high school seniors report having ever smoked a cigarette, and only about 3.6 percent report smoking daily in 2018, according to the US Department of Health and Human Services. But vaping rates are soaring among young people. In January 2018, about 21 percent of 12th graders reported vaping within the last 30 days, according to a National Institute on Drug Abuse survey—about double the rate in January 2017.

The rising vaping rates among teenagers, coupled with an outbreak of vaping-related lung injuries and deaths this year, led Trump to propose banning flavored vaping products, but he reversed course last month, reportedly due to fears of losing electoral support. And it lent urgency to a national push to raise the smoking age in states and municipalities this year. By the American Lung Association’s count, 19 states have already passed laws raising the age to 21. Those bills enjoyed the extensive support of major tobacco companies including Juul Labs, which has been previously criticized for pushing marketing campaigns that lawmakers believe were targeted at teenagers. As my colleague Jacob Rosenberg wrote in August, some of the state-level bills supported by Juul’s lobbying are more complicated than they seem:

In the last year, 12 state legislatures have passed laws that raise the age, including high-population states like Texas and New York. Some are backed by organizations like the American Lung Association. But many came into those statehouses as model legislation from health care advocates that was “transformed” by tobacco companies, according to a USA Today analysis of the proposed tobacco 21 bills. The catch is that the Juul-backed state bills sometimes include extra provisions that advocates fear could actually undermine the effort to stop teens from smoking, like one that could preempt stricter local enforcement of tobacco laws.

“In Virginia, Arkansas, and Utah, [Juul] swept in a horde of lobbyists” to help pass “terrible, unenforceable, tobacco ordinances,” said Dr. Rob Crane, president of the Preventing Tobacco Addiction Foundation, a group that lobbies to raise the age for buying tobacco to 21. Two of the bills lacked enforcement measures. Virginia’s law punishes only retailers, not tobacco companies, with small fines—at most $2,500 for three violations. There, a tobacco company representative even helped explain the legislation to the committee. Arkansas’ law prohibits local governments from regulating tobacco sales. Utah’s chapter of the Cancer Action Network, citing similar problems, even lobbied against the bill that would raise the age to 21. Local health advocates, who have fewer resources than Juul, found themselves overpowered when it came to creating regulation and pushing it in state legislatures.

The national measure that passed on Thursday was also pushed by Juul, as well as by Altria, the maker of Marlboro cigarettes. Introduced by Senate Majority Leader Mitch McConnell (R-Ken.) and Sen. Tim Kaine (D-Va.), it was backed by lawmakers of both parties. But some critics have raised alarms that the bill could actually provide a new opening for Juul and other companies to influence state tobacco legislation as states without 21-and-up smoking laws are effectively forced to update their statutes accordingly.

All that legislating happening at once could make it difficult for health advocates with less funding to compete with the tobacco industry to make sure those laws contain strict enforcement measures, critics argue. “We’ll be battling the industry—Juul, who has been hiring lobbyists like there is no tomorrow—on many fronts at one time,” Crane told Rosenberg.