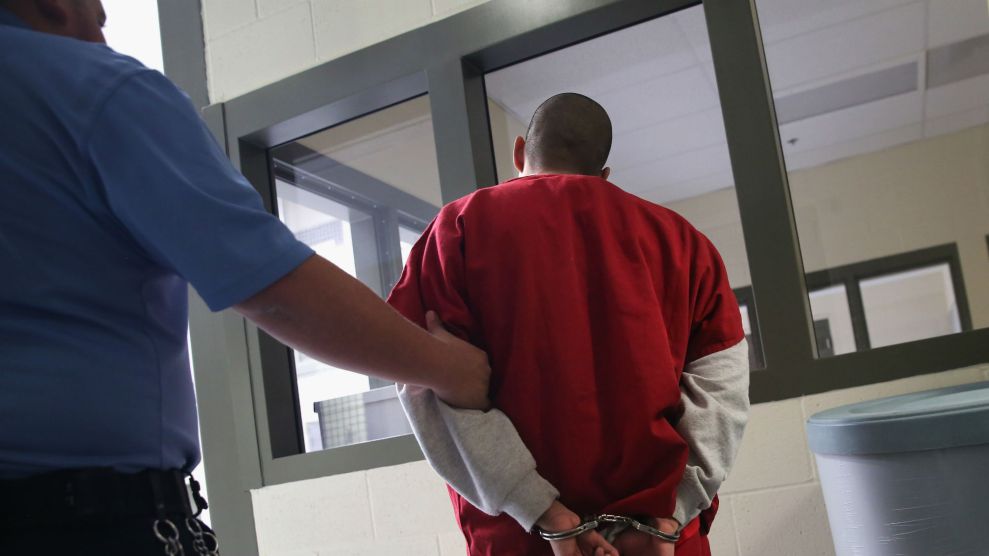 A guard escorts an immigrant detainee at the Adelanto Detention Facility in California.John Moore/Getty

In 2016, Donald Trump ran for president on an immigration platform that promised to close the southern border, end the “catch and release” policy, and implement a “zero tolerance” approach to anyone crossing the border illegally. While the current immigration detention system cannot be solely attributed to Trump—for the last 25 years, every US president has contributed to its growth—it is under the current administration that the number of migrants in detention has reached an all-time high.

More detainees means more detention facilities, especially ones run by private prison companies. Using data from Immigration and Customs Enforcement compiled by the advocacy group Freedom for Immigrants, Mother Jones mapped all facilities currently working with ICE to detain migrants. The map shows a surge in for-profit detention centers, particularly in Louisiana and Texas, as well as an increase in the detention of families and kids.

ICE had the capacity to detain only about 2,000 people in Louisiana and Mississippi at the start of Donald Trump’s presidency. But contracts signed with private prison companies in the past year have pushed ICE’s capacity in those states above 10,000 people. The horrifying conditions uncovered by Mother Jones at the Winn Correctional Center in Louisiana and by the Nation at Adams County helped push Barack Obama’s Justice Department to move to end its use of private prisons. Since June, ICE has started sending asylum seekers to both of those prisons.

Despite a February directive from Congress to detain fewer people, ICE has continued to house more and more immigrants in the South, often in facilities run by LaSalle Corrections. This move toward Southern states is particularly damaging for migrants waiting for their court date:

Concentrating asylum seekers in Southern states makes it particularly likely that they will lose their cases because of the region’s harsh judges and shortage of immigration lawyers. There are not enough judges in Louisiana to hear the new cases, and there are no immigration courts in Mississippi. As a result, many of these new asylum seekers will be forced to represent themselves in video hearings with out-of-state judges.

Increase in families and kids in detention

Part of Trump’s immigration dragnet was his “zero tolerance” policy toward migrants crossing the border. This policy led to the separation of families that caused an uproar in 2018. In March 2019 alone, the US Border Patrol detained 53,000 family members crossing the border between official ports of entry, a record-breaking number. Officials said the number represented a 374 percent increase in family arrests between October and March compared to the same time period in 2017-2018. As Mother Jones reported at the time:

Out of the 103,000 apprehensions in March, more than 53,000 were family units and almost 9,000 were unaccompanied minors. Historically, the number of migrants at the border goes up every month until the beginning of summer. Border Patrol took more migrants into custody last month than in any March since 2007.

That number hit another record high in May 2019, with Customs and Border Protection reporting 84,486 families detained. The following month, the Trump administration requested $4.5 billion in emergency funding to address the influx of children and families at the southern border. Most of that money was meant to house unaccompanied children who cross the border, but the federal government also asked for additional funds to increase overall detention capacity:

The administration is also requesting an additional $341 million so that Immigration and Customs Enforcement can detain more adults and families. The request comes less than three months after Congress told ICE to significantly cut the number of immigrants it detains.

Fueled by the administration’s deportation dragnet, Immigration and Customs Enforcement has predicted a surge in its daily population of detainees, from around 34,000 in July to more than 51,000 over the next year—and prison companies are more than happy to accommodate. In April, GEO Group executives won the administration’s first private immigration detention contract, for a facility in Conroe, Texas, that’s expected to bring in $44 million annually. This year the company also started operating an ICE detention center in Folkston, Georgia, that could boost its revenue another $21 million.

Federal inspectors have consistently found that many of these facilities violate health and safety standards. In an October 2018 report, DHS inspectors found that the Adelanto Detention Facility in San Bernardino County, run by GEO Group, was violating ICE’s detention standards. In August, 15 immigrants filed a class-action lawsuit against ICE for “failure to ensure constitutionally adequate medical and mental health care.”

A number of states have begun cutting ties with private prison companies. Most recently, California banned all for-profit prisons in the state, including those that contract with ICE for immigrant detention. A few days after Gov. Gavin Newsom signed the ban, ICE began looking for ways to circumvent the law. As I reported in October, ICE tried to rush into signing new contracts for four facilities before the California ban goes into effect in January 2020. Last Friday, the feds approved the contracts.